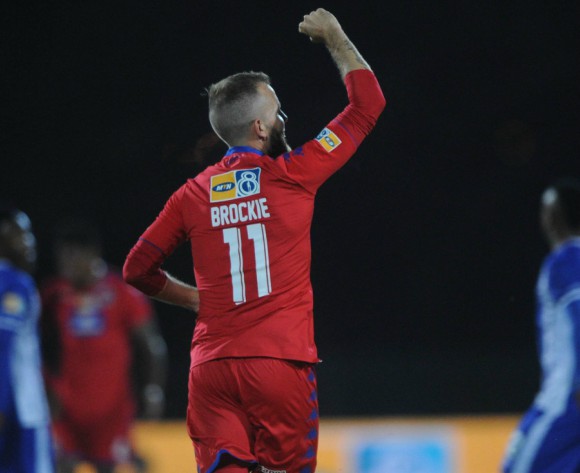 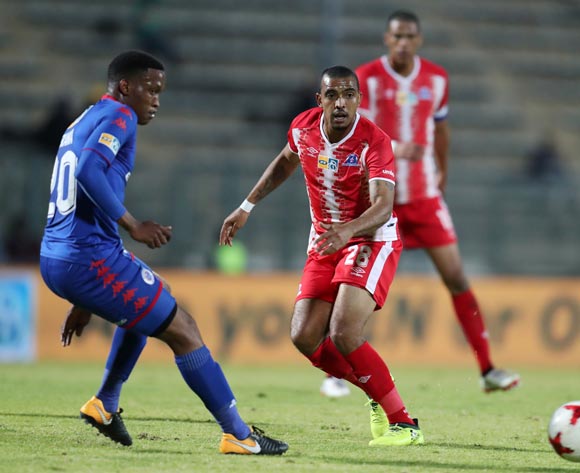 1' The match is underway!
3' The first chance of the match goes the way of SuperSport, with Grobler getting on the end of Modiba's cross and heading just wide of Mpandle's right-hand post!
6' SuperSport looking to play it wide and cross whenever they get the chance, while Rusike looks to use his pace for the hosts but is soon crowded out by red shirts.
8' Van Wyk cuts in from the right and lets fly with his left, but the long-range effort drifts wide of the target.
9' ?Van Wyk plays a wonderful pass to put Shandu free down the right, but his attempted cross is sliced high and wide.
11' An unconvincing punch from Mpandle at a SuperSport corner kick and it ends with Brockie slicing an effort off target.
14' Jeremy Brockie (SuperSport Utd) scores!

15' SuperSport claim a deserved lead, with Modiba crossing from the left by-line to find Brockie, whose header has just enough pace to beat Mpandle!
16' Matsatsantsa have cancelled out Maritzburg's away goal and lead 2-1 on aggregate.
17' Gould with a lunging tackle that has the Maritzburg bench screaming, but the referee waves play-on. Now Shandu crosses from the left and it's just beyond the reach of Rusike, who would have had a tap-in!
20' A good battle between Brockie and Xulu - the striker has got the better of it so far, having scored a fine opening goal.
23' Midway through the first half, SuperSport lead 1-0 on the night and 2-1 on aggregate.
26' Maritzburg building up a head of steam, but they have lacked composure and penetration in the final third. SuperSport's defence is yet to really be tested...
28' Mekoa gets a stern talking-to after tripping up Mokoena in midfield.
29' Phala chips a cross to the back post, Brockie is completely unmarked, but he slices his volley off target! Great chance spurned by the away side!
31' SuperSport on a quick counter-attack, Letsholonyane picks out Phala, who turns and shoots just wide of the mark!
34' Siphesihle Ndlovu (Maritzburg Utd. ) is cautioned.

35' Maritzburg's Ndlovu is lucky to get on a caution for a leg-breaker challenge on Kekana, who luckily doesn't seem to be seriously injured.
36' Less than 10 minutes left in the first half, SuperSport will be happy with their work so far.
39' Daniels with a chance to cross from the left, but his ball is cut out and cleared by Makaringe.
41' Makaringe with a snap shot from long range, but it's high and wide.
44' Jeremy Brockie (SuperSport Utd) scores!

45' The visitors extend their lead and put one foot in the final! A quickly-taken free kick sees Kekana float a diagonal to the far post, Mokoena heads back across the face of goal and Brockie nets with another header!
45 + 2' The referee brings the first half to an end.

46' The second half is underway
47' Deolin Mekoa (Maritzburg Utd. ) is cautioned.

50' Fransman earns cheers from the home fans for a crunching, but fair tackle.
53' A frantic start to the second half, with neither side able to settle down and get into rhythm.
56' Rusike with a superb cross from the right, Fileccia can't finish from close range but he was offside anyway.
57' Dean Furman (SuperSport Utd) is cautioned.

61' Corner to Maritzburg, Atouba crosses but United defend well initially before a second ball into the box is claimed by Williams.
63' Gould with a fine defensive header from a free kick. Maritzburg are turning the screw here, it seems only a matter of time until they get back in the game...
65' Ronwen Williams (SuperSport Utd) is cautioned.

66' Rusike with a sight of goal, but Daniels comes across to make a superb sliding challenge!
67' SuperSport Utd: Sifiso Myeni replaces Bradley Grobler

70' Atouba shoots on goal but it's an easy save for Williams. It's looking like SuperSport's night, despite a much better second half showing from Maritzburg.
71' SuperSport Utd: Siyabonga Nhlapo replaces Reneilwe Letsholonyane

75' Sublime double save from Williams to deny Mekoa and Fileccia, and the flag was up anyway!
78' Atouba Yazid (Maritzburg Utd. ) is cautioned.

82' The referee has also sent Maritzburg's physio to the stands. Not a great night for the Team of Choice...
86' All the sting has gone out of the game now, SuperSport are very much in game management mode.
90' There will be four minutes of added time.
90 + 4' The referee blows the whistle for Full Time.