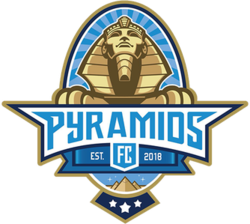 As a result, the Egyptian side booked their place in the final where they are set to face Moroccan outfit RS Berkane, while Guinean champions Horoya crashed out of the tournament.

Pyramids controlled the match from the start with Omar Gaber pulling the strings from the midfield for the Egyptian side.

The first real chance of the game came 17 minutes into the encounter after the Horoya defence was exposed.

However, Horoya goalkeeper Moussa Camara was alert and he produced a magnificent save to deny Mohamed Farouk.

Camara was the busier of the two keepers as he was called into action seven minutes before the half-hour mark and he gathered Gaber’s long-range shot.

The last goalscoring opportunity of the first-half fell for Gaber after some good work by his teammate Eric Traore in the 37th minute.

However, Gaber’s effort was cleared off the goal-line and the score was 0-0 at the interval following a first-half which was dominated by Pyramids.

Pyramids continued to dominate possession after the restart, but the Guinean champions’ defence looked solid and compact as they contained Ante Cacic’s side.

Hassan made an immediate impact as he netted in the 74th minute with a low shot which went through Camara’s legs to make it 1-0 to Pyramids having being set-up by Gaber.

It was soon 2-0 to Pyramids when Farouk set-up Abdallah El-Said, who cut inside before beating Camara with a brilliant finish.

Attacker Alseny Camara Agogo was introduced in the closing stages of the game by Horoya coach Lamine N’Diaye and he scored in the 86th minute, but the goal was disallowed for offside.

Ultimately, the match ended in a 2-0 victory in favour of Pyramids, who contained Horoya in the dying minutes of the match.

Pyramids out to upset AC Horoya

Pyramids will square off wth AC Horoya in the 2019/20 CAF Confederation Cup semi-final match on Tuesday.

The game is set to be played at the Prince Moulay Abdellah Stadium in the capital city of Morocco, Rabat.

Pyramids progressed to the last four after defeating Zambian giants Zanaco 3-1 on aggregate in a quarter-final tie in March 2020.

The Egyptian side claimed an impressive 3-0 win in the first-leg encounter in Zambia, but they succumbed to a 1-0 defeat in the return leg in Cairo.

Prior to the defeat to Zanaco, Pyramids were undefeated in two Confederation Cup matches having recorded two consecutive wins.

Meanwhile, Horoya eased into the semi-finals after thrashing Nigerian giants Enyimba 3-1 on aggregate in a quarter-final tie in March 2020.

The Guinean giants were held to a 1-1 draw by Enyimba in the first-leg match in Nigeria, but they managed to secure a 2-0 in the second-leg match at home.

As a result, Horoya are undefeated in their last 10 matches in the Confederation Cup having recorded three draws and seven victories.

The winner between Pyramids and Horiya will face either RS Berkane and Hassania Agadir (both from Morocco) in the final.

The final is set to be played at the Prince Moulay Abdellah Stadium in the capital city of Morocco, Rabat on October 25.