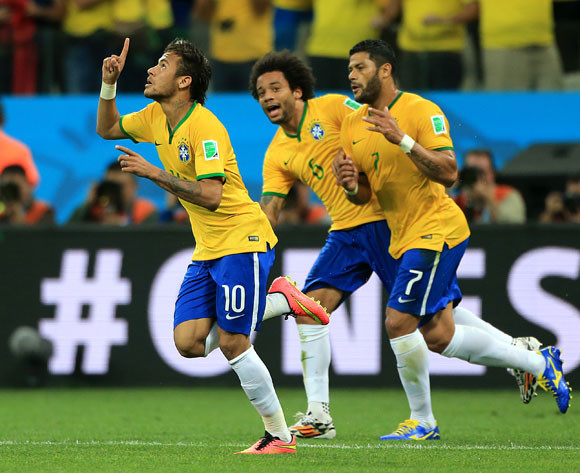 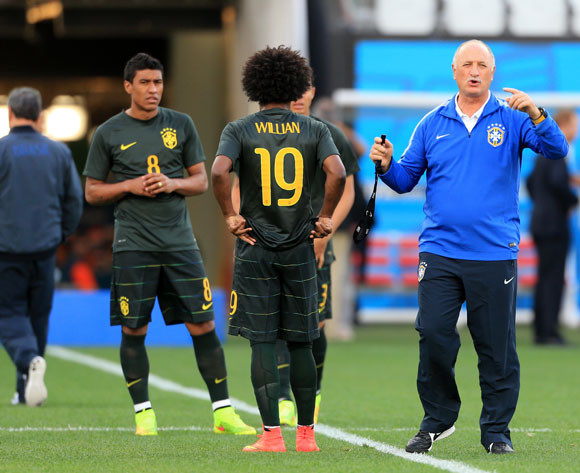 Welcome to the live play-by-play for the 2014 FIFA World Cup Brazil match between Brazil and Croatia at Arena de Sao Paulo.

Welcome to the live play-by-play for the 2014 FIFA World Cup Brazil match between Brazil and Croatia at Arena de Sao Paulo.

Neymar Junior scored a brace for Brazil as they defeated Croatia 3-1 in the opening match of the 2014 FIFA World Cup at the Arena de Sao Paulo on Thursday night.

The Croatians took an early lead through an own-goal from Marcelo but a long range effort from Neymar saw the two sides going into the break deadlocked at 1-1.

Neymar then handed the home side the lead from the penalty spot midway through the second half, before Oscar added a third late in the game to send his side to the top of Group A.

The Vatreni came close to breaking the deadlock in the 7th minute when Ivan Perisic’s inswinging cross found Ivica Olic at the far post, but his downward header went wide of the upright.

The opening goal did come four minutes later when Olic broke through on the left before drilling a low cross into the box; Nikica Jelavic got a faint touch onto the ball before Marcelo bundled it into his own net.

Brazil pushed forward in search of the equaliser but Croatia goalkeeper Stipe Pletikosa stood his ground, blocking a solid shot from Paulinho in the 21st minute, before parrying Oscar’s curled effort a minute later.

The hosts eventually levelled matters in the 29th minute as Neymar beat a diving Pletikosa with a low shot from outside the area, which brushed the inside the post on its way to the back of the net.

The second half started at a slow pace with neither side firing shots at goal and it was only in the 67th minute that Dani Alves fired a dipping freekick just over the crossbar after Neymar had been fouled by Vedran Corluka.

Brazil were then awarded a penalty in the 71st minute as Dejan Lovren was adjudged to have pulled down Fred inside the box; Pletikosa did get a hand on Neymar’s penalty kick but could only help the ball into the net.

Luis Felipe Scolari’s side came close to extending their lead six minutes later when a cross from Oscar found David Luiz unmarked at the far post, but he was unable to get enough contact on the ball and his header sailed wide of goal.

Croatia did get the ball into the back of the net in the 83rd minute following a goalmouth scramble, but the goal was disallowed as Olic was adjudged to have fouled the Brazilian goalkeeper Julio Cesar.

Cesar was then called into to keep his side in the lead, diving low to his right to parry a grasscutter from Luka Modric in the 86th minute, before blocking a powerful strike from Marcelo Brozovic in the first minute of added time.

Brazil broke forward immediately and were rewarded with a third goal as Oscar outpaced two Croatian defenders before poking the ball past Pletikosa from outside the penalty area.

The win put Brazil in first place with three points, while Croatia drop to the bottom of the table with no points and a negative goal difference.

The next Group A encounter will take place on Friday night when Mexico take on Cameroon at the Estadio das Dunas in Natal.

Brazil will be aiming for nothing less than three points when they kick-off the 2014 World Cup against Croatia at the Arena de São Paulo on Thursday evening. Kick-off is at 22h00 (CAT).

The hosts are under massive pressure heading into the opening game and will be eager to relieve the suffocating demand.

Head coach Luiz Felipe Scolari has the luxury of being able to pick the same XI that thrashed Spain 3-0 in the final of the 2013 Confederations Cup final, with Neymar the focal point of a powerful attacking line-up.

Brazil head into the World Cup on home soil in good form, having registered nine straight wins heading into the finals with their last defeat coming against Switzerland in August last year.

‘A Selecao’ have in fact only lost twice in their past 22 competitive games.

The five-time world champions, who won the trophy under Scolari in 2002, are expected to cruise through to the knockout stages, but Barcelona fullback Dani Alves admitted the hosts are nervous heading into the Group A opener.

"I have always said that if you don't feel anxiety it is not worth being a professional athlete. The opening game is difficult, important," said Alves.

"The three points count but so does the idea of sending out a message to our rivals. The most important game at the World Cup, for everyone, is the opening game."

The 31-year-old added: "We will only know on Thursday if everything is OK. We are very confident and we want this moment to come. We want to enjoy the World Cup. We are going to try to give a good image."

Croatia will be missing Bayern Munich ace Mario Mandzukic because of a red card he picked up in a match against Iceland in November and the man likely to replace him is Brazilian-born striker Eduardo, who admits it will be a little odd lining up against his country of birth.

The 31-year-old said of the game against Brazil: "Without a doubt this is a little odd, but I see it as a great opportunity too.

"I could never have imagined this situation: to be Brazilian and have the chance to play in a World Cup in your own country, but in the shirt of another national team," the former Arsenal star concluded.

Croatia midfielder Luka Modric, who recently won the UEFA Champions League with Real Madrid, is expecting a fierce contest in the middle of the park.

"Virtually every game is decided in the midfield. In most situations the winner is the team that has the better midfield," said Modric.

"I hope that we can show our qualities and can beat Brazil. But this will of course be very difficult."

"Neymar did not have the best of season with Barcelona, but when he plays for Brazil, he is a completely different player," said Modric.

"But I believe that we will find a way to stop him."

Croatia who finished third in France 1998 laboured to a 1-0 win over Australia in their final warm-up game.

The match will be played in the 61 600-capacity Corinthians Arena, which was delayed by accidents in which three workers were killed.