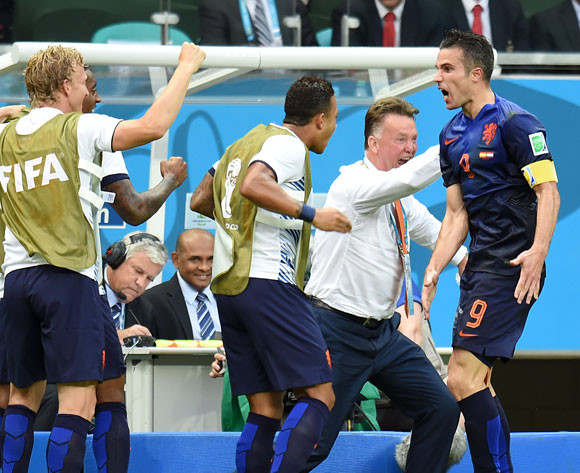 Welcome to the live play-by-play for the 2014 FIFA World Cup Brazil match between Spain and Netherlands at Arena Fonte Nova.

Welcome to the live play-by-play for the 2014 FIFA World Cup Brazil match between Spain and Netherlands at Arena Fonte Nova.

Robin van Persie and Arjen Robben scored a brace apiece as the Netherlands walloped World Champions Spain 5-1 in the 2014 FIFA World Cup Group B opener at the Arena Fonte Nova in Salvador on Friday evening.


Xabi Alonso opened the scoring for La Furia Roja while Stefan De Vrij also got his name on the score sheet as Spain suffered their worst defeat in 41 years.
In total 11 players who started in the 2010 FIFA World Cup final started in Salvador, seven from Spain and four from the Netherlands.

The first chance of the game fell to Sneijder in the eighth minute.

The Galatasaray midfielder was sent clean through on goal by Arjen Robben, but his resulting shot was straight at Iker Casillas who was up to the task.

Spain were awarded a spot-kick in the 27th minute.

Stefan De Vrij's trailing leg clipped Diego Costa who flung himself to the turf, to the dismay of the Dutch fans who felt he conned the referee, Xabi Alonso duly  stepped up and blasted the ball past Jasper Cillessen to net his second Wolrd Cup goal.

David Silva had a golden opportunity to double Spain's lead on the stroke of half-time, but his cheeky attempt was kept out by Cillessen who read the situation brilliantly.

Silva's miss proved to be costly as a minute before the break Robin van Persie provided a stupendous finish to level matters.

Daley Blind's pin-point ball picked out the Manchester United striker who produced a swan-like dive to meet the ball on the volley with his head, the Flying Dutchmen's attempt looped over a stranded Casillas and into the back of the net, to the astonishment of all those watching on, 1-1

The rain welcomed the sides out on the pitch, and no sooner the Netherlands pulled ahead through Robben.

The Bayern Munich winger took the ball down superbly before skinning Gerard Pique and finishing off with aplomb.

Van Persie almost made it 3-1 on the hour mark,  his powerful effort from the edge of the area had Casillas beaten all ends up, but not the crossbar.

De Vrij made amends with his first international goal in Dutch colours in the 64th minute, Sneijder's free-kick was bundled in by the  Feyenoord defender at the back post.

Van Persie completed his brace in the 72nd minute following an uncharacteristic mistake from the Spanish captain.

Casillas, who has been relegated to the bench for Real Madrid in the Spanish La Liga, surrendered possession inside his area with a heavy touch, Van Persie pounced before stroking the ball into an empty net, 4-1.

The unthinkable happened eight minutes later, as Robben completed his double to take the score to 5-1.

The former Chelsea speedster out-sprinted Sergio Ramos, before bamboozling a flailing Cassilas and then hitting the ball into the back of the net.

Chile face Australia in the second Group B match later this evening.