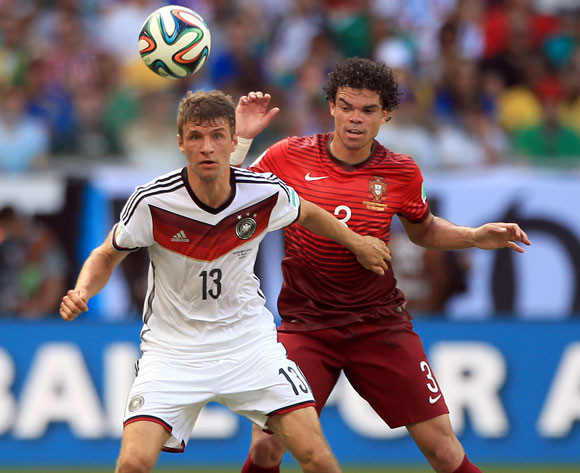 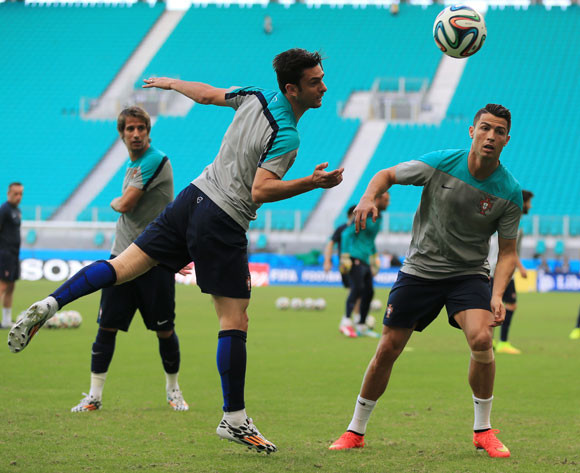 Welcome to the live play-by-play for the 2014 FIFA World Cup Brazil match between Germany and Portugal at Arena Fonte Nova.

1' The match is underway!
10' Joao Pereira (Portugal) is cautioned.

Welcome to the live play-by-play for the 2014 FIFA World Cup Brazil match between Germany and Portugal at Arena Fonte Nova.

Germany made short work of a calamitous Portugal as they romped to a 4-0 victory in their World Cup Group G opener at the Arena Fonte Nova in Salvador on Monday.

Thomas Muller scored a first hat-trick of his international career and Mats Hummer got the other as the Germans dominated their sorry opponents, who had Pepe sent off late in the first half for a head-butt.

It was a unprofessional piece of play that summed up the match for Portugal, who staggered from one disaster to the next to make a mockery of their talk in the build-up to the tournament that this could be their year.

Cristiano Ronaldo, who was booed by large sections of the crowd every time he touched the ball, showed flashes of his brilliance, but was unable to unlock the organized German defence.

As if the goals and red card were not bad enough, Portugal also lost influential players Hugo Almeida and, perhaps more importantly, flying wingback Fabio Coentrao through injury and they look doubtful for their next game against the United States on Sunday.

Germany were incisive on attack and might have had more goals but for some wasteful finished and last-gasp defending from the Portuguese.

Portugal showed their nerves early on when goalkeeper Rui Patricio passed the ball straight to Sami Khedira as he tried to shoft the ball of defence, leaving the German midfielder with an empty net to hit from 35-yards, but he put the ball wide.

They did not have to wait long for their opener though as Muller converted from the penalty spot on 11 minutes. Midfielder Mario Gotze went down in the penalty box from minimal contact from Portuguese defender Joao Pereira, but it was a clear penalty and a poor piece of play.

Germany made it 2-0 just past the half-hour mark as Hummels powered a header past Patricio from Toni Kroos’s corner as he left marker Pepe for dead in the penalty-box.

The frustrations of Pepe boiled over on 37 minutes when he believed Muller had made the most of a clash between the two and, with the German still on the ground, barged his head into the opponent. It was a clear red card for a player that is no stranger to controversy and acts of indiscipline on the field.

And it was 3-0 in first half injury-time as Muller got his second, capitalizing on some hesitant defending from Bruno Alves to get ahead of the defender and slam the ball home.

In a rare attack forward in the second half, Portugal thought they should have had a penalty when Benedikt Howedes hacked at forward Eder, but were incensed when nothing was given by referee Milorad Mažić of Serbia.

And soon afterwards Muller completed his hat-trick, turning home a cross from Andre Schurrle for his eighth World Cup goal in seven matches at the finals.

Germany face Portugal on Monday hoping to eclipse the Cristiano Ronaldo show and make an important statement about their 2014 World Cup ambitions.

The three-time World champions take on Portugal in a Group G opening game in Salvador in the two sides tenth-ever meeting but only their second at the FIFA World Cup.

Germany defender Per Mertesacker said a flying start was necessary  in a game that has been overshadowed by build-up headlines solely about Ronaldo's fitness.

"We’ve only got three games in the group stages, so we can’t afford any slip-ups," Mertesacker said.

"But what’s most important in the first match is that we send out a message to show ourselves and our rivals that we’re contenders for the title."

Meanwhile, Portugal who have suffered three successive defeats against the German juggernaut insist there is no cause for concern about their talisman Ronaldo who has reportedly recovered from a left knee injury.

"Regarding his physical fitness, that's more for the doctors and physios to reply but of course he's a very important player for us, the best in the world," Angolan-born Portugal striker William Carvalho said.

Portugal only win over Germany was during the latter's forgettable Euro 2000 outing in which they were flattened 3-0 in a Group A match on their way to a shock preliminary round exit with one point.
Report