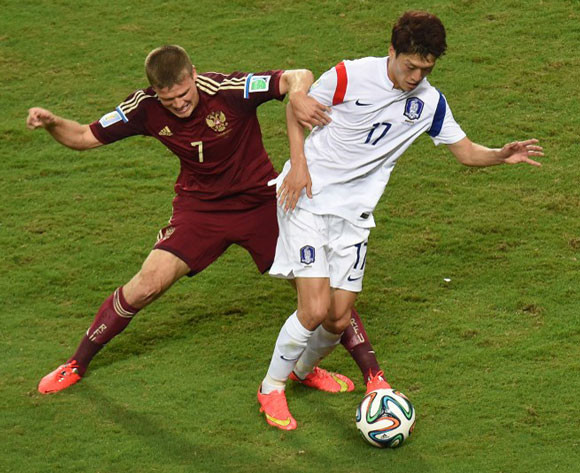 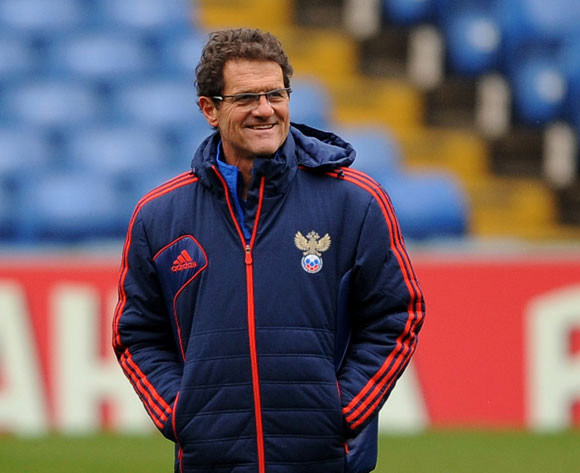 Welcome to the live play-by-play for the 2014 FIFA World Cup Brazil match between Russia and Korea Rep. at Arena Pantanal.

46' The second half is underway
49' Oleg Shatov (Russia) is cautioned.

Welcome to the live play-by-play for the 2014 FIFA World Cup Brazil match between Russia and Korea Rep. at Arena Pantanal.

South Korea and Russia produced the third draw at the 2014 World Cup after finishing 1-1 in Cuiaba in their Group H opener.

Tuesdays draw came just an hour after Brazil and Mexico finished scoreless and 48 hours after Nigeria and Iran played out to the same result on Monday.

The Koreans dominated  the first half but came a little short on the final mile.

Bolton midfielder Chung Young Lee threaded the ball to Chu Young Park  but the Watford striker was caught offside in the 9th minute.

A minute later, Bayer Leverkusen midfielder Heung Min Son sliced through Russia's defence with darting run but he elected to fire the ball high and over.

Russia survived four minutes later when Mainz striker Ja Cheol Koo's seemingly goal-bound shot from the edge of the area come off Ignashevich for a corner.

Russia made a bright second half start when Jung tapped over Viktor Faizulin's shot while Vasili Berezoutski's header from the resultant corner hit the side netting.

Meanwhile, the deadlock was broken in the 68th minute through Keun Ho Lee whose thundering volley was spilt on the near post by the highly-rated Akinfeev before the ball crossed the line.

Lee was on the pitch just 12 minutes after replacing  Chu Young Park.

However, that lead lasted just seven minutes when another substitute Alexander Kerzhakov scrambled  in the ball  from close range to equalise for Russia just three minutes after replacing Yuri Zhirkov.

South Korea and Russia have one point, two less than Group H leaders Belgium who rallied to beat bottom placed Algeria 2-1 earlier in the day in Belo Horizonte.

Russia face Belgium in Rio on June 22 while South Korea play Algeria on the same day in Porto Alegre.
Preview

The teams come into the game in contrasting form, the South Koreans off the back of a 4-0 hammering at the hands of Ghana in the USA last week, while Russia have not lost in 10 matches dating back almost a year.

Both sides will fancy their chances of reaching the second round in a pool in which Belgium are probably pool favourites, but which also includes inconsistent African side Algeria.

CSKA Moscow defender Vasily Berezutskiy says his side have prepared well and feel like they have a point to prove having last appeared at the global finals in 2002 – ironically a tournament co-hosted by South Korea.

"We have things to prove in this World Cup," Berezutskiy said. "It's been 12 years since Russia have participated in the World Cup so our objective is to play more than three games, try to qualify from our group and after that we will see.

"For us the next game is the most important one so we're focusing on Korea. I think Belgium are the favourites because they have a young and quality team and can improve."

Russia have shown a vast improvement under coach Fabio Capello, who is the highest paid tactician at the tournament earning £6.6-million per year, almost double that of the next highest, England’s Roy Hodgson.

Russia will want to get their monies worth and Berezutskiy believes they are doing that so far.

"Capello demands discipline and it's a good thing because everyone is working hard, giving 100 percent in every session," he said.

South Korea need to regroup ahead of their opener after a torrid time that includes a 2-1 friendly loss to Russia last November.

Defender Lee Yong says they will get better and believes the tropical weather in Cuiaba could be an advantage for his side, even if it is not something they are banking on.

Much has been made of the Asian sides struggling with the physicality of matches at the tournament, but Lee says his side have a plan.