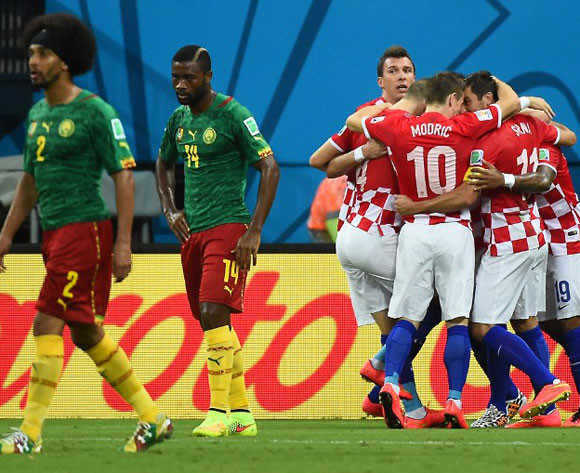 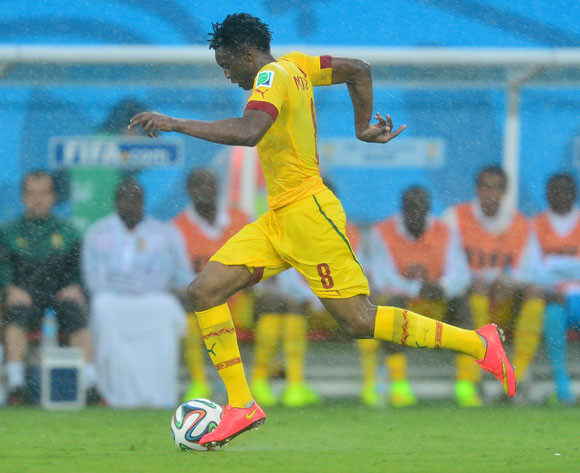 Welcome to the live play-by-play for the 2014 FIFA World Cup Brazil match between Cameroon and Croatia at Arena Amazonia.

After losing the opening game 1-0 to Mexico, the Cameroon team needs to prove a point today that they are indeed Indomitable Lions.
The two teams are warming up on the pitch ahead of the crucial match.
The national anthems are played as the two teams parade ahead of kick-off.
1' The match is underway!
1' Referee Pedro Proenca from Portugal gets the game underway/
2' Benjamin Moukandjo side nets for Cameroon.
2' Croatia defenders clear away a free kick.
3' Cameroon gets first corner kick.

6' Another free kick for Cameroon close to Croatia's goalkeepers' box.
7' The Indomitable Lions have started the game with lots of intent.
10' Charles Itandje in time to stop a Croatia raid
11' Ivica Olic (Croatia) scores!

11' Croatia takes an early lead.
12' The Cameroon defenders fail to keep their markers yet again.
13' Mario Mandzukic (Croatia) tries along shot that misses target.
15' Lots of pressure in the Cameroon box as they defend in numbers.
15' Corner for Croatia....followed by another corner.
20' Mbia wasteful for the Lions.
21' Corner kick for Cameroon which comes to nothing.

40' Alex Song uses his hand against Mario Mandzukic in an off the ball incident.
45 + 1' The referee brings the first half to an end.

46' The second half is underway
48' Ivan Perisic (Croatia) scores!

50' Cameroon survive yet another attack as their defenders are failing to contain the Croatia strikers.
52' Nounkeu's effort misses target for Cameroon.
57' Croatia get a free kick close to the Lions' goal which sails over the crossbar.
59' Skipper Srna misses target for Croatia off the free kick.
60' Modric's strike is deflected for a corner kick, cleared by Cameroon.

62' The Cameroon defenders failed to position well to stop the corner kick giving Mario space to score.
64' Cameroon get a corner kick, cleared by Croatia.

85' Moukandjo with a chance fails to pull one back for the Lions.
89' Eduardo (CRO) (Croatia) is cautioned.

Cameroon have been knocked out of the 2014 FIFA World Cup by Croatia who were simply better on the night.

Welcome to the live play-by-play for the 2014 FIFA World Cup Brazil match between Cameroon and Croatia at Arena Amazonia.

Miserable Cameroon out of World Cup

Four time African champions Cameroon are out of the on-going 2014 FIFA World Cup after miserably falling 4-0 to Croatia in a Group A match played on Thursday in Brazil.

The 10-man Indomitable Lions failed to contain the Croatian team that ran rings around them from the start of the game played at the Arena Amazonia. Cameroon now joins defending champions Spain as mere participants after they were earlier ejected by Chile.

Ivica Olic started it all with the opening goal in the 11th minute after the Cameroonian defenders were caught off guard.

With five minutes to half time an off the ball incident earned Cameroon’s Alexandre Song a straight red card to give the opponents more advantage.

On resumption, Ivan Perisic who made it 2-0 against the run of play, while Mario Mandzukic added two more goals to give his team a chance to step foot into the knockout stage if they can beat Mexico in the last Group game.

It was evident that the Cameroon team that lost 1-0 in their opening match to Mexico failed to close the spaces which gave the Croatian team opportunity to enjoy lots of possession.

With the Indomitable Lions missing their inspirational skipper Samuel Eto’o who was injured, their tactical awareness was lacking and Song’s sending-off did not make matters any better.

Not even the introduction of Danny Nounkeu, Edgar Salli and veteran Pierre Webo could save the Indomitable Lions.

Cameroon will now hope to prove a point to doubters when they face hosts Brazil in their last Group A game.

Defeated 1-0 by Mexico in their 2014 FIFA World Cup opener in Group A in Natal on Friday, Cameroon are left with no choice but to win when they face Croatia in Manaus on Wednesday.

But to reach their objective, the Indomitable Lions will have to drastically improve their game after displaying a poor performance against ‘El Tri’.

Samuel Eto’o and his teammates struggled in all the compartments of the game, never appearing in a position to unsettle their opponents.

Weakened by a recurrent knee injury, the Lions’ skipper clearly lacked his usual attacking flair and his participation in their battle for survival against the Croatians is hugely compromised.

However, Cameroon still believe in their chances to bounce back in the second encounter of their Brazilian campaign and to make it to the next round.

“It won’t help to tell ourselves that it is over. We have lost a game, but it doesn’t mean that we have lost our chances of qualification,” forward Benjamin Moukandjo said in a press conference.

With their backs to the wall going into this match, national coach Volker Finke knows that there is only one option for the Cameroonians should they intend to extend their stay in Brazil.

“We must be ready to face the challenge. They have great players plying their trade in Spain and Germany and we must remain very cautious even if we both lost our first game. It doesn’t help to talk anymore, we must just win to remain in the competition,” the German admitted.

Croatia are indeed under great pressure as well, after falling 3-1 to the host nation in the tournament’s opening game. But they will try to build on their good display against Brazil to bounce back when they face the Lions.

“I really am very proud of Croatia despite the defeat because I know that we came up against a great team in every sense of the word. We put in a fantastic performance, from the first minute to the last. Brazil were very strong but we deserved at least a point. I’m proud because we showed that we can survive the group phase,” coach Nico Kovac told the media.

The latter will be pleased to welcome back Bayern Munich striker Mario Mandzukic, suspended for their World Cup opener, but is still sweating over the fitness of Real Madrid playmaker Luca Modric.

The game will kick-off at 18h00 CAT at the Arena Amazonia.