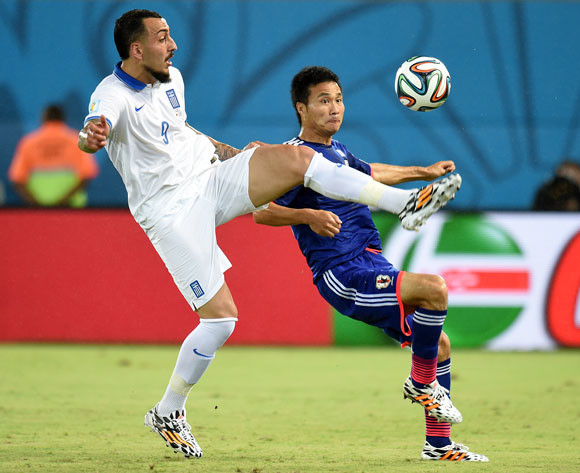 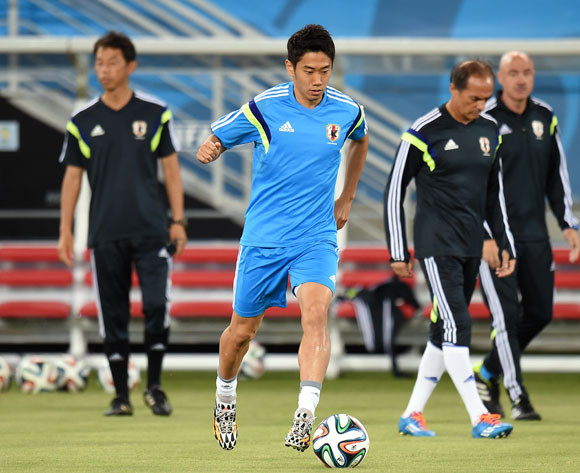 Welcome to the live play-by-play for the 2014 FIFA World Cup Brazil match between Japan and Greece at Estadio das Dunas.

1' The match is underway!
12' Makoto Hasebe (Japan) is cautioned.

38' Kostas Katsouranis (Greece) is sent off.

46' The second half is underway
54' Giorgos Samaras (Greece) is cautioned.

Welcome to the live play-by-play for the 2014 FIFA World Cup Brazil match between Japan and Greece at Estadio das Dunas.

Japan and Greece in goalless draw

Despite playing with a numerical advantage for most of the game following Konstantinos Katsouranis' dismissal, Japan could not break the deadlock as they drew 0-0 with Greece.

The stubborn defensive display by Greece saw them hold on for a scoreless draw against Japan in Natal on Thursday, which ensured that group leaders Colombia will play in the round of 16 in Brazil.

Colombia, with six points atop the group, had defeated Ivory Coast 2-1 earlier on Thursday and won a place in the knockout stages at their first World Cup since 1998.

The Japanese played the entire second half with one less player, after skipper Kostas Katsouranis was red carded seven minutes before half-time.

Katsouranis went into the book for the first time in the 27th minute when he slid into the back of Yuya Osako and his trip to halt Japan captain Makoto Hasebe's break away just 11 minutes later was the end of his match.

Japan coach Alberto Zaccheroni dropped Shinji Kagawa for Yoshito Okubo. Kagawa had been largely invisible against Ivory Coast but the sight of him on the bench at the Arena das Dunas was still a shock, with the playmaker having started all but one of his country's last 12 matches.

It took 10 minutes before the first genuine scoring chance was created; Panagiotis Kone powered through midfield before shooting powerfully straight at Eiji Kawashima.

Japan had over 75 per cent possession in the first half but generally struggled to test Orestis Karnezis with Okubo shooting tamely at Greece's goalkeeper and curling another effort wide either side of the 20-minute mark.

After the half time break, Zaccheroni brought on Yasuhito Endo for Hasebe in a bid to inject some creativity into Japan's line-up. Then Kagawa was recalled in the 57th minute at the expense of Osako.

But despite the two substitutions, Japan still struggled to break down Greece's stubborn defence and while they did get wide and delivered some crosses, the end product was sorely missing.

Japan continued to bombard Greece's goal, with Okubo wasting the best chance when he blazed wide in the 68th minute.

Greece desperately held on to frustrate Zaccheroni's side and leave both teams needing a win in their final game to advance from Group C.

D-Day For Japan and Greece

Japan and Greece battle in a do-or-die  Group C tie in Natal on Thursday night.

Asian champions Japan and 2004 Euro winners Greece both head into their penultimate Group C match on zero points following 2-1 and 3-0 defeats to Cote d'Ivoire and Colombia respectively on June 14.

The meeting coincidentally comes nine years to the day since their last meeting in the 2005 FIFA Confederations Cup Group B match in Frankfurt that Japan won 1-0 on June 19.

Japan's starman and AC Milan playmaker Keisuke Honda said they had learnt valuable lessons from their loss against Cote d'Ivoire after squandering a 1-0 lead.

The pressure is  very much on Samurai Blue who are battling to advance to the last 16 for a second successive FIFA World Cup.

"The last game we lost the ball too easily so that is how we spent a lot of energy in the first half, that is the point. That is why we must concentrate on keeping the ball," Honda said.

Meanwhile, Greece forward Georgios Samaras said they had not lost any belief in what they can do in Brazil as they seek to quickly recover from the Colombia defeat as they also battle to avoid a third successive group stage elimination.

"They're a good team (Japan), for sure," said Samaras.

"We already know their players as individuals, and between now and kick-off we'll look at them closely as a unit. We want to see where their strengths are but also where they are weaker; where they leave open spaces that we can exploit and create chances."
Report