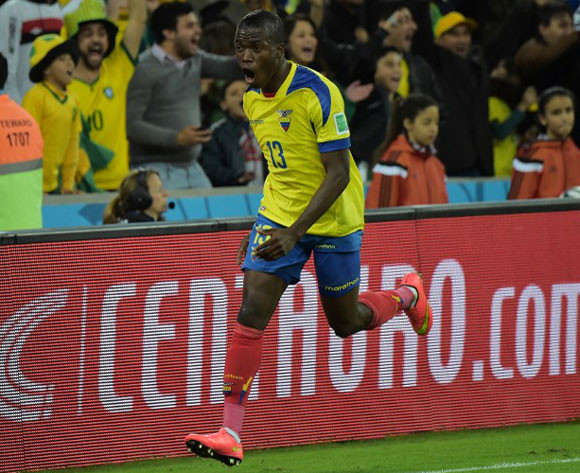 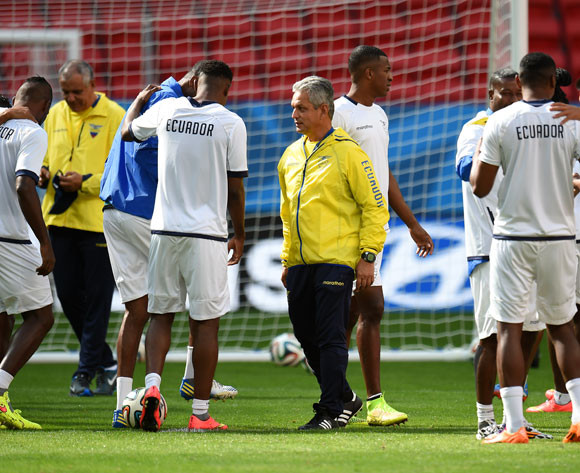 Ecuador coach Reinaldo Rueda with his players during training

Welcome to the live play-by-play for the 2014 FIFA World Cup Brazil match between Honduras and Ecuador at Arena da Baixada.

Welcome to the live play-by-play for the 2014 FIFA World Cup Brazil match between Honduras and Ecuador at Arena da Baixada.

Goal scoring machine, Enner Valencia, bagged a brace on the night to save Ecuador’s 2014 FIFA world Cup campaign when they beat Honduras 2-1 in a Group E match at the Arena da Baixada on Friday.

The result sees Ecuador up to second in the Group on three points behind France with six points. Switzerland are third in the group with three points while Honduras are bottom with zero points.

Any of the four of the teams can still qualify for the knockout stages of the competition if they win their last group game. France will take on Ecuador and Switzerland will play Honduras.

It was a scrappy start to the game with both sides squandering possession rather cheaply.

As the half progressed Ecuador began take control of the match and created their first decent chance on goal in the 20th minute when Enner Valencia broke behind the Honduras defence, but shot wide of goal with just the keeper to beat.

Six minutes later Brayan Beckeles should have given Honduras the lead when he was afforded a free-header after meeting a corner-kick at the back post, but under no pressure his six-yard effort went wide.

Just after the hour mark a bit fortune  saw Honduras take the lead when a long ball form the back ricocheted off the back of an Ecuador defender and into the path Carlo Costly which saw him through on goal – the striker made no mistake with a powerful 18-yard finish into the bottom corner, 1-0.

It was Honduras’ first goal in international play for 517 minutes, but their joy was short-lived.

Two minutes after going behind Ecuador drew level when a Juan Paredes long range shot deflected into the path of Enner Valencia a couple-yards out and he calmly side-footed the ball home, 1-1.

That goal was Enner Valencia’s sixth goal in as many international matches.

Honduras thought they had taken the lead in injury time of the first half when Costly met a cross from the right and saw his header strike the crossbar before finding its way into the back of the net off Jerry Bengston, but the goal was disallowed for handball.

The second half saw Ecuador with more of the ball and they made their pressure tell in the 65th minute when Enner Valencia headed home a corner-kick for his second goal of the night, 2-1.

Honduras tried to fight their way back into the match and Maynor Figueroa came closest to levelling matters in the 85th minute when his thunderous 30-yards shot shaved the top of the crossbar.

The game ended 2-1 in favour of Ecuador who picked up their first win of the 2014 FIFA World Cup.

Honduras, Ecuador look to bounce back

Honduras and Ecuador will both be looking to bounce back from defeats in their opening 2014 FIFA World Cup Group E matches when they meet in Curitiba in the late kick-off on Friday.

Honduras suffered an emphatic 3-0 crushing at the hands of France in Porto Alegre, with midfielder Wilson Palacios sent off after picking up two needless yellow cards.

The reckless tackling of Palacios encapsulated Honduras’ overly-aggressive approach to the game, with France coach Didier Deschamps happy that his team escaped the game with no major injuries or having any of his players provoked.

However, Honduras coach Luis Fernando Suarez was adamant that his team did not take their belligerent approach too far: “I don't think we crossed the line. Of course we have our own style, a strong and intense style, but we always respect the laws of the game and if we don't then the referee will take a decision,” he said.

"In competitive games it is the first time we have had a red card. We didn't have any during the qualifiers. I don't like to complain because it is not on my nature, but there have been many comments that might have had an influence on the referee.”

Ecuador could at least take pride from their performance in a 2-1 loss to Switzerland in Brasilia, though conceding an injury-time goal to succumb to defeat was a bitter pill to swallow.

Coach Reinaldo Rueda felt his team got carried away with the prospect of trying to score a late winner themselves and were ruthlessly punished on the counter attack by the European side.

"We lost our organisation, which has been one of our characteristics, at the end of the match, we were somewhat betrayed by our emotion," Rueda told reporters.

"This provoked the goal which took the draw away from us. I believe a moment of naivety costs us the match."

Rueda was satisfied with Ecuador’s performance but now has to pick up his players quickly ahead of their match against Honduras.

"It was an intense game and I think it was very even, both sides moved the ball around well," said Rueda, who coached Honduras when they drew 0-0 with Switzerland at the 2010 World Cup.

"Football is like that, the result wasn't really what we deserved. We now have to get over this defeat and work on our morale."

The teams have met on 13 previous occasions, though this will be the first in a major tournament. Ecuador have three wins compared to two for Honduras, with no less than eight matches having ended in a draw.