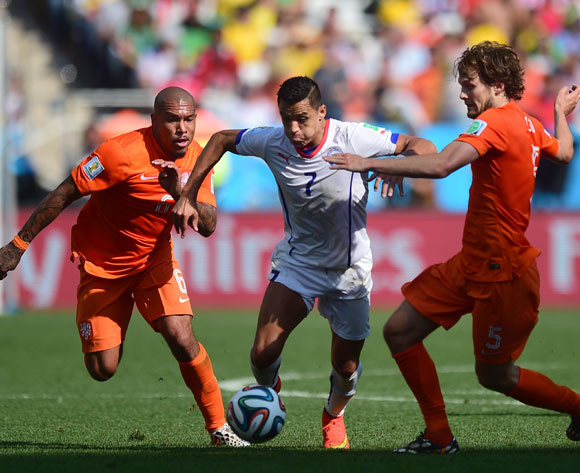 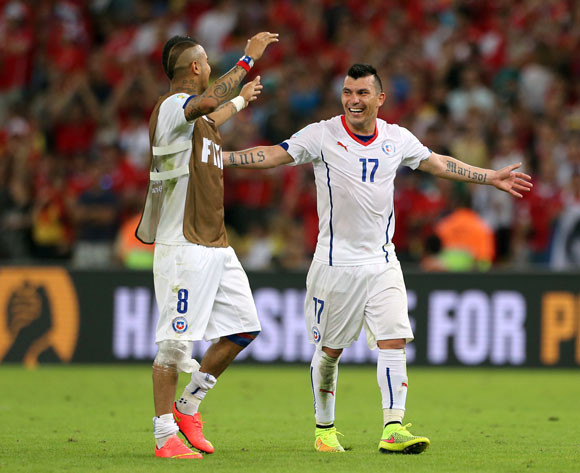 Welcome to the live play-by-play for the 2014 FIFA World Cup Brazil match between Netherlands and Chile at Arena de Sao Paulo.

1' The match is underway!
24' Francisco Silva (Chile) is cautioned.

46' The second half is underway
63' Daley Blind (Netherlands) is cautioned.

Welcome to the live play-by-play for the 2014 FIFA World Cup Brazil match between Netherlands and Chile at Arena de Sao Paulo.

Two second half goals were enough to give in-form Netherlands a 2-0 win over Chile as they topped Group B at the ongoing 2014 FIFA World Cup in Brazil.

The Dutch, who stopped Spain 4-0 and beat Australia 3-2, made sure they kept their one hundred per cent unbeaten record  intact going into the knockout stage.

After dominating the first half, Holland playing minus the suspended skipper  Robin van Persie , returned strongly to run rings around Chile.

Two minutes after replacing Wesley Sneijder, Leroy Fer put Netherlands ahead with a header from the centre of the box to the bottom right corner.

The South Americans fought back strongly trying to get an equalizer and witnessed Alexis Sanchez’s right foot shot was saved while Mauricio Isla’s right footed shot from outside the box in the 85th minute was blocked.

And two minutes deep into added time, Arjen Robben made a fast break and turned provider for Memphis Depay to score with a right footed shot from close-range when he sent the ball into the bottom right corner of the net.

Chile, who also qualify for the knockout stage after their wins over Spain and Australia, failed to penetrate the Netherlands defence.

The Netherlands and Chile will battle for the honour of finishing at the top of Group B when they meet in their 2014 FIFA World Cup encounter at the Arena de Sao Paulo on Monday.

Both sides have qualified for the round of 16 but it is the Dutch side who are currently occupying pole position with six points from two matches.

Louis Van Gaal’s men started their campaign with a convincing 5-1 win over defending champions Spain before showing their never-say-die attitude to beat a resilient Australian side 3-2.

Chile have also collected maximum points from their two matches, beating Australia 3-1 and Spain 2-0, and will need to beat the Netherlands in order to leapfrog them into first place.

Dutch skipper Robin van Persie will miss the game through suspension but he says he is confident that his side has enough cover, including the experienced Arjen Robben, who has also scored three goals so far.

"The boys for the front positions train fantastically,” said Van Persie. “We have a lot of good players."

Regarding Chile, the Manchester United forward believes they will be tough opponents after observing them in action against the outgoing world champions.

"I think that four or five players made Spain's life very hard. So we've got a big task. It will be very hard to at least draw against them."

Meanwhile, Chile midfielder Carlos Carmona says his side are focused on their third group game as they want to maintain their winning momentum ahead of the knockout stage.

"I think the target now is to win the group and after that we will see which team we will face," he said.

"We are proud of what we are doing. Holland are dangerous up front but we are working to face them.

"Based on what we saw, they'll stay in the back, will try to press in the middle and, when they get the ball, will try to get it quickly to their strikers. We have time to work on ways to stop them from doing that."