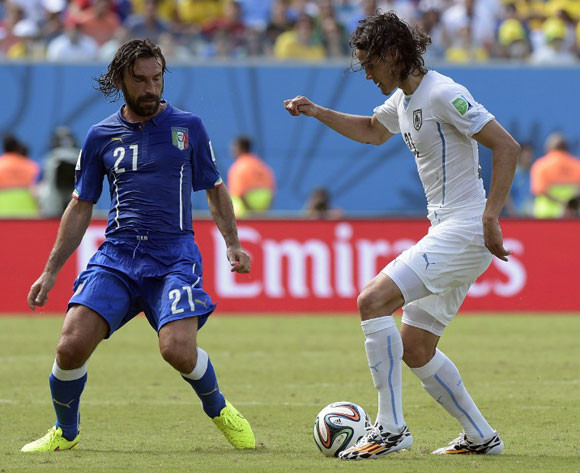 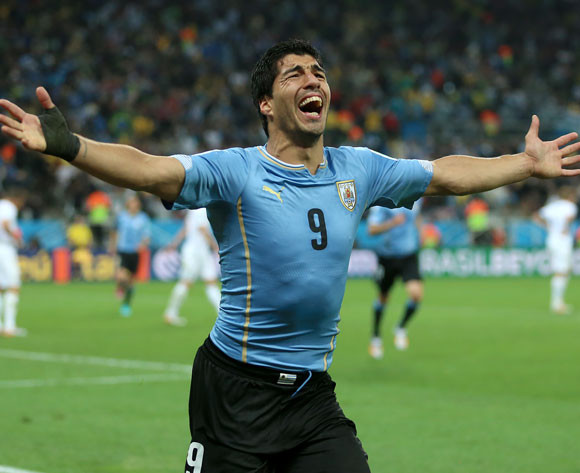 Welcome to the live play-by-play for the 2014 FIFA World Cup Brazil match between Italy and Uruguay at Estadio das Dunas.

1' The match is underway!
22' Mario Balotelli (Italy) is cautioned.

59' Claudio Marchisio (Italy) is sent off.

Welcome to the live play-by-play for the 2014 FIFA World Cup Brazil match between Italy and Uruguay at Estadio das Dunas.

Uruguay Bite Back To Eliminate Italy

A ten-man Italy side were left hard down by when they were eliminated from the World Cup after losing 1-0 to Uruguay in Natal despite Luis Suarez being in the face of controversy again.

Claudio Marchisio was sent off for a studs-up challenge, but the Uruguayan striker got away with murder after being caught on camera biting Giorgio Chiellini.

Cesare Prandelli made several changes in his team, moving to a 3-5-2 formation with Leonardo Bonucci coming in to make the three-man defence.

Daniele De Rossi had to miss out due to a calf injury, and there was a moment of nervousness when Mario Balotelli went down to the ground clutching his knee after just two minutes played.

As expected, the game got off under cagey circumstances and Luis Suarez on the receiving end of two meaty exchanges from Giorgio Chiellini and Andrea Barzagli.

The game was flowing from one end of the field to the other and Leonardo Bonucci did well to nod away Edinson Cavani’s free-header from just inside the box with 15 minutes on the clock.

Balotelli was then booked seven minutes later, ruling him out of the next match for Italy, before seeing Luis Suarez force Gianluigi Buffon to rush off his line and punch away his lingering free-kick.

Uruguay did well to beat away Barzagli’s low drive into the box, before Balotelli whipped a disappointing low drive from 20-yards well wide of the goal.

Buffon pulled off a great double save just after the half hour mark when he beat away Suarez’s ball, before following up on Nicolas Lodeiro’s effort.

Martin Caceres, who tried to catch Buffon off his line by striking the ball from near the half way line, concluded the half with an audacious effort but it was ridiculously wide.

Prandelli took off Balotelli at the restart in place of Marco Parolo, while Maxi Perriera was also introduced in place of Nicolas Lodiero.

Uruguay came close to scoring when Alvaro Gonzalez drilled his effort wide of the far post as they started to pick up the pace.

It went worse Italy as they were reduced to ten men just before the hour mark after Claudio Marchisio went in for studs up challenge on Egidio Arevalo.

Buffon was again at the disposal of Italy to keep them in the game, while Ciro Immobile’s effort was close down by Gimenez.

Suarez got away with murder again when he turned around bit Chiellini’s shoulder ten minutes from time and walked away without a booking.

And if things weren’t bad enough for Italy, they found themselves out a goal down when Diego Godin nodded in a corner kick to send Uruguay through to the knockout stages.

Italy and Uruguay will have it all to play for when they meet in Group D’s final match at the Estadio das Dunas in Natal on Tuesdayevening vying for a spot in the Last 16 of the World Cup.

Both outfit’s fates are dangling by a thread when they line up against each other under the sweltering heat of the Amazon city.

Italy were expected to qualify for the knockout stages last Friday evening, but they were dealt a massive blow when Costa Rica threw a second spanner in the works to split open the group.

Following a convincing display over England, the Azzurri were confident of their abilities in coming up a Los Ticos side, who despite having beaten Uruguay in the group opener, were unmatched quality wise to Italy.

But Cesare Prandelli’s men learnt their lesson quickly as the pace and passion of the Costa Ricans saw them better the four-times World Cup winners on many levels, seeing Bryan Ruiz net the only goal of the game to win 1-0.

Italy had failed to win a second group match since France 1998 and their innings was only extended in a disappointing display that saw even the ever-green Andrea Pirlo fail to inspire.

“History teaches us the higher the stakes, the more we deliver. Mind you, it would be a little masochistic and risky if we only performed when we were drowning...” confessed Gianluigi Buffon who recover in time to face Costa Rica.

“This is my 10th major tournament and only once, in last year’s Confederations Cup, where we already qualified before the third game.

“Uruguay are a side to be feared and there is an echo effect from the recent games. We are coming off a deserved defeat to Costa Rica, while Uruguay are fresh from beating England.”

Costa Rica’s 3-1 win over Uruguay means Italy can get away with a 1-1 draw against Oscar Tabarez’s side to see them through to the next round, but the Italians know full well they can’t rely on that.

Los Charrúas showed a great amount of improvement from their defeat on Match day one to bounce back and end England’s hopes with their 2-1 triumph in Sao Paulo.

Luis Suarez’s return to the team brought an inevitable change of fortune as he helped inspire his nation to their first victory of the campaign all while handing the Three Lions their second loss to eliminate them from the tournament.

The three times World Cup winners have the right amount of quality to see them defeat Prandelli’s side, and Juventus defender Martin Caceres is hoping to use his knowledge of the Italian game to his nation’s advantage.

“I think Coach Tabarez will ask me for information about Italy and Juventus, especially my club teammates,” confessed Caceres.

“I don’t expect Italy to put 10 men behind the ball, as that is not their style. It suits us, as Luis Suarez and Edinson Cavani become deadly with a little space. We’ll play on the counter-attack.

“Uruguayans tend to give their best in difficult situations, as we already proved against England,” continued the centre-back.

“Italy’s defeat to Costa Rica surprised us all. It would’ve been better for us if the Azzurri had won. That way a draw was enough for both teams.”