Germany's Thomas Muller celebrates his goal against the USA 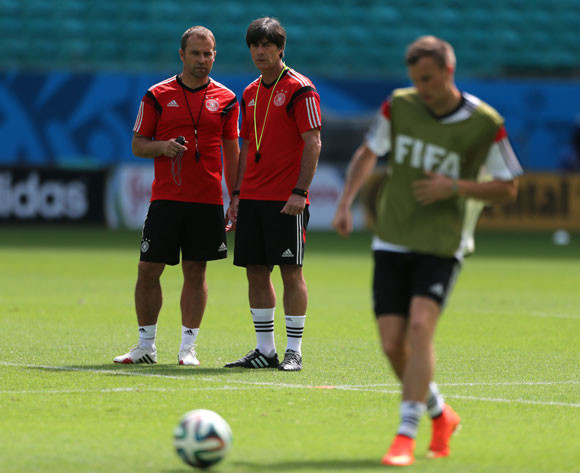 Welcome to the live play-by-play for the 2014 FIFA World Cup Brazil match between USA and Germany at Arena Pernambuco.

1' The match is underway!
11' Benedikt Howedes (Germany) is cautioned.

Welcome to the live play-by-play for the 2014 FIFA World Cup Brazil match between USA and Germany at Arena Pernambuco.

Thomas Muller took his tally to four goals with a 55th minute goal for Germany as they beat USA in a Group G game at the on-going 2014 FIFA World Cup in Brazil.#

The Bayern Munich attacking midfielder’s right footed shot from outside the box settled at the bottom right corner following a corner. The goal came after the Germany Coach Joachim Low had brought on the fresh legs of veteran Miroslav Klose for Lukas Podolski.

The Three times World Cup winners Germany started on a high as the USA team played 10 men behind the ball most of the times. A couple of impressive stops by Tim Howard and clearances from Omar Gonzalez prevented any goals from Germany, though.

Germany’s leading scorer at the tournament Muller also had his shot saved by Howard, while Graham Zusi failed to find the target for the USA. The first half ended with Omar González (USA) and Benedikt Höwedes (Germany) getting booked for bad fouls.

But after recess the Germany team returned strongly as they went all out to look for goals. After 9 minutes Per Mertesacker’s (Germany) header from the centre of the box is saved off a Mesut Özil cross. But moments after Muller made sure Germany picks maximum points with a well taken strike.

With Germany creating many scoring opportunities, the USA team brought Alejandro Bedoya to replace Brad Davis and DeAndre Yedlin for Graham Zusi. Mario Götze also replaced Bastian Schweinsteiger for Germany. Low made two more substitutions, but to no avail to get more goals.

Despite the loss, USA also qualified for the next round after Portugal beat Ghana. Although USA and Portugal finished with four points each, the USA have a better goal difference. Germany will now play the second placed team in Group H, while USA play the first placed of the same Group in the last 16.

Germany vs USA: The clash of familiar foes

Familiar foes will clash when Germany and the United States of the America  lock horns in an eagerly anticipated 2014 World Cup Group G fixture at the Arena Pernambuco in Recife on Thursday.

USA head coach Jurgen Klinsmann, who is a German football legend, has this week claimed that he is eager on guiding the Stars and Stripes to a famous win over the Germans.

The States connection with the European country doesn't end at Klinsmann though, with five players on the US squad having spent most of their lives in Germany.

Klinsmann represented Germany at 1990 World Cup campaign which the Germans went on to win, and coached the 2006 German World Cup team on home soil.

“It’s very special, it’s something that doesn’t happen every year and probably not anymore in the lifetime, so you try to enjoy this moment,” Klinsmann said Tuesday. “I’m looking forward to seeing all of them. The staff is pretty much the same as I left it, when I stepped out in 2006. It’s going to be emotional, there’s no doubt about it. But I also will enjoy it.”

After conceding a stoppage time equalizer in their 2-2 draw with Portugal on Sunday, the  Americans have been left in a situation where a draw against Germany in Recife on Thursday's final group game would clinch qualification for both sides, but Klinsmann has explained that they will go full out for the win.

"The U.S. knows only how to give everything it has in every game. We have that fighting spirit and that energy and determination to do well in every single game. Our goal is to beat Germany," the former Totteham Hotspur striker added

"I don't think we are made for draws really, unless it happens like Sunday [against Portugal] with two late goals in the last seconds. Both teams go into this game and want to win the group. We want to go at Germany and get three points and be in the driver's seat for the round of 16. I am sure we will see a very exciting match in Recife. I think coming now is a lot of respect from our opponents."

The current German head coach Joachim Löw, who is in fact Klinsmann's protege has also ruled out a stalemate.

"When you want to draw, it never works. It's impossible. Always, the aim is to win the match."


Germany were held to a 2-2 draw by Ghana in their second match.The last meeting between the two sides in June 2013, ended in a highly entertaining 4-3 win for the States.
Report