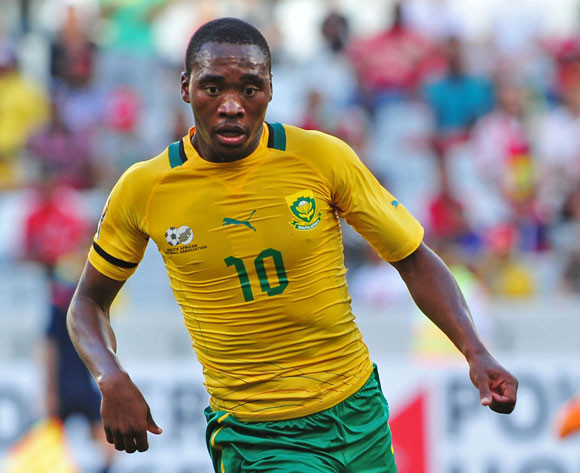 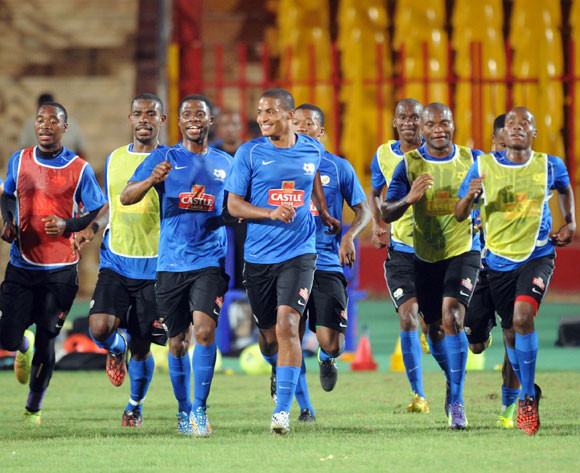 South African players during The Bafana Training session in Sudan

Welcome to the live play-by-play for the 2015 Africa Cup of Nations Qualifiers match between Sudan and South Africa at .

1' The match is underway!
3' Meyiwa makes a good catch from a right-flank cross.
4' Matlaba with a long-range shot for Bafana, but it's high and wide.
6' Mathoho heads clear from a Sudan corner kick.

7' A second corner finds Balla unmarked but he puts his header over the crossbar!

9' Ndulula's tame cross is dropped by the Sudan 'keeper, but Rantie cannot turn the loose ball home from close range! A big let-off for the hosts!
13' Rantie with a long-range shot, but a Sudan defender gets his body in the way to block.
15' Furman almost breaks through on the edge of the box, but a last-ditch tackle stops him.
16' Bisha with a free header in the box, but Meyiwa is on hand to make a good save. Now a long range shot from the same player... tipped over by Meyiwa!
19' A quick break in play, with the players taking on water.
20' And boy do they need it: it's absolute steamer of an evening.
23' Midway through the first half, still goalless. Bafana will be relatively happy with their work so far.
27' Meyiwa almost caught out by a quickly-taken free kick, but he tips the ball over the bar for a corner.
28' The set piece is wasted by Sudan, who miss the chance to test the visitors' defence.

33' Rantie shoots with the left, great save from Mahjoub! He tips the shot away for a corner!
34' Mahjoub misjudges the cross from the corner... he's a bit dodgy when balls are played into his area.

37' Balla with an acrobatic effort, comfortably saved by Meyiwa.
40' Meyiwa with a solid piece of handling from a corner kick. So far, so good from the stand-in Bafana captain.

42' A dangerous ball flashes across the SA box, but to no avail for the home side.
45' There will be one minute of added time.
45 + 1' The referee brings the first half to an end.

46' The second half is underway
49' Furman is slow to his feet after a rough challenge. It's a tough game out there...
51' Meyiwa with a solid catch from a corner kick. He remains rock-solid.

56' Mathoho's header from a corner is cleared off the line, but Vilakazi reacts quickest to score! Sudan 0-1 SA!
60' A chance for Ndulula, but it's hit straight at the 'keeper.
61' Sibusiso Vilakazi (South Africa) scores!

62' A quick-passing build-up on the edge of the box, Vilakazi makes space and cracks the ball into the top corner! Sudan 0-2 SA!
66' Vilakazi tees up Masango, but the winger can't get a clean tough to finish and the chance disappears!
68' South Africa: Oupa Manyisa replaces Mandla Masango

72' This could be a famous win for SA, and a great start for coach Shakes Mashaba...
79' Bongani Ndulula (South Africa) scores!

80' Manyisa skins the right-back, plays a perfect cross and Ndulula scores on debut! Sudan 0-3 SA!
82' This will be the perfect start to the qualifiers for Bafana, a 3-0 away win...
85' Great cross from the right, Tahir with a header... off the upright! Unlucky for the hosts!
88' This game is fizzling out now, Sudan know there is no back from here and Bafana are prepared to just see the match out.
90' There will be four minutes of added time.
90 + 4' The referee blows the whistle for Full Time.

Welcome to the live play-by-play for the 2015 Africa Cup of Nations Qualifiers match between Sudan and South Africa at .

Shakes starts with a big win

Shakes Mashaba’s second tenure in charge of Bafana Bafana got off to a perfect start on Friday evening as South Africa defeated Sudan 3-0 at the Al Merreikh Stadium.

The result sees Bafana Bafana move to the top of the Group A standings in the 2015 Africa Cup of Nations qualifiers, with Nigeria and Congo set to clash on Saturday.

Mashaba opted for an attacking line-up which saw goalkeeper Senzo Meyiwa installed as captain, while Keagan Dolly and Bongani Ndulula made their national team debuts.

Sudan threatened from a couple of early corner kicks and tall defender Balla Jabir should have done better when presented with a free header as early as the seventh minute.

However, the best chance of the first half fell to Tokelo Rantie in the ninth minute. Bongani Ndulula’s cross from the right was dropped by goalkeeper Moez Mahjoub, but Rantie was unable to turn home the loose ball from close range.

Just past the quarter hour mark South Africa needed goalkeeper and captain Senzo Meyiwa to make two fine saves, with the second a particularly notable redirection of a long range shot to clear the crossbar for a corner kick.

On 33 minutes Rantie almost broke the deadlock with a curling left-footed effort that looked destined for the bottom corner, but Mahjoub made a superb diving save.

Rantie was replaced early in the second half by Sibusiso Vilakazi. At the time it seemed a defensive move from coach Shakes Mashaba, but ‘Vila’ vindicated his decision with his first two goals for his country.

The Bidvest Wits no.10 opened the scoring in the 55th minute, poking home from close range after Erick Mathoho’s goal-bound header from a corner kick was cleared off the line by a defender.

Just past the hour mark Vilakazi made it 2-0, cleverly opening up space for a shot with a neat dummy before cracking the ball into the top corner from just inside the box.

On 66 minutes Vilakazi unselfishly spurned the chance for a hat-trick by teeing up Mandla Masango when well-placed, but the Kaizer Chiefs winger was unable to control the ball on the tricky pitch.

With just over 10 minutes to play, substitute Oupa Manyisa created the third goal, getting past the Sudanese right-back before playing a perfect cross for Bongani Ndulula to score from close range on debut.

Mohamed Tahir almost pulled one back for the Falcons of Jediane in the 85th minute, but his powerful header rebounded off the upright with Meyiwa well beaten.

South Africa face a tough challenge away to Sudan on Friday evening as they kick-off Group A of the 2015 Africa Cup of Nations qualifiers.

The teams have never met in a senior official match before despite being founding members of the Confederation of African Football (CAF), making this something of a historic encounter.

The match will also mark Ephraim ‘Shakes’ Mashaba’s first in charge of Bafana Bafana since being appointed the new coach in July.

‘Shakes’ has picked a youthful, inexperienced squad for the match against Sudan and reigning African champions Nigeria, which takes place next midweek.

However, the squad has been hit by a few withdrawals, with the loss of first choice goalkeeper Itumeleng Khune (who was by far and away the most experienced player in the squad) a particularly severe blow.

Exciting attacking midfielder Ayanda Patosi is also ruled out after missing his connection from Belgium. However, Mashaba says he is happy with the group of players.

“I am glad with this group of players I am travelling with. We are going there to fight, make no mistake,” said Mashaba.

However, Sudan will be no pushovers, especially on home soil. The Falcons of Jediane lost 3-1 to Zambia in a warm-up friendly, but coach Mohamed ‘Mazda’ Abdallah insists they are determined to overcome Bafana.

“The 3-1 loss to Zambia in an international friendly has made us even [more] hungry to stop South Africa. The boys are geared up towards that game and will die a little for the country,” said ‘Mazda’.