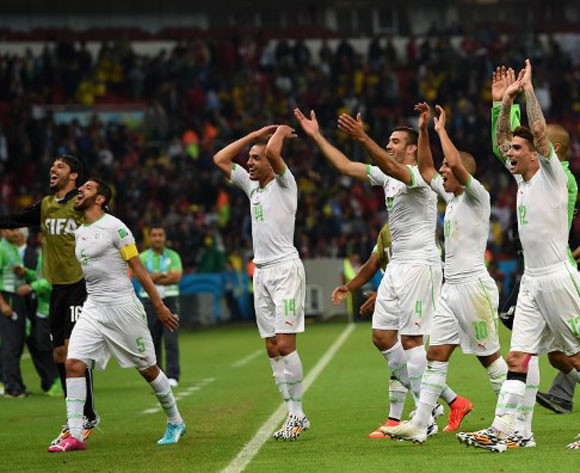 A late goal from Carl Medjani handed Algeria their second win in Group B as the defeated Mali 1-0 in their 2015 Africa Cup of Nations qualifier at the Stade Mustapha Tchaker in Blida on Wednesday night.

Both sides went into the match in high spirits after winning their opening encounters but it was the hosts who were able to secure maximum points to stay on top of the group with six points.

The home side had the early chances with Riyad Mahrez missing a good chance in the 10th minute, while Saphir Taider was denied by the woodwork from a freekick a minute later.

Sofiane Feghouli also failed to hit the target when he was set up by Mahrez in the 32nd minute, while Sambou Yatabaré headed over the crossbar at the other end three minutes later.

The visitors came close to breaking the deadlock in the 61st minute but Mustapha Yatabaré was denied by Rais Mbohli, while Bakary Sako squandered the follow-up shot.

The Eagles were reduced to ten men in the 69th minute when Mamoutou N'Diaye was shown a second yellow card for a foul on Feghouli.

Their indiscipline proved to be more costly in the 83rd minute when a freekick they gave away on the right was swung in by Mahrez for Medjani to head home from the centre of the box.

Algeria will look to continue with their winning ways when they face Malawi twice in October, while the Eagles will be out to redeem themselves against Ethiopia.

Algeria and Mali will renew their rivalry when they clash for a Group B 2015 Africa Cup of Nations qualifier in Blida on Wednesday night.

Algeria come into the match having claimed a fine 2-1 away win over Ethiopia in Addis Ababa on Saturday in their first match under new French coach Christian Gourcuff. Goals from El Arbi Soudani and Yacine Brahimi secured the three points for the Fennec Foxes.

As for Mali, they eased to a 2-0 home win over Mali in Bamako despite playing a third of the match with 10 men following a red card to Mamadou Samassa. Bakary Sako and Cheick Diabate’s second-half goals took the Eagles to an opening victory.

This midweek match represents a chance for either Algeria or Mali to take control of Group B and put themselves in a strong position to end the qualifying phase as one of the top two in their pool, thereby securing a ticket to the AFCON finals in Morocco next year.

In head-to-head terms, the teams have met no less than 16 times in official senior internationals. Algeria have eight wins, Mali seven, and just one match has been drawn. The North Africans have a slight edge on goals scored: 20 to 19.

The teams’ most recent meetings were in the qualifiers for the 2014 World Cup. The Eagles claimed a 2-1 home win in Ouagadougou (in Burkina Faso) in June 2012, while the return match in September the following year in Blida ended 1-0 in favour of the Fennec Foxes, who went on to qualify for the showpiece event in Brazil.

The Foxes boast a 100 percent home record against Mali in qualifiers for both the World Cup and Africa Cup of Nations, winning all four such matches.

Referee Neant Alioum of Cameroon will take charge of the match at the Stade Mustapha Tchaker on Wednesday night.