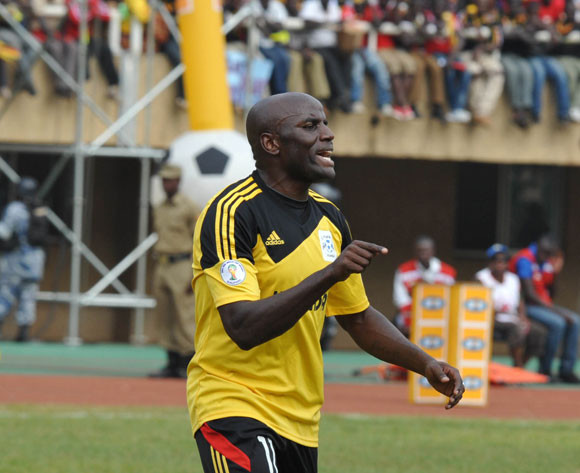 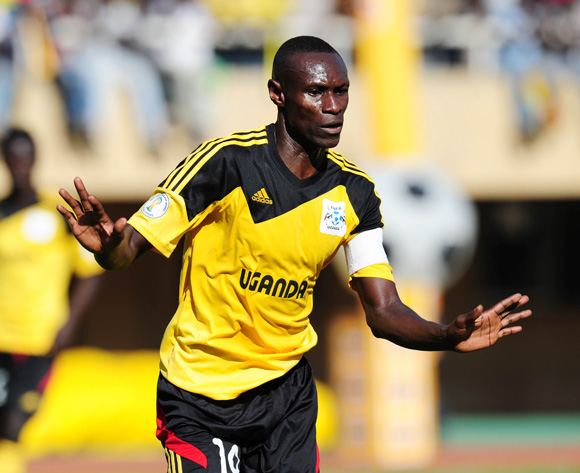 Welcome to the live play-by-play for the 2015 Africa Cup of Nations Qualifiers match between Uganda and Guinea at .

It's a cold evening at the Mandela National Stadium, Namboole as the Uganda Cranes line-up to face Guinea in a Group E tie of the 2015 Afcon qualifier.
Fans are still struggling to find their way into the Stadium. It has been a long while since the Cranes played a competitive match under floodlight at home.
The two teams walk into the pitch. Hosts Uganda are dressed in red jerseys with yellow strips, while Guinea is in their all white jerseys with green and red strips.
1' The match is underway!
5' Five minutes into the game and the score is still Uganda 0 Guinea 0.
5' The teams are yet to settle on the slippery pitch.
6' Corner for Uganda.

21' It's was a cross by defender Godfrey Walusimbi.
24' Massa has become a problem for the Guinea defenders with his speed.
26' Cranes goalkeeper Onyango stops a shot at goal.
30' Hosts Uganda lead 1-0.
30' The Guinea team is now settling and causing problems in the midfield.
31' Good cross in the box by Guinea's Camara Fode, but no one to finish.
35' Uganda survive a Guinea attack.
36' Khalid Aucho's free kick is stopped by Guinea goalkeeper.
36' First corner for Guinea.

36' Cranes goalkeeper Onyango makes a save.
37' Uganda survive again as Soumah Seydoumba is causing problems with his good dribbling skills.
40' Khalid Aucho's fails to finish off a Godfrey Walusimbi cross in front of goal.
41' Massa scores second goal for Uganda.

41' It was a cross by William Luwagga.
43' The Univeristy of Pretoria striker has taken two shots at goal and scored two.
44' 1 minute of added time as Uganda leads 2-0.
45 + 1' The referee brings the first half to an end.

62' Cranes defender Walusimbi just in time to clear a dangerous Guinea raid in the box.
64' Power goes off in the Stadium.
64' It's darkness in the Stadium after a power outage.
64' The lights are getting back on at the Stadium. It will take another 15 minutes for all the lights to be on.
64' Game resumes.
67' Uganda: Brian Majwega replaces Moses Oloya

73' Cranes survive as the defenders are beaten, but the Guinea striker shots over the bar.
75' Guinea are piling pressure.
75' Onayngo saves another Guinea shot at goal.
77' Uganda: Brian Umony replaces Khalid Aucho

Welcome to the live play-by-play for the 2015 Africa Cup of Nations Qualifiers match between Uganda and Guinea at .

Striker Geoffrey Massa netted two first half goals to guide Uganda to a 2-0 win over Guinea in a 2015 Africa Cup of Nations (Afcon) qualifier played at the Mandela National Stadium, Namboole.

Massa put the home side 1-0 up after 21 minutes when he capitalized on a Godfrey Walusimbi cross to finish at close range. The University of Pretoria striker celebrated with his teammates at the corner flag as the fans ran crazy.

Keita Naby and Soumah Seydoumba kept the Cranes defenders busy with their neat play, but still failed to find the back of the next.

On 41 minutes Portugal-based William Luwagga released a clever pass for Massa who made no mistake shooting the ball at the corner past the Guinea goalkeeper Yattara Naby Moussa.

On return the home side defended well to deny Guinea any chance of scoring.

The West Africans stepped up their game and introduced two fresh players, but to no avail as the Cranes goalkeeper stood firm.

Guinea who beat Togo 2-1 last Friday are now third in Group E of the qualifiers with Uganda and Ghana leading with four points apiece.

Ghana, who drew 1-1 with the Cranes last weekend, beat Togo 3-2 away on Wednesday to lead the Group on better goals average.

Uganda Cranes will hope that fans play a big role when they face Guinea on Wednesday in a Group E tie of the 2015 Africa Cup of Nations qualifiers.

“We are praying that the fans come in large numbers and cheer us on because this is a very important game for us,” skipper Andrew Mwesigwa told AfricanFootball.com.

The captain, who played a key role in the Cranes’ hard fought 1-1 draw away to Ghana last Saturday, said they are determined to die a little for the country.

Guinea are top of the table after stopping Emmanuel Adebayor’s Togo 2-1 in the neutral Stadium in Casablanca, Morocco, last Friday.

“We need to make the home advantage count. After that draw in Ghana, we badly need the three points against Guinea,” said Tony Mawejje, who scored against the Black Stars.

The Cranes will welcome back their two pivotal players, Geoffrey Massa and Brian Majwega, who missed the game against Ghana last weekend.

Head coach Milutin ‘Micho’ Sredojevic said they must make the draw in Ghana count with a win at the Mandela National Stadium, Namboole.

“I respect the Guinea team because they are good with an experienced coach. But we are more hungry and have to fight to get maximum points,” said Sredojevic.

His counterpart Michel Dussuyer said they are in Kampala to win and not just for a tour.

“We know Uganda are a very dangerous team at home, but we are prepared for them,” said Dussuyer.

The visitors will miss the services of Idrissa Sylla, who scored one of the goals against Togo but got sent off later.

Dussuyer will hope that the likes of Soumah Seydouba and Aboubacar Demba Camara can lead the search for goals.