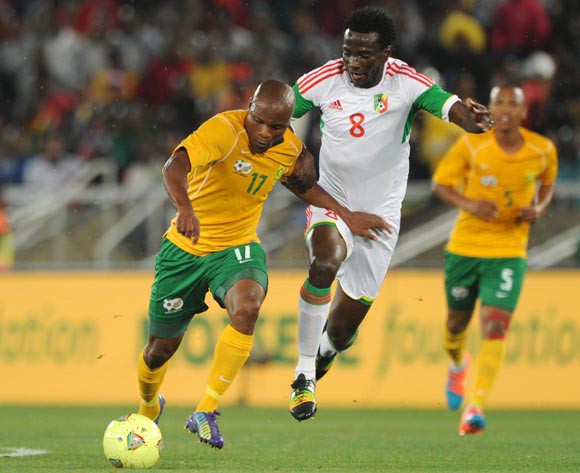 Tokelo Rantie of South Africa battles with Ndinga Delvin of Congo during the 2015 African Cup of Nations Qualifier match between South Africa and Congo, at Peter Mokaba Stadium on 14 October 2014 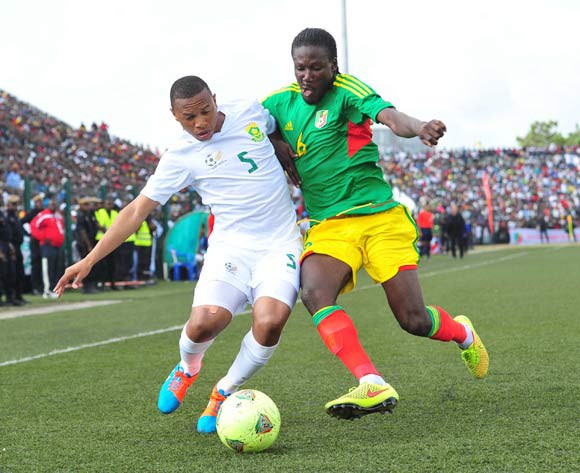 Welcome to the live play-by-play for the 2015 Africa Cup of Nations Qualifiers match between South Africa and Congo at Peter Mokaba Stadium.

It's a simple equation for South Africa: win and they will qualify for next year's Africa Cup of Nations.
To do so with two games to spare would represent a magnificent achievement for coach Shakes Mashaba and his charges.
However, Congo have their own ambitions and could prove a more dangerous force away from home, with coach Claude Le Roy very keen to make up for the 2-0 loss they suffered against Bafana Bafana at the weekend.
The referee for tonight's match is Badara Diatta from Senegal.
News from the other Group A game today, with Nigeria defeating Sudan 3-1 in Abuja to revive their hopes of qualifying for Morocco 2015.
We've had the national anthems and we are ready for the match to kick-off!
1' The match is underway!
2' SA wear gold and green, Congo are in a change strip of all white.
4' Masango penalised for a high foot as South Africa look to get moving in attack.
5' Masango looks for a quick one-two with Rantie, but the move falls apart on the edge of Congo's penalty area.
7' There's been a few aimless long balls from South Africa, who are ceding possession far too easily early on here...
9' Rantie skins his marker down the right, gets to the by-line and looks for a low cross to Ndulula, but a defender clears for Congo.
11' Great vocal support for Bafana Bafana from the Polokwane crowd.
13' Hlatshwayo looks to put Rantie in behind the defence, but his long ball is overcooked and easily claimed by goalkeeper Massa.
14' Serero wins a free kick in a very useful attacking position for Bafana. Too far out for a direct shot, but a good angle for an in-swinging cross...
15' It's played square for Khumalo, who shoots from long range... high and wide.
18' Corner kick Bafana. Masango with an out-swinger from the right, easily cleared by the Congo defence.

19' Rantie almost dispossesses Massa, who has come way wide off his line, but it ends with a free kick to the visitors.
20' Jali chips a great ball over the top to put Rantie in on goal, but the striker is flagged offside.
23' Moutou arrives at the far post to meet a right-wing cross, but his header is off target.
25' Mathoho with a couple of towering headers in defence. Congo are seeing more of the ball now and playing with greater confidence.
26' Meyiwa with an unconvincing but effective tip away from a corner kick to put the hosts away on a counter attack.

29' It's Congo who look the better team right now, they're passing it around nicely.
31' Past the half hour mark in Polokwane, still goalless between South Africa and Congo.
33' Dore takes a knock to the back of the head from Mathoho, but he's fine to continue.
34' Nganga looks to cross from the left for Congo, but he fails to pick out a teammate.
36' Ndinga heads on target from a corner kick, but Meyiwa makes a great diving save!

37' That's the first notable save either goalkeeper has had to make.
40' Another corner for SA, Masango swings it in... Mathoho wins the header, but it's not a clean one and over for a goal kick.

43' Closing in on half time... it's looking like a stalemate at the break, just as it was on Saturday.
45' There will be one minute of added time.
45 + 1' The referee brings the first half to an end.

46' The second half is underway
48' Moubhibo with a vital interception to prevent Ndulula getting in on goal.
50' Masango gets onto a long ball into the Congo box, but he's way offside.
52' A disappointing final cross from Hlatshwayo, but Bafana Bafana's combination play is improving.
53' Mathoho with an important header to clear Baudry's cross from the right flank.
56' As the rain pours down in Polokwane, it's the visitors from Congo who are handling the conditions better.
58' Sibusiso Khumalo (South Africa) is cautioned.

61' Congo have the ball in the back of the net, but the offside flag is up.
62' Igor Nganga (Congo) is cautioned.

66' Dore gets up to meet a left-wing cross, but his glancing header is wide!
67' South Africa: Oupa Manyisa replaces Thulani Serero

68' Snap shot from Manyisa with his first touch, but it's over the crossbar.
71' Less than 20 minutes left now, this is looking like another home stalemate for SA.
74' Nganga is really battling for Congo, they'll have to replace him.
76' Rantie tries to go on a solo run through the Congo defence, but is easily crowded out.
77' Congo: Jusly Gitel Boukama Kaya replaces Francis N'Ganga

77' Rantie with a half chance, now it's Masango who shoots low and hard... wide of the goalkeeper's left-hand post!
80' South Africa: Sibusiso Vilakazi replaces Tokelo Rantie

82' Great surge forward from Jali, Erasmus shoots left-footed from just inside the box... wide of the near post!
84' Just over five minutes left now, it's looking like a draw... which would probably be a fair result given the balance of play.
87' Cesaire Gandze (Congo) is cautioned.

88' Masango has the ball in the back of the net, but the offside flag is up - no goal.
90' There will be four minutes of added time.
90 + 2' Furman gets up gingerly after suffering a knock to the back, but he's fine to finish the match.
90 + 5' The referee blows the whistle for Full Time.

It's done and dusted at a sodden Peter Mokaba Stadium. It ends goalless, a fair result and both teams remain on course to qualify for Morocco 2015.

Welcome to the live play-by-play for the 2015 Africa Cup of Nations Qualifiers match between South Africa and Congo at Peter Mokaba Stadium.

A plucky Congo outfit held Bafana Bafana to a goalless draw in a 2015 Africa of Nations qualifier at the Peter Mokaba Stadium on Wednesday evening.

South Africa knew a win would book their place in the finals next year, but Bafana Bafana were ultimately held to a goalless draw by the 'Red Devils'.

South Africa's preparations were slightly disrupted heading into the game, with Sibusiso Khumalo called into the starting XI after Thabo Matlaba failed a late fitness test on Wednesday morning.

The first shot in anger fell to Khumalo, who shot high and wide in the 15th minute, with both goalkeepers virtually unchallenged in the opening exchanges.

Mandla Masango laid a a free-kick short to the SuperSport United fullback, who skipped past one defender before blazing his left-footed effort high and wide.

Congo were at their best from set-pieces and it was from a corner in the 36th that Senzo Meyiwa was called into action for the first time.

Midfielder Delvin Ndinga rose highest and looked sure to score, but the Bafana Bafana captain made a superb diving save to deny Congo the lead.

Thunder and lighting arrived in the final minutes of the second-half, with it came a stale passage of play with the half ultimately ending without a goal.

The rain persisted in the second-half and it seemed as if Congo had adapted better to the wet conditions in Polokwane, as it was they who looked the more menacing in attack.

Fode Dore looked to have opened the scoring for the visitors just after the hour mark when he stabbed the ball in from close range, but the assistant referee's flag was raised for offside.

Dore then failed to make Bafana pay for poor marking in the 66th minute, glancing his header wide from close range.

The hosts were finding it difficult to break down the 'Red Devils', but went close to finding the back of the net via Mandla Masango, whose grass-cutter went inches wide of Massa's left hand post.

Shakes Mashaba had used up his subs with 10 minutes remaining, Sibusiso Vilakazi, Kermit Erasmus and Oupa Manyisa were all introduces as the hosts searched for the killer blow.

Masango finally had the ball in the back of the net for the hosts with two minutes to play, but celebrations were yet again cut short as the assistant referee's flag was once again elevated, offside.

Bafana remain top of Group A with eight points while Congo are on seven points after four rounds of fixtures.

South Africa next face Sudan before traveling to Calabar to take on defending AFCON champions Nigeria on November 19.

South Africa will look to take another massive step toward qualifying for the 2015 Africa Cup of Nations when they host Republic of Congo for a Group A return match in Polokwane on Wednesday evening. Kick-off at the Peter Mokaba Stadium will be at 20:05 CAT.

Bafana Bafana moved to the top of the standings on Saturday when they claimed a 2-0 away win over the Congolese. Bongani Ndulula and Tokelo Rantie netted second-half goals as the national team racked up another impressive win on the road under new coach Shakes Mashaba.

The result has put South Africa very much in control of their own destiny as far as Morocco 2015 is concerned, but Mashaba has warned against complacency with only half of the qualifying phase completed.

“We are not going to change much for the return leg. We will approach them with the same strategy and ensure we don’t concede early on,” said Mashaba.

“Also we need to guard against complacency. Playing at home is also not a luxury anymore as the players become more under pressure from the fans and end up making mistakes – no freedom of expression.

“But I believe it’s a plus to us having played three tough games without conceding. It is another way to show that the team is working together.”

As for Congo, they remain second on the log on six points (one behind South Africa) and will be eager to claim revenge after their disappointing showing in Pointe-Noire at the weekend.

The ‘Red Devils’ are still very much in the frame to qualify for Morocco 2015 and coach Claude Leroy is a canny tactician who will have learned a lot from the defeat his team suffered.

The Central Africans certainly have the edge on Bafana Bafana when it comes to size and physicality, though that will count for less on the natural pitch at the Peter Mokaba Stadium compared to the artificial turf the teams played on in their first clash.

Senegalese referee Badara Diatta will take charge of the match in Limpopo on Wednesday night. The other Group A match sees Nigeria host Sudan in Abuja earlier in the day.