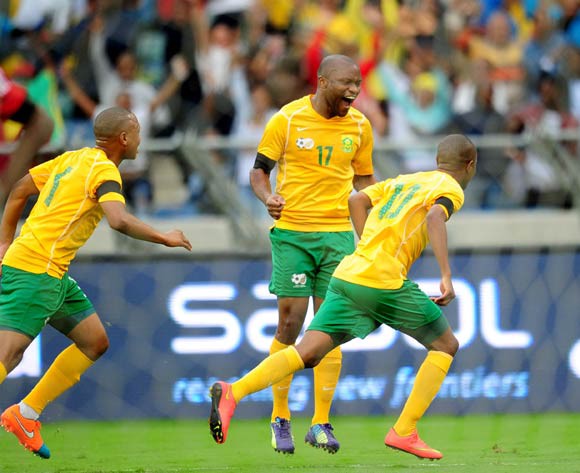 Thulani Serero of South Africa celebrates during the 2014 AFCON Qualifier football match between South Africa and Sudan at the Moses Mabhida Stadium in Durban , Kwa-Zulu Natal on the 15th of November 2014 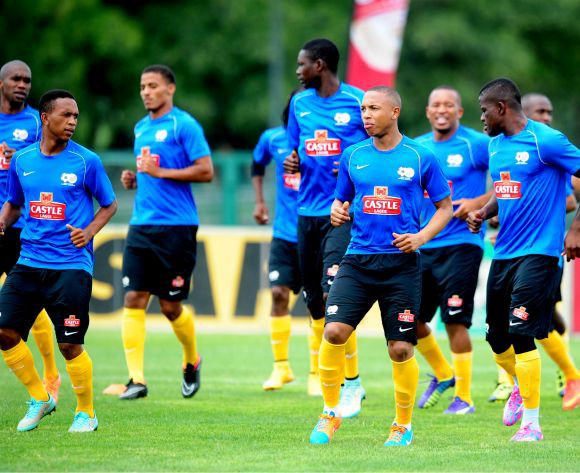 Welcome to the live play-by-play for the 2015 Africa Cup of Nations Qualifiers match between South Africa and Sudan at Moses Mabhida Stadium.

1' The match is underway!
3' Patient start to the game by the home side as they slowly build from the back. Rantie bursts forward and is finally stopped at the third time of asking
8' Furman has firmly established himself as a crowd favourite and has been his usual self up to now, breaking down Sudan's attacking movements
36' Khumalo takes a shot but its a save.
37' Nizar Hamid (Sudan) is cautioned.

46' The second half is underway
52' South Africa are pushing for a second goal.
53' Tokelo Rantie (South Africa) scores!

53' Thulani Serero did the assist there.
57' Yellow card given to the Sudan player
57' Rivaldo Coetzee (South Africa) is cautioned.

Welcome to the live play-by-play for the 2015 Africa Cup of Nations Qualifiers match between South Africa and Sudan at Moses Mabhida Stadium.

South Africa have successfully booked their place in the 2015 African Cup of Nations following a 2-1 win over Sudan at the Moses Mabhida Stadium in Durban on Saturday.

Goals from CAF player of the year nominee Thulani Serero and Tokelo Rantie secured Bafana Bafana's place among the participants in next year’s continental completion which will be hosted by Equatorial Guinea.

Salah Ibrahim scored what proved to be a mere consolation for the visitors.

Shakes Mashaba made three changes to the side that were held to a goalless draw by Congo with Darren Keet filling the sticks in place of the late Senzo Meyiwa while Anele Ngcongca and Oupa Manyisa returned to the starting XI.

Mohamed Abdallah meanwhile made two changes to his starting XI with Kareka and Nazar Hamid recalled to what was an attacking line-up.

Following a slow start to the encounter, both teams started to create chances with South Africa lucky not to be a goal down as Nazar Nassir broke through on goal with 30 minutes on the clock.

The Al Hilal midfielder looked certain to score, but Sibusiso Khumalo caught up with him and produced a superb sliding tackle just as he was about to take a shot at goal.

Bafana Bafana though were finding space down the flanks and exploited the left wing as Serero opened the scoring in the 38th minute.

Andile Jali unleased Rantie who picked out the Ajax Amsterdam midfielder who produced a neat finish to send the home fans into ecstasy, 1-0.

The goal sparked a period of domination for the hosts who went close through Serero and then Rantie after the break, before the Bournemouth man finally found his goal in the 53rd minute.

Serero played the ball to the pacey forward who tore the Sudan defence to pieces before hitting home, 2-0.

South Africa continued to dominate, but the Falcons of Jediane scored next through Salah Ibrahim in the 77th minute.

A free-kick found its way to the El Hilal forward who beat Keet from close range.

Sudan surged forward in the final exchanges, but Bafana Bafana held on to record a hard-fought victory.

The win means South Africa have successfully qualified for their first international tournament by means of a qualifying campaign, since the 2008 African Cup of Nations in Ghana.

Bafana one win away from qualification

Bafana Bafana will be eager to book their place in next year’s Africa Cup of Nations with one game to spare, by beating Sudan at the Moses Mabhida Stadium in Durban on Saturday afternoon.

South Africa squandered a chance to book their place in the showpiece event last month, but will now have another bite at the cherry, knowing a win over Sudan will see them through to next year’s event and make their trip to Nigeria for the final round of 2015 African Cup of Nations qualifiers stress free.

Head coach Shakes Mashaba has reiterated that his side are eager on getting the job done this weekend, ahead of their trip to Uyo to take on the defending AFCON champions.

“We don’t prioritise any of the games …we take them all equally,” said Mashaba.

“It is going to be more than the three points at stake. However, I will be happy if we sum up this by beating Sudan, which will make our life easy when we go to Nigeria.”

South Africa will also be eager to honour the late Senzo Meyiwa in his hometown, three weeks after he was shot and killed in Vosloorus.

Meyiwa, who was Bafana Bafana and Orlando Pirates captain at the time of his untimely passing, helped South Africa to the brink of qualification, keeping four clean sheets in succession as South Africa registered two wins and two draws from the first four rounds of qualifiers.

It is still unclear who will fill his void between the sticks, with Brilliant Khuzwayo, Darren Keet and Siyabonga Mpontshane battling to be named in Mashaba’s starting XI for this weekend’s clash.

South Africa kept their spot top of Group A following their goalless draw against Congo last time out, while Sudan fell behind the Super Eagles following their 3-1 defeat to Nigeria after they had shocked the West Africans 1-0 a few days earlier.

Bafana have been brilliant on the road, but have yet to score on home soil, something that will serve as some encouragement for Sudan boss Mohamed Abdallah.

Mashaba will be without Sibusiso Vilakazi and May Mahlangu for this weekend’s encounter. Vilakazi withdrew from the Bafana camp having failed to recover from a toe injury, while Mahlangu failed to pitch, citing fatigue.

Vilakazi scored a brace, while Bongani Ndulula also got his name on the score sheet as South Africa beat the Falcons of Jediane 3-0 in the reverse fixture in Omdurman on September 5.