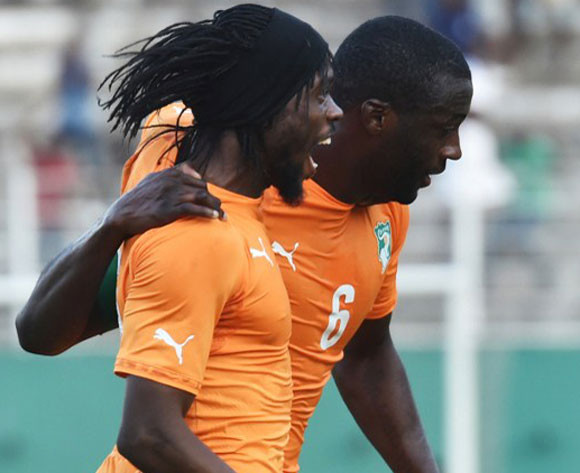 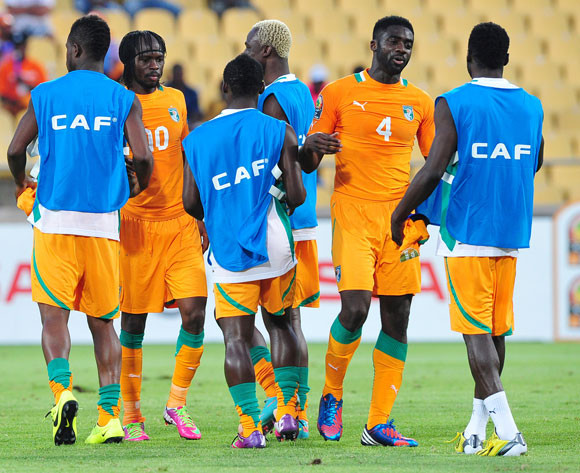 Welcome to the live play-by-play for the 2015 Africa Cup of Nations Qualifiers match between Cote d'Ivoire and Cameroon at Abidjan.

Welcome to live coverage of the 2015 Africa Cup of Nations Group D qualifier between Ivory Coast and Cameroon from Abidjan.
The Indomitable Lions are already assured of a place in next year's finals and will top the group even if they lose today.
The Elephants, meanwhile, need just a point to join Cameroon in qualification. However, if they lose and DR Congo beat Sierra Leone, then they would lose out on second spot in the group on head-to-head results.
The players are making their way out onto the pitch and kick-off is just a few minutes away.
1' The match is underway!
2' Both teams wear their famous colours: Ivory Coast in orange and white, Cameroon in green, red and yellow.
3' Mbia fouls Traore to give away a free kick in a dangerous position. This could be Yaya Toure territory...
4' Toure's shot from the free kick is on target, but goalkeeper Gbohouo makes a good save.
6' Aboubakar looks to turn in the box, but he loses possession and the Elephants spring away on a counter attack.
9' The Elephants on a sustained attack, but Cameroon have numbers back and protect their goalkeeper well.
10' N'Koulou with a great tackle to stop Kalou breaking free on goal.
13' Oyongo clips a ball into the box from a free kick, but it's straight out for a goal kick.
14' It's a pretty slow-paced game so far, but it is being played in the hot afternoon sun in Abidjan.
18' Aurier with a chance on the overlap, but he's quickly closed down by N'Jie.
20' Gervinho caught offside and it's the Elephants who are looking a little more potent in attack right now.
23' Past the midway point of the first half, still 0-0. As it stands, Ivory Coast will qualify alongside Cameroon.
26' Gervinho cuts inside from the left and shoots, but his effort is tame and easily handled by the keeper.
28' Great work from Aboubakar to get to the left by-line in the box, but his attempted pull back is cut out by an orange shirt.
31' Past the half hour mark, the players are very much playing within themselves given the heat.
32' Siene floats in a cross from the left, but Traore is offside.
34' Cameroon: Franck Kom replaces Georges Mandjeck

37' News from the other Group D game is that DRC and Sierra Leone are still locked at 0-0.
38' Nicolas N'Koulou (Cameroon) is cautioned.

38' Yaya Toure tees up Gervinho in the box, but he volleys high over the target!
40' Aboubakar gets a low shot away, but Gbohouo makes a good save.
43' Gervinho crosses, Traore heads towards goal, but it's easy pickings for Ondoua.
45' There will be two minutes of added time.
45 + 1' Aboubacar shoots low on goal, good save from Gbohouo! N'Jie picks up the rebound but can't force it home from a tight angle!
45 + 2' The referee brings the first half to an end.

50' A couple of chances for Cameroon to build pressure from set-pieces, but their delivery has been poor on both occasions.
53' The Elephants have Kalou down injured after a challenge from Kom... they'll hope he is able to run off that knock.
56' Still this match is played at a pedestrian pace. Though, as it stands, both sides will qualify...
57' Stephane Mbia (Cameroon) is sent off.

58' Mbia is adjudged to have denied Gervinho a clear scoring chance and he has been sent off! Cameroon down to 10 men.
60' Yaya Toure shoots on goal from a free kick and Aboubakar heads off his own goal line!
64' Bony gives away a free kick for an aerial challenge on the goalkeeper, who may become a very busy man for the rest of the match...
66' Cameroon: Franck Etoundi replaces Clinton N'Jie

67' DRC are reportedly 2-1 up against Sierra Leone in the other Group D match.
70' Gervinho with a clear scoring chance from close range after some great footwork, but Ondoua makes a great block to keep it 0-0!
72' Tiene chips a ball to the far post from a free kick, Aurier gets up to head high over the bar.
75' Fifteen minutes of regulation time left. Ivory Coast would love a goal to settle their nerves, especially with news that DRC are ahead in the other game.
79' But as long as the Elephants don't let in a goal at the other end against 10-man Cameroon, they will qualify for the 2015 AFCON.
84' Cameroon with a rare attack, but it comes to nothing. Just over five minutes of regulation time left...
87' It could be a tense few minutes for Ivory Coast... any mistake in defence could cost them a place in next year's AFCON.
90' Gbohouo gets some rare action in the second half, picking up an awkward bobbling shot from Aboubakar.
90 + 1' There will be three minutes of added time.
90 + 2' It's become a case of knocking the ball around for the final minutes... this game will end 0-0 and both teams will qualify.
90 + 3' The referee blows the whistle for Full Time.

It ends 0-0, Cameroon top the group and Ivory Coast join them in qualifying for the 2015 AFCON finals.

Welcome to the live play-by-play for the 2015 Africa Cup of Nations Qualifiers match between Cote d'Ivoire and Cameroon at Abidjan.

Ivory Coast secured qualification for the 2015 Africa Cup of Nations finals after playing to a goalless draw with Cameroon in Abidjan on Wednesday.

The Elephants needed just a point to ensure they finished second in Group D behind the Indomitable Lions and in a match that failed to catch alight, they were able to play out a tame draw that suited both teams.

Ivory Coast had the first shot on goal, with Yaya Toure testing Joseph Fabrice Ondoua direct from a free kick in the fourth minute, but the goalkeeper was able to punch the ball clear.

The pace of the game was noticeably becalmed in the heat and humidity of Abidjan, with the teams generally content to play within themselves in an effort to conserve energy.

The home side created only two further notable chances in the first half: the first saw Serge Aurier threaten on the overlap before being closed down, while Gervinho volleyed over the crossbar from within the penalty area.

Cameroon were dealt a blow when midfielder Georges Mandjeck had to be replaced by Franck Kom due to injury, but in striker Vincent Aboubakar they had a dangerous attacking outlet.

The forward almost opened the scoring late in the first half with a fine low shot that forced a good save from Sylvain Gbohouo, while the rebound fell into the path of Clinton N’Jie, but he couldn’t force the ball home from a tight angle.

Cameroon were reduced to 10 men a few minutes before the hour mark in the second half when captain Stephane Mbia was adjudged to have denied Gervinho a clear scoring opportunity. Television replays suggested it was a harsh decision from the referee.

From the subsequent free kick Yaya Toure almost put Ivory Coast ahead, but his curling shot was headed off his own goal line by Aboubakar, who was brilliantly placed to defend the strike.

With 20 minutes to play Gervinho had another great chance after playing a quick one-two with Salomon Kalou, but the Roma attacker was denied by a brave block from Ondoua.

The dying minutes of the game saw Ivory Coast just knock the ball around like a training session, with an exhausted Cameroon not applying any pressure and clearly happy to play out a goalless stalemate.

Ivory Coast host rivals Cameroon as they wrap up their 2015 CAF Africa Nations Cup Qualifiers on Wednesday afternoon hoping to book a spot in Equatorial Guinea.

Although the Indomitable Lions have already qualified, playing the Elephants is always a tough assignment and both sides will look to register a positive result.

Cameroon will go into this encounter sitting comfortably at the pole position in Group D after beating DR Congo last Saturday. They have amassed 13 points from five matches having won four and drawn one.

The hosts on the other hand are currently sitting at position two with nine points after registering three wins and two losses.

Herve Renard’s charges are in high spirits after demolishing Sierra Leone by 5-1 last Friday, a result that puts them closer to qualifying.

However, the rivalry between these two sides is something that cannot be ignored and the match is set to go either way. Cameroon would like to keep their qualifiers’ record clean without a loss and Ivory Coast must get a victory at all costs.

According to the Elephants’ star winger, Max Gradel, their victory over Sierra Leone means their job is half done and will need to finish it offon Wednesday.

“The victory means that half the job is done. We need to finish it on Wednesday against Cameroon and that’s it, with a lot of patience like we did against Sierra Leone,” said Gradel.

“In the second half we realised that we had to pace ourselves and move forward when we had to. It is what we did and we got the result - we have to repeat the same strategy on Wednesday.”

To the Indomitable Lions skipper, Stephane Mbia, they’re in a reconstruction process with a young team but they remain focused.

“We are in a reconstruction process, the team is very young. The coach (Volker Finke) is busy instilling a new mentality in the squad,” said Mbia.

“There is some discipline, a certain behaviour, and that’s why we are getting results. We are very pleased with the qualification, we are going to remain focused and think about our next game which is very important to us.”