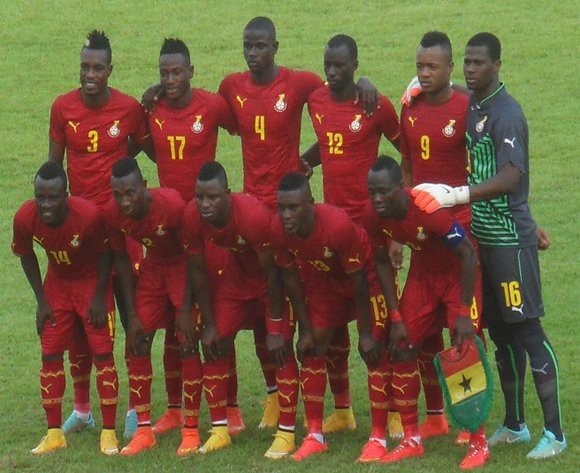 Ghana beat Togo on Wednesday to seal its 2015 AFCON place 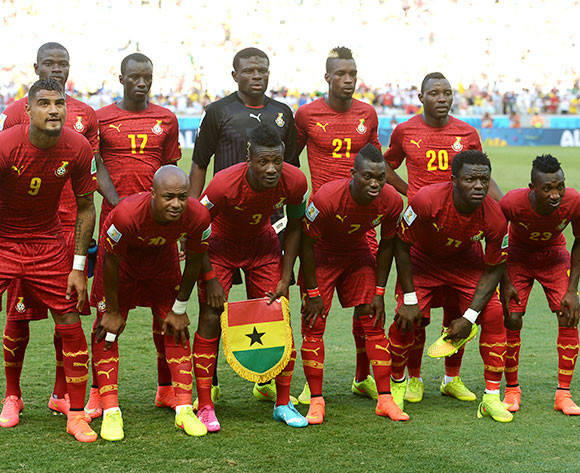 Welcome to the live play-by-play for the 2015 Africa Cup of Nations Qualifiers match between Ghana and Togo at Tamale.

The stadium is still not full and that will be huge disappointment for the Black Stars who had a capacity crowd for the match against Guinea last month.
The both sides are pouring out onto the pitch.. Ghana are in their all red jerseys and Togo are in yellow. National anthems to follow.
Ghana captain Emmanuel Agyemang-Badu and Togo counterpart Emmanuel Adebayor exchanging pennants now.
All players are now displaying a banner that Together We Can Beat Ebola
Hello and welcome to the Tamale Sports Stadium for the final Group E qualifier between Ghana and Togo. The players are in the dressing room now and ready to pour out onto the pitch for the decider.
1' The match is underway with Togo with possession.
1' 1' Ghana win an infringement close to the Togo box after Solomon Asante was fouled
3' Wakaso curls in the free-kick but goalkeeper Agassa was there to clear.
4' Ghana mounting another attack from the right again with Asante thick in affairs but Wakaso's connection to the cross was blocked inside the box.
5' It is still Ghana dictating the pace of the game but no clear scoring opportunities created.
6' Mohammed Rabiu is teed up at the edge of the penalty arc by Jordan Ayew but the Russia-based player shot agonizingly wide.
8' Corner for Ghana..Wakaso effects but John Boye's header aiming at the near post went wide.

10' Nice free-kick whipped in by Mubarak Wakaso from long range..Badu applies a header to it but it went wide.
12' Offside for Togo..Jonathan Ayite has been caught in the trap..Big relief for Ghana. Jonathan Mensah should be thanking his stars after gifting possession.
14' Another nice run by Asante on the right flank and wins a corner.
16' Ghana penetrating the Togo but still not able to find the back of the net. Rahman makes a run inside the box but connects a pass with his weaker left foot.
18' Waris profits from a slip up at the back and was overcrowded by Sadat Ouro Akoriko and Mama Gafar.
20' Togo now rising from the dead and stringing passes together with Adebayor the chief architect.
22' Waris mounts pressure and wins a corner-kick to be effected from the left this time round....
23' Majeed Waris (Ghana) scores! he jumps his marker to head past goalkeeper Kossi Agassa.

23' It was a perfectly weighted cross from Wakaso.
25' Togo resume play and begin to cause troubles but Ghana whether the storm..
26' Mubarak Wakaso (Ghana) scores! strikes from 25 yards to get Ghana's second goal....

26' What a thunderbolt of a shot from the Celtic man.
28' Togo now face a herculean task as they need a win to advance to Equatorial Guinea.
30' Badu breaks lose and has Jordan Ayew waiting inside the box but the latter shoots wide and apologizes to the latter.
34' Togo make a lovely move and threaten Ghana's area but missed a decent scoring opportunity to reduce the deficit.
36' Togo and Adebayor gets to it but he heads wide.

38' Togo have now upped their game but Ghana have been very resolute and repelling every attack.
40' Jordan gets the applauds from the fans after dropping deep to win a ball and get away from three Togo players and gives a pass.
41' Mama Gafar puts in a strong defence and cuts out Jordan Ayew but concedes a throw-in.
43' Another opportunity for Ghana and a lot of passing going on inside the box and Gafar clears away.
45' Referee Gamassa waives a penalty call from Ghana after Solomon Asante is felled inside the box....By the way we are doing a minute of added on time.
45 + 1' The referee brings the first half to an end. Ghana lead Togo 2-0 at the Tamale Sports Stadium and are on the verge of securing qualification to the 2015 Africa Cup of Nations.

46' Welcome back to the Tamale Sports Stadium where the second stanza is about to begin...Ghana are leading Togo 2-0 and set to qualify for the 2015 finals.
46' The second half is underway. Togo are showing promising to claw back.
46' Wakaso sends a long ball back to goalkeeper Braimah to ease pressure on the team.
48' Jonathan Ayite (Togo) scores! he headed in cross after being left unmarked inside the box. Poor marking by Ghana.

48' Togo have scored against the run of play......
49' Ghana attempt to respond and Wakaso whips in a free-kick which was well curled but it was few metros wide.
50' Togo get out of trouble after dealing well with a Ghana incursion inside the box..
52' Free-kick for Ghana as Baba Rahman is fouled close to the touchline.
53' Afful on the run inside the box and has been released by Asante but the Esperance man's cross was too feeble to cause an upset.
53' Emmanuel Adebayor (Togo) is cautioned, has been booked for dissent. The Tottenham star is arguing with referee Gamassa.

55' Nice set piece for Ghana which was taken by Wakaso but Jonathan Mensah was in an offside position.
58' Nice attempt from Ghana but Baba Rahman header was punched out by goalkeeper Agassa....
58' Togo on the break now with Adebayor leading the attack but Wakaso intervenes for a corner-kick to the visitors.

59' Ghana struggle to clear the corner and Jordan Ayew drops deep to ballon the ball from inside the box.
62' Kokou Donou (Togo) is cautioned, he down Wakaso.

62' Ghana free-kick has been delivered from the left flank but the Hawks cleared away.
65' Togo: Floyd Ayite replaces Jonathan Ayite

67' Rahman blocks a cross and it is a throw-in for Togo. It is taken and Togo win a corner-kick but that went over the goal post.
68' Nice through from Jonathan Mensah but Jordan Ayew just could not keep control.
69' Emmanuel Agyemang-Badu (Ghana) scores! Ghana have regained their two-goal lead and captain Agyemang Badu has been credited with the goal.

76' Good pressure from the Hawks to force the Stars defense into an error, but Ghana win a throw deep in their half.
78' Ghana: Christian Atsu replaces Asante Solomon

81' Atsu went on a lovely run into the 18-yard box of Togo and floored but no penalty call
82' Mensah applies the brakes on Attakora to dispossess him and quickly gets in the ball into the area of the Togolese but Jordan was sluggish and Mama Gafar came in with a timely tackle.
84' Wakaso gives away a ball and Togo feeds on it but Braimah saves with his leg for a corner-kick.
86' Wakaso is writhing in pain after Adebayor goes in with a tackle.
87' Waris concedes a free-kick inside Togo's half.
88' Free-kick for Ghana as Jordan Ayew was tackled off the ball.
88' Substitution for Ghana: Jeffrey Schlupp comes on Mubarak Wakaso.
90' Prince Segbefia attempts to score but his effort goes over the goal post.
90 + 2' Ghana respond but Jordan could not connect Rabiu pass from inside the box..Schlupp was released but could not control.
90 + 4' Floyd Ayite receives a nice back flick pass from Adebayor but he skied his effort.
90 + 4' The referee blows the whistle for Full Time. Ghana have beaten Togo 3-1 to secure top spot in Group E and reach the finals of the 2015 Africa Cup of Nations.

Welcome to the live play-by-play for the 2015 Africa Cup of Nations Qualifiers match between Ghana and Togo at Tamale.

A depleted Ghana side put up an impressive showcase to thump Togo 3-1 on Wednesday in Tamale to top Group and secure qualification to the 2015 Africa Cup of Nations finals.

The Black Stars needed a draw pick one of the six remaining slots for grabs on the final match day but approached the match with a winning mentality.

Also, starting TP Mazembe man Solomon Asante ahead of Christian Atsu was a perfect decision as the winger caused problems for Togo on the right flank.

He contributed two crosses within the opening 15 minutes but on all occasion, the centre-back pair of Sadat Ouro Akoriko and Mama Gafar dealt them with.

After coming close on few occasions, Ghana finally broke the deadlock on 23 minutes when Waris headed in a cross from Mubarak Wakaso.

Three minutes later, Wakaso turned corner with a screamer from 35-yards which flew into the net like a missile.

Togo goalkeeper Kossi Agassa was clueless and watched sheepishly as the ball rolled into the roof of his net.

From there, Togo cried to claw back but the young and energetic Black Stars defenders neutralized them.

Ghana went into the break with a two goal lead and knew they had the job almost done but three minutes after recess, Togo struck back.

It was a against the run of play and the Black Stars defender were caught sleeping inside the box.

Jonathan Ayite was totally left unmarked inside the area as he superbly connected Donou Kokou’s cross.

This put pressure on the home side but Togo spearheaded by Emmanuel Adebayor were not clinical enough.

On the 69th minute mark, stand-in captain Emmanuel Agyemang-Badu made a surging run and made his way into the box.

He delivered a cross before hitting the byline and his effort was turned in the net for Ghana to regain its two-goal lead.

Togo did not go down easily as they tried to fight back but lacked the cutting edge.

On two occasions, Prince Segbefia and substitute Floyd Ayite were handed scoring opportunities at the death but could not punish the Black Stars.

Ghana comfortably sealed the win and booked their 20th Africa Cup of Nations berth and will be in Equatorial Guinea.

Ghana have been further weakened ahead of Wednesday’s crucial 2015 Africa Cup of Nations qualifier against Togo following injury to Andre Ayew.

The Olympique Marseille winger, who hurt his thigh during Saturday’s defeat at Uganda, is said to have suffered a minimal grade I tear.

He has been sidelined for close to three weeks.

The Black Stars are ready without skipper Asamoah Gyan and Kwadwo Asamoah who were all injured before the international break for the respective clubs.

Gyan is with the Black Stars squad and could make a cameo if he passes a late fitness test.But the hosts have Jordan Ayew return to the set-up after a serving a one-match ban as a result of yellow card accumulation.

Maxwell Konadu and his troops need a just a draw to reach Equatorial Guinea, where the finals will be played.

Togo look disheveled but are not out of securing one of the two automatic qualification slots in Group E.

The Hawks will need more to dust themselves off the 4-1 home defeat to Guinea last Saturday if they are to progress.

Head coach Tchakala Tchanile could be without key defender Serge Akakpo who suffered a hamstring injury at the weekend.

For the visitors to advance, they only one option and that is to beat Ghana at the Tamale Sports Stadium.