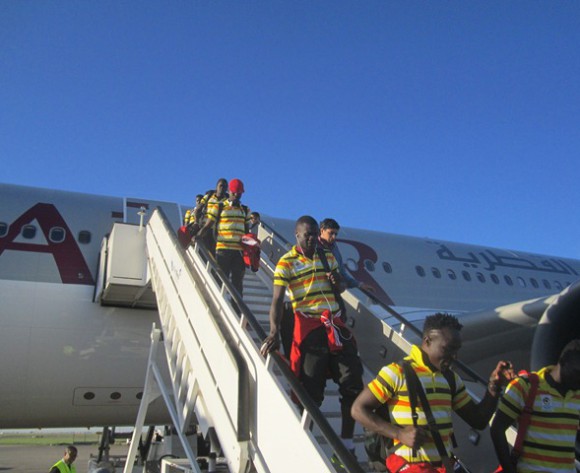 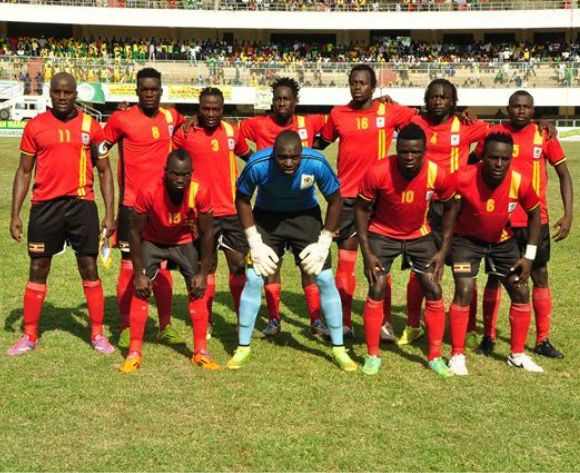 Welcome to the live play-by-play for the 2015 Africa Cup of Nations Qualifiers match between Guinea and Uganda at Casablanca.

1' The match is underway!
2' The game is being played in front of an empty stadium due to it being held in neutral Morocco due to the Ebola virus in Guinea.
3' Idrissa Sylla with the first shot on goal, but his long range effort is way over the bar.
6' Guinea asking the early questions and Uganda doing the defending.
13' Guinea make a good attacking move once more, but the final attempt at goal is wayward and the ball sails way over Dennis Onyango in goal.
16' Brian Majwega on a rare attack for Uganda, but he overcooks his pass.
18' Ibrahima Traore causing lots of problems on the right wing for Guinea. How will Uganda respond to this threat?
22' Soumah wins a free kick for Guinea just outside the Uganda danger area.
23' Ibrahima Traoré (Guinea) scores!

28' Traore's free kick gives Onyango no chance and Guinea fully deserve their lead.
35' Uganda getting forward more now, but they still have not breached the Guinea defence.
41' Guinea holding Uganda back as the game edges close to the half time break. Still 1-0 to Guinea.
45' The referee brings the first half to an end.

45' Guinea lead Uganda 1-0 at half time and are looking good for qualifying. Ibrahima Traore got the goal.
46' The second half is underway
49' Two half chances for Guinea who have come out strong at the start of the second half.
52' Naby Keita hits a long range shot and it is a beauty, but it cannons off the crossbar and Uganda are let off the hook.
57' A rare attacking move by Uganda, but it comes to nothing as they lack rhythm and good decision making.
58' Andrew Mwesigwa (Uganda) is sent off.

68' Geoffrey Massa with a snapshot for Uganda but it flies way over the bar.
72' Uganda: Dan Sserunkuma replaces Farouq Miya

74' Uganda are closed down once again as the Guinea defence stand strong.
78' Very good run by Massa, but he cannot find the target for Uganda.
82' Naby Yattara tries a curling attempt at goal and just goes wide of Onyango.
90' Four minutes remaining of optional time.
90' The referee blows the whistle for Full Time.

90' Guinea go through to the Afcon 2015 finals along with Ghana. Uganda and Togo lose out.

Welcome to the live play-by-play for the 2015 Africa Cup of Nations Qualifiers match between Guinea and Uganda at Casablanca.

A goal in each half was enough to see Guinea beat 10-man Uganda Cranes 2-0 and qualify for the 2015 Africa Cup of Nations.

The Cranes last qualified for Afcon in 1978.

After 23 minutes skipper IbrahimaTraore gave the hosts the lead at the Complexe Muhammed V Stadium in Casablanca, Morocco. He curved the ball past the Ugandan defenders to beat goalkeeper Dennis Onyango.

The Cecafa giants settled after conceding, but failed to penetrate the Guinea defense. The attack of Geoffrey Massa and Farouk Miya failed to get shots on target.

In the second half the visitors returned strongly and run rings around the Ugandan team with clever passing and tactical play.

After 58 minutes Ugandan skipper Andrew Mwesigwa fouled in the box before he was sent to the dressing room for an early shower.
Soumah Seydouba who netted a hat-trick in the 4-1 win against Togo last weekend converted the penalty to make it 2-0.

It was all celebrations for the few Guinea fans in the Stadium after the final whistle.

The last time Uganda appeared in an Africa Cup of Nations (Afcon) event was 37 years ago in Ghana.

They face Guinea in a Group E crucial tie in Casablanca, Morocco on Wednesday and perhaps this could be their chance to break the jinx that has lasted since 1978. Heading into the game, the two teams are tied on seven points each, although Uganda are second because of a better head to head and goal difference.

Milutin ‘Micho’ Sredojevic, the Cranes head coach told AfricanFootball.com in an interview in Casablanca that the chance is in the legs of his players. “They can go all out and play their hearts out and win the game and make Ugandans proud,” he said.

Senior player Tony Mawejje who scored in the 1-1 away draw to Ghana told AfricanFootball.com that he is optimistic this is Uganda’s time to qualify. “Everything has it’s time and I think God has decided we qualify this time,” Mawejje said in Casablanca on Tuesday.

Together with the South African based duo of striker Geoffrey Massa, goalkeeper Denis Onyango and skipper Andrew Mwesigwa, the midfielder is expected to play a big part to see that Ugandan can break this jinx.

It’s a tricky encounter as the winning team will automatically qualify for the event in Equatorial Guinea. Uganda Cranes are second in the Group with seven points, while Guinea have an inferior goal difference and head to head.

The Syli Nationale come to this game well motivated after a 4-1 thrashing of Togo in Lome. Although the coach Michel Dussuyer called up SC Bastia striker François Kamano for the game, the youngster failed to show-up. Seydouba Soumah who netted a brace and Idrissa Sylla who scored one against Togo last weekend together with skipper Ibrahima Traore are expected to play a key role for Guinea.

Right-back Abdoulaye Cissé is suspended against Uganda for accumulation of bookings. The visitors will have defender Godfrey Walusimbi return after serving a suspension, while AS Vita striker Junior Yunus Ssentamu who got injured during the game against Ghana misses the match.