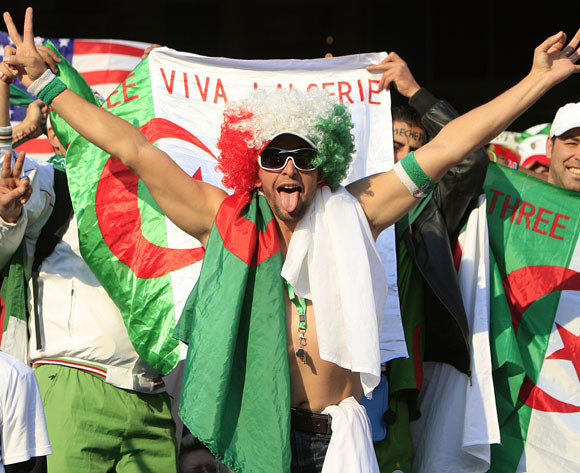 Welcome to the live play-by-play for the 2014 FIFA World Cup Brazil match between Algeria and Russia at Arena da Baixada.

1' The match is underway!
4' Slow start in the game. Both teams having a feel for each other so far
6' Aleksandr Kokorin (Russia) scores!

6' Special goal! Aleksandr Kokorin nods in a great cross to put the Russians in front
11' Algeria still trying to push their way up the field. Russia doing well to defend
13' Feghouli with a great faint and dink into the box for Brahimi. the goalkeeper spills but it gets cleared away
17' The Mexican wave is going around the stadium. Throw in for Russia
19' Kokorin with another head but this time it goes well wide at the back post
22' Akinfeev sends the ball upfield with his goal-kick. The ball ping-longs around as Russia continue to go in search of a second goal
25' The ball is bogged down in the middle of the park. Pace of the game dropping somewhat
26' Chance! Shatov with a great effort from the edge of the D to stun Rais in goal. It sails narrowly high over the angular of the frame
27' Mesbah tries to restore parity with his header straight into Akinfeev's arms
29' SAVE! Fine save from Akinfeev to beat away Slimani's header over the crossbar
34' Russia working in some great crosses from their left flank. This time it reaches the back post but Rais was equal to it
36' Some great one-touch football by Algeria but Djabou was blown for offside
38' Glushakov's free-kick is long and sails out of play, causing no trouble for Algeria
39' Djamel Mesbah (Algeria) is cautioned.

40' Kombarov delivers a free-kick into the box but it is cleared by Halliche
43' Slimani with a stinging header directly into the torso of Akinfeev
44' One minutes of added time will be played
45 + 1' The referee brings the first half to an end.

46' The second half is underway
47' Nearly 2-0!! Russia dances his way throw the defence but his final touch lets him down as M'Bohli beats away his shot from close range
51' Kerzhakov tries an effort from range but it blocked by the Algerian back line and deflected out for a corner
54' Bentaleb nods away a cross from Kerzhakov.
56' Dmitri Kombarov (Russia) is cautioned.

58' Belkalem is penalised for a foul in the box. Pity his header was low and tested Akinfeev
59' Aleksei Kozlov (Russia) is cautioned.

61' Slimani does brilliantly to nod home the equaliser at the back post after Akinfeev came off his line.
62' Denisov stings the palms of Rais with a great hit
67' Russia: Alan Dzagoev replaces Oleg Shatov

69' As it stands, Algeria are going through. Great save by Rias to deny Kerzhakov with a shot from just inside the area
71' Algeria: Hassan Yebda replaces Yacine Brahimi

74' Feghouli with a tame effort in the end after working hard to burst into the box
76' Algeria: Nabil Ghilas replaces Abdelmoumene Djabou

85' Russia with all the pressure now. Algeria just sitting deep and looking to defend
86' Nabil Ghilas (Algeria) is cautioned.

90' CLOSE!! Russia send a header narrowly out at the near post.
90 + 2' Great closing down of Russia's counterattack
90 + 4' The referee blows the whistle for Full Time.

Welcome to the live play-by-play for the 2014 FIFA World Cup Brazil match between Algeria and Russia at Arena da Baixada.

Algeria held Russia to a 1-1 draw to qualify for the knockout stages of the FIFA World Cup for the first time in their history as they finished second in Group H at the Arena de Baixada on Thursday evening.

Islam Slimani helped fight back from a goal down to score the decisive goal which saw the North Africans eliminate Fabio Capello’s side and join fellow African Nigeria in the Last 16.

Russia was the team to get off on a more quieter note but they were the one’s to break the deadlock after just six minutes when Aleksandr Kokorin headed in a perfect cross to make it 1-0.

Sofaine Feghouli responded with a great faint and dink into the box for Yacine Brahimi seven minutes later. The Russian goalkeeper spilt the effort but luckily for him it got cleared away.

Russia were doing well to pressure Algeria’s goal. Oleg Shatov was the next player to threaten with a sublime snap-shot that saw the ball sail narrowly high over the angular of the goal frame.

Two great chances then fell to the Fennec Foxes just before the half hour mark. Djamel Mesbah tried to restore parity for the Algerians, but his header inside the box went straight into Igor Akinfeev’s arms, while Islam Slimani saw his stinging effort tipped over the crossbar.

Brahimi offered a shot directly at goal ten minutes from the break, while Fabio Capello’s men also had to deal with a stinging header from Slimani that hit straight into Akinfeev’s torso.

It was so nearly 2-0 to Russia immediately after the restart. Andrey Samedov broke from the Russia midfield and played a neat one-two with Kokorin. The goalscorer found himself one-on-one with Rais Mbolhi, but the Algeria keeper thwarted away the strike from close range.

Algeria started to come out and apply a bit more pressure, particularly on the flanks, and they were winning several set-pieces around the box.

It was indeed from a free-kick that the Foxes did eventually find their equalizing goal. Slimani rose above everyone and nodded in a crossed ball to make it 1-1 on the hour mark and give them hope of progression.

Feghouli struck a tame effort at goal 15 minutes from time, as they valiantly defended the pressure of the Russians to meet Germany in the next round of fixtures.

Algeria will seek a historical qualification for the knockout stage of the FIFA World Cup on Thursday, when they face Russia in Curitiba in their final Group H outing.

The ‘Fennecs’ are currently lying second in their pool on three points and will book their ticket for the next round should they defeat the Russians, while a draw will also see them through unless group leaders Belgium fall heavily to Korea Republic.

As for Russia, they will only reach the round of 16 of the competition with a win and any other result will send them packing, after a disappointing start to the tournament that saw them cash a single point in their first two matches.

Following a 1-2 loss against European giants Belgium, Algeria bounced back in style with a convincing 4-2 thrashing of Korea Republic, and their fans can reasonably hope for a feat against Fabio Capello’s men should they display the same football.

But national coach Vahid Halilhodzic remains extremely wary of their opponents, who have their backs against the wall.

“Russia are a very tough opponent. I watched all their games and believe me, they are an excellent team. They played very well against Belgium. They are a very solid side technically, tactically and especially physically,” Vahid told the media in a press conference.

Algeria are, however, ready to face their destiny, fully aware that they can make history in Curitiba on Thursday.

The match will kick-off at Arena da Baixada at 22h00 CAT.