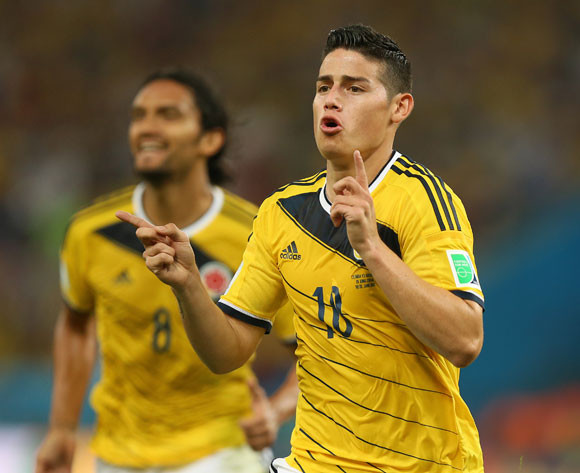 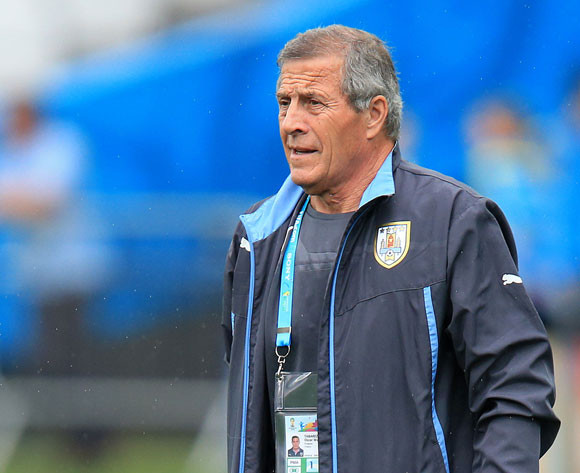 Welcome to the live play-by-play for the 2014 FIFA World Cup Brazil match between Colombia and Uruguay at Estadio do Maracana.

46' The second half is underway
50' James Rodriguez (Colombia) scores!

Welcome to the live play-by-play for the 2014 FIFA World Cup Brazil match between Colombia and Uruguay at Estadio do Maracana.

A goal either side of the break from James Rodriquez secured a 2-0 win for Colombia over Uruguay in a 2014 World Cup tie at the Estadio do Maracana in Rio de Janeiro on Saturday.

The win secured Los Cafeteros place in the quarter-finals for the first time in their history where they will now face hosts Brazil in Fortaleza for a place in the final four.

Diego Forlan filled in for the suspended Luis Suarez while Colombian head coach Jose Pekerman reverted back to the starting XI that won their opening two Group C matches with the exception of Jackson Martinez who was preferred to Victor Ibarbo.

Colombia enjoyed the upper-hand in the opening exchanges with James Rodriquez and Juan Zuniga forcing Fernando Muslera into action.

Rodriquez opened the scoring with arguably the goal of the tournament thus far, in the 28th minute of the hotly contested encounter.

The 22-year-old controlled the ball on his chest before striking an unstoppable left-footed volley from outside the area into the back of the net via the underside of the crossbar.

The Monaco midfielder subsequently became the first player since 2002 to score in his first four games at the World Cup, the last to do so is Brazilian duo Ronaldo and Rivaldo.

Uruguay went in search of an immediate reply and went close via Edison Cavani who's 33rd minute free-kick from 25 yards sailed just over David Ospina's goal.

Alvaro Gonzalez forced Ospina into a fine save six minutes later, the Lazio midfielders strike through a sea of defenders looked destined for the back of the net, but Ospina was up to the task.

Colombia deserved 1-0 leaders at the break thanks to a wonder-strike from Rodriquez.

Rodriquez completed his brace five minutes into the second stanza.

Pablo Armero picked out Juan Cardado at the far post with a superb cross, who in-turn did very well to head the ball back into the centre for Rodriquez to tap in.

Uruguay, who were clearly missing Suarez' movement continued to try their luck from range, Cristian Rodriquez stinging attempt in the 64th minute forced Ospina into a fine save.

Ospina was again called into action in the 79th minute, this time the Los Cafeteros shot stopper did well to smother Maxi Perreira's effort from close range.

Uruguay showed no signs of giving up with Ospina doing well to keep out Cavani's rasping effort at his near post five minutes later.

La Celeste were unable to relive the magic of World Cup 1950 as the current Copa America champions bowed out of the tournament at the expense of their South America rivals.

Without Luis Suarez Uruguay will look to rebuild their name when they face South American rivals Colombia in the round of the Last 16 of the FIFA World Cup.

Oscar Tabarez’s side has been in the headlines since Tuesday evening and despite having qualified for the knockout stages it was for all the wrong reasons.

A physically taxing display against the Italians in Natal was the least of their worries as Suarez sunk his teeth into Italy defender Giorgio Chiellini’s shoulder.

The Liverpool hit-man may have walked away from the match unscathed with a caution, but FIFA have since confirmed that the three-time biting culprit will miss out the remainder of Uruguay’s World Cup.

Suarez received a four-month ban from all footballing activities, meaning not only will he not turn out against Colombia but he is barred from being in the stadium on the night as well as training with the squad.

“Such behaviour cannot be tolerated on any football pitch, and in particular not at a FIFA World Cup when the eyes of millions of people are on the stars on the field.

“The Disciplinary Committee took into account all the factors of the case and the degree of Mr Suárez’s guilt in accordance with the relevant provisions of the Code. The decision comes into force as soon it is communicated,” said Claudio Sulser, chairman of the FIFA Disciplinary Committee.

Meanwhile, Uruguay still have a team laden with talent and will be even hungrier heading into the game looking to restore some pride in their team.

It will be no easy task, however, as Colombia have been one of the most exciting teams to grace the newly built stadiums in Brazil.

Their fluid play and inevitable team spirit has seen them dazzle and the likes of James Rodriguez and Jackson Martinez come to the fore with some impressive goals.

Los Cafeteros’ progression into the Last 16 was a magical one at that. Having taken maximum points off all their opponents in Group C, they were afforded the chance to hand their second choice goalkeeper Faryd Mondragon a spot of game time.

The 43-year-old became the oldest ever player to feature in the World Cup finals and his raw emotion upon coming onto the field stilled the spectators’ heartbeats.

“It was unbelievable, I think everyone was waiting for this moment. Thanks to Jose Pekerman and the rest of the team, my friends, this dream was able to come true for me.”