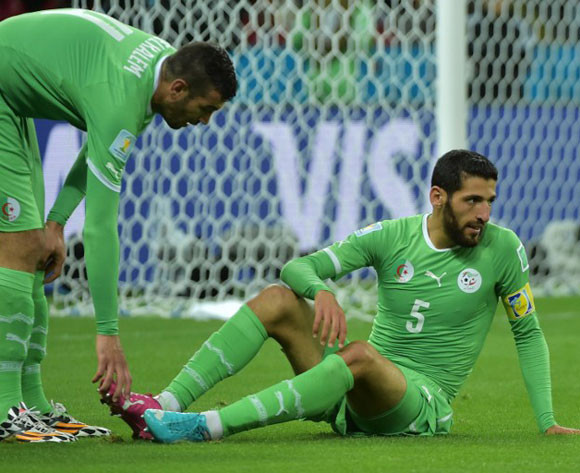 Algeria's defender Essaid Belkalem (L) and Algeria's defender Rafik Halliche dejected. AFP
Welcome to the live scoring of the FIFA World Cup Last 16 knockout game between Germany and Algeria.
Algeria carry the hopes of Africa after Nigeria bowed out with a 2-0 loss to France earlier tonight. The Algerians are the only side from Africa still in the finals.
Algeria have set up with five across the back and four in midfield with one striker. Will they contain the Germans?
1' The match is underway!
3' Lahm shows his class with a through ball for Mustafi, but he is offside.
5' Germany's Thomas Muller has 9 World Cup goals in nine appearances. Will he produce another goal tonight?
9' Slimani gets free on the counter attack and Neuer is a long way out of his goal, but he recovers well by blocking Slimani's shot.
14' A cracking shot from distance by Schweinsteiger, with his left foot, but the Algerian goalkeeper makes a solid save.
15' Sofiane Feghouli will be kicking himself after getting into a brilliant position only to sky his effort when he could have crossed to find a teammate right in front of goal.
17' Algeria have the ball in the net, but the header is ruled out for offside. Slimani showing his intent in front of goal.
19' Some very encouraging attacking play by Algeria who go close when Ghoulam drags his effort across goal and wide of the far post.
24' Good work by Mbolhi to tip Ozil's miscued cross over the bar.
28' More good work by Neuer to come off his line and clear the danger, this time after Feghouli used his pace to create something for Algeria.
35' That is why Germany are so dangerous. A first time cross by Mustafi, and Muller pounces with his head, but puts his header wide.
41' The game is opening up now with chances on both ends, the crowd getting into the action. Who will score the opener?
42' Rafik Halliche (Algeria) is cautioned.

44' Kroos with a left footed attempt on the turn, but the shot sails wide of the top corner of goal.
45' The referee brings the first half to an end.

45' Goalless at the break, but an open game in which there have been some chances on both ends. Algeria have asked plenty of questions of Germany.
46' Germany: Andre Schurrle replaces Mario Goetze

46' The second half is underway
48' Close to a German goal. Some good work by Schurrle and a deflected shot sails just wide of goal.
49' Mustafi gets his head onto a cross but sends the ball right into Mbolhi's hands.
55' Great save by Mbolhi to get a touch to a rasping Philipp Lahm shot that was heading into the top corner.
58' Sofiane Feghouli (Algeria) plays in a hopeful cross, but it doesn't find its way to any of his teammates.
61' Corner to Germany, but Algeria clear the danger. The game has opened up a lot now.
66' Halliche blown up for a foul on Schweinsteiger. He will have to be careful now as he is already booked.
70' Germany: Sami Khedira replaces Shkodran Mustafi

72' Neuer again does well as a sweeper-keeper coming out to clear the danger with Slimani closing in on goal following a long ball.
75' Feghouli tries a snap shot, turns and shoots but the ball is wide of Neuer's goal.
78' Algeria: Yacine Brahimi replaces Saphir Taider

79' So close! Great run by Muller, excellent cross, but Schweinsteiger can only glance his header across goal and wide of the post.
80' What a save! Mbolhi makes a stupendous save to keep out Mullerâ€™s close range header. Then, Schurrle is denied on the rebound.
82' Now Muller puts a shot wide, after a great first touch to set himself up inside the area.
89' Once again Neuer fantastic off his line, cleaning up the through ball as Algeria broke free.
90' Schweinsteiger in space and unmarked, but he cannot direct his header past Mbolhi.
90' The referee blows the whistle for Full Time.

90' The players are getting ready for extra time now.
90' The referee signals the start of the first period of extra time.

102' So close to an equaliser as Mostefa puts his shot wide of the post.
105' The referee blows for the end of the first period of extra time.

112' The players, many of them, are struggling with cramp now. It has been a thrilling match.
117' Time running out now for Algeria. Just three minutes of extra time to go.
118' Muller goes round the goalkeeper, but cannot make the most of the opportunity. Still 1-0 to Germany.
119' Mesut Ozil (Germany) scores!

120' The referee blows for the end of the second period of extra time.

Africa’s World Cup is over after Germany defeated Algeria 2-1 after extra time in their thrilling Last 16 clash in Porto Alegre.

The match ended 0-0 after the regulation 90 but there could have been plenty of goals given the scoring chances created by both teams and the end to end nature of the match.

It was German substitute Andre Schurrle who broke the deadlock with a deft touch in the second minute of extra time, a goal that looked to have ended Algeria and Africa’s World Cup.

But then Mesut Ozil added a second goal late in extra time before, and just moments later, Abdel Djabou pulled one back for Algeria and no sooner did the referee’s whistle blow for the end of the match.

Algeria had their moments and could have sent the Germans home early. Playing mainly on the break and set up in a 5-4-1 system, put up a strong fight and had plenty of chances to score during regulation time.

In the ninth minute Algeria showed their intent to hit Germany on the counter attack when Islam Slimani broke free and with Manuel Neuer way off his line, the goalkeeper ended up recovering well to block Slimani’s shot.

Five minutes later and Algeria gave Germany too much space in midfield, Bastian Schweinsteger let rip with a left footed drive from long range but it was saved well enough by Rais Mbholi.

A minute later and Sofiane Feghouli did well to cut inside from the right and find himself inside the German danger area, but instead of crossing to a teammate right in front of goal he tried to shoot from a tight angle and blasted his effort over the bar.

And moments later Algeria almost did take the lead when Faouzi Ghoulam made a good run into the danger area, picked up the ball and blazed his effort across goal but wide of the far post.

After 34 minutes, Germany came close to scoring when Mustafi hit a first time cross into the danger area and Thomas Muller got on the end of it, but could not get his header on target.

The final ten minutes of the opening half saw the ball swing from end to end with a few scoring chances coming from both sides. Germany headed into the break knowing that the Algerians have asked plenty of questions of them so far.

A bright start to the second half with two scoring chances for Germany. First, substitute Schurrle got into space and shot at goal, but his attempt was blocked and the deflection sailed just wide of goal. Then, Mustafi got a header on target from close range, but he hit it directly into the impressive Mbolhi’s hands.

In the 55th minute German skipper Philipp Lahm latched onto a shot from distance and Mbolhi just got a fingertip to the ball to keep it away from goal, when it looked as if it would nestle inside the top corner.

In the 75th minute Slimani tested Neuer from distance, but while there was powers in the shot, it was straight at the German number one.

With eleven minutes to go, Germany came close when Muller hit the byline and swung in an excellent cross, but Schweinsteiger could only glance his header across goal and wide of the post.

A minute later and Mbolhi made a stupendous save to keep out Muller’s close range header, and then Schurrle was denied on the rebound.

In the 90th minute, Schweinsteiger found himself unmarked but while he got his header on target there was not enough power to beat the Algerian goalkeeper.

The extra time period saw several players go down struggling with cramps. But the last 30 minutes will be remembered for Schurrle’s close range strike from Muller’s cross, and for Ozil’s second goal for Germany and finally Djabou’s close range finish in the dying seconds.