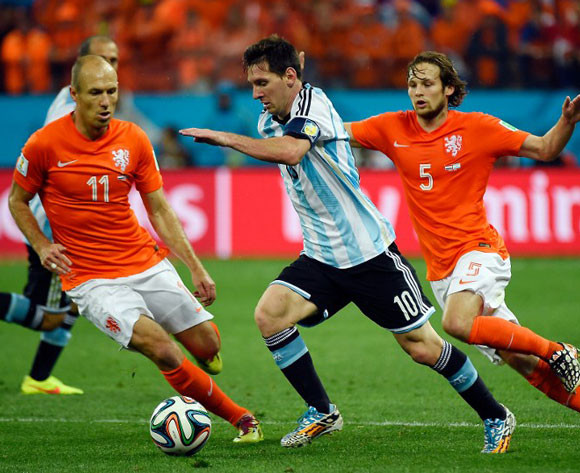 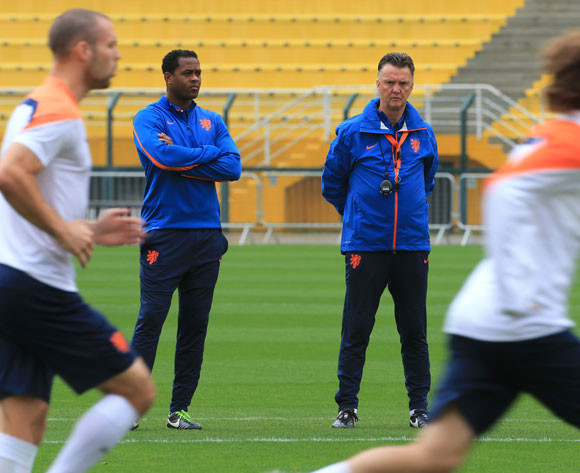 Welcome to the live play-by-play for the 2014 FIFA World Cup Brazil match between Netherlands and Argentina at Arena de Sao Paulo.

The returning Nigel de Jong replaces Memphis Depay who failed to impress in the penalty shoot-out win over Costa Rica.
Jose Maria Basanta makes way for Marcos Rojo while Enzo Perez replaces the injured Angel Di Maria. Sergio Agüero is named among the substitutes.
Players are in the tunnel ... Kick-off imminent
1' The match is underway!
3' The Netherlands seeing most of the ball in the early exchanges, De Vrij with a great tackle to halt Lavezzi's run.
6' Robben looks to find space down the left flank, but a covering tackle by Zabaleta stops the Flying Dutchman in his tracks
8' Chants of 'Holland' Holland as the Netherlands continue to boss possession, Argentina happy to sit back and hit on the counter.
10' Argentina look to carve a way through the Netherlands defence, but Messi is crowded out by Kuyt and Vlaar who clears.
11' Free-kick for Argentina following a foul on Lavezzi.
12' Van Persie clears from danger before Biglia hits a volley into the crowd.
13' Excellent sliding tackle by Mascherano to dispossess Robben.
14' Free-kick Argentina... Messi behind the ball. He has already scored a free-kick in this World Cup against Nigeria. Its powerfully struck but Cillessen is up to the task.
16' Sneijder tries to pick out Kuyt, but his through ball is much to powerful, even for the flying Kuyt.
19' Corner-kick for Argentina, great work by Zabaleta down the right-flank.
20' Messi's low ball into the area comes to nothing.
21' Lavezzi wins Argentina another corner-kick.
22' It comes to nothing as RVP is back there once again to help out in defence.
23' Another corner-kick for Argentina who are starting to look dangerous in attack.
24' Garay gets his head on the ball and Vlaar's foot as he tries to direct a diving header attempt past the Dutch keeper... the ball scoops over though.
27' Mascherano now down on the ground receiving treatment following a clash of heads.
29' Kuyt restarts us, Mascherano is fine and back on the field of play.
31' Heart in mouth stuff for the Argentinian fans every time Robben receives the ball, he wins a corner which Romero clears from danger.
34' For a moment is looked like Messi was through on goal, but the assistant referee's flag is raised.
37' Excellent interception by Vlaar who denies Higuain a sniff.
39' Messi looks to kick-start an attack, but Kuyt is alert and boots the ball up-field
41' And we are into the final few minutes of the first half, unlike the first semi-final this game wont be decided at half-time...
43' Dutch free-kick cleared from danger by Mascherano
45' Bruno Martins Indi (Netherlands) is cautioned.

45' Messi's free-kick is successfully gathered by the Dutch glovasman as we head into two minutes of additional time.
45 + 2' Rojo hopefully over-cooks his cross with Higuain lurking.
45 + 2' The referee brings the first half to an end.

50' Sneijder's free-kick sails over the crossbar.
52' Messi tries to dart through the middle of the Dutch defence, but he is once again crowded out by a handful of players in Orange.
55' Robben at long last has a chance to run at the Argentinian defence, but Biglia is back to clear from danger.
56' Messi tries to dance his way into the area, but Vlaar is there once again. He has been a rock.
59' Critical intervention by Janmaat to deny Higuain a chance.
60' Romero is called into action on the hour mark, he gathers Kuyt ball into the area.
62' Netherlands: Jordy Clasie replaces Nigel de Jong

66' The Dutch now with a sustained spell of pressure, the Argentine defence holding firm at the time being.
68' Garay cleans up at the back as the rain starts to pour down in Sao Paulo
71' Things open up for Lavezzi, but just as he is about to pull the trigger, Vlaar flings himself at the ball to block
73' Free-kick from Messi is hopelessly over-hit, corner-kick
75' Janmaat picks-out RVP who tries his luck, but he is in any case offside. At the other end Perez ball into the area finds Higuain who sends his attempt inches wide. Things starting to open up.
77' Sneijder's free-kick this time is overhit.. it has been one of those nights.
80' Messi tries his luck on two occasions, but both times he is stopped in his tracks.
81' Argentina: Rodrigo Palacio replaces Enzo Perez

84' Rojo tries his luck from range, but Jasper Cillessen is behind the shot.
86' Corner-kick for the Netherlands is cleared from danger.
88' The crowd urge Mascherano to shoot, but he attempts a pass, easy interception for the Netherlands.
90' Three minutes added to the 90
90 + 1' CLOSE! Brilliant cover tackle by Mascherano denies Robben who looked sure to score.
90 + 4' The referee blows the whistle for Full Time.

93' It seems as if Huntelaar might been thrown into the mix, no Krul then? Dutch trying to win this in extra-time
96' Netherlands: Klaas-Jan Huntelaar replaces Robin van Persie

104' Both teams have matched each other blow for blow thus far, who will come out on top? will we see a goal?
105' Klaas-Jan Huntelaar (Netherlands) is cautioned.

106' The Second period of extra time starts.
108' There has been a stop in play with Zabaleta now receiving treatment.
110' De Vrij tries his luck from range... his effort drifts well wide.
114' Nothing to write home about as such... with the game seemingly heading towards a penalty shoot-out.
115' CHANCE! Palacio's header from close range is caught rather easily by Jasper Cillessen
117' Great run by Messi who sets up Maxi Rodriquez, but Jasper Cillessen gathers.
120' One minute has been added... we are off to penalties folks. 2 hours without a goal.
120 + 1' The referee blows for the end of the second period of extra time.

Welcome to the live play-by-play for the 2014 FIFA World Cup Brazil match between Netherlands and Argentina at Arena de Sao Paulo.

Argentina beat the Netherlands 4-2 on penalties in a tightly contested 2014 World Cup semi-final encounter at the Arena de Sao Paulo on Wednesday.

La Albiceleste will now face Germany who beat hosts Brazil 7-1 on Tuesday in a repeat of the 1986 and 1990 finals at the iconic Estadio Maracana on Sunday evening.

For The Netherlands it was another story of nearly, but not quite as the three time runners-up bowed out of the showpiece event.

The game ended goalless after extra-time, the first time in World Cup history that a last four encounter had finished without a goal after two hours of football.

Clear-cut chances were few and far between in what was a tightly contested affair on a damp evening in the South East of Brazil.

The returning Nigel de Jong replaced Memphis Depay who failed to impress in the penalty shoot-out win over Costa Rica.

Attempts at goal were a rarity with both defences holding firm and showing great discipline throughout.

Lionel Messi had a few darts at goal, but it seemed every time he gathered the ball, big Ron Vlaar was there to clear from danger.

Unlike in the first semi-final this game was not decided at half-time, with the teams heading into the tunnel without troubling the scorers.

Louis van Gaal opted to withdraw Bruno Martins-Indi after the interval, the Portuguese born defender made way for Daryl Janmaat, the substitution also forced a change in formation.

Javier Mascherano made an incredible last ditch sliding tackle to deny Robben in the dying embers of the game.

A clever touch by Wesley Sneijder sent the Bayern Munich winger through on goal, he looked certain to score, but Mascherano was back to make a timely block.

Extra-time looked inevitable throughout in what was a tense encounter,  the Netherlands notably failed to register a single shot on target during the 90.

The best chance of extra-time fell to Argentinean substitute Rodrigo Palacio, who saw his rather tame headed effort from close range claimed by Cillessen.

For the first time in 16 years a semi-final at the World Cup would be decided from the spot , the fourth shootout of this tournament.

Sergio Romero emerged the unlikely hero as he denied Vlaar and Sneijder before Maxi Rrodriquez scored the decisive spot-kick to book Argentina's place in the final.

Argentina and The Netherlands clash in Sao Paulo on Wednesday in the second semifinal of the 2014 FIFA World Cup in Brazil.

The match will be a repeat of the two sides World Cup final meeting 36 years ago played-out just next door in Argentina that the latter won 3-1 as hosts.

Holland have gone on to pick up one win and a draw in subsequent World Cup meetings against the two-time World Champions.

Argentina are chasing their fifth final appearance while The Netherlands are looking to qualify for their second successive final but but still in search of their first triumph after coming off second best on three occasions.

The South Americans head into the last four unbeaten with five straight wins scoring seven goals as they move within touching distance their first final since 1990.

Four of those goals were scored by their top scorer and talisman Lionel Messi who has literally carried Argentina on his shoulders to the penultimate stage.

"Argentina are a world-class team," Dutch winger Dirk Kuyt said, "and they deserve to be in the last four. But we want to measure ourselves against the best, and not only measure - but win. That's why we're here. The semi-finals are fantastic but we know what it feels like to lose a World Cup, and we would love to win [the Trophy]. That's our goal."

However, Argentina will be without key midfielder Angel di Maria who sustained in an injury in their 1-0 quarterfinal win over Belgium on July 5.

And Van Gaal said there will be no major changes to his lineups that beat Costa Rica 4-3 on post  match penalties after their scoreless extra-time draw that saw him introduce goalkeeper Tim Krul for first choice Jasper Cillessen just seconds before the dramatic shootout.

"There is no question about who will start next game, it will be Cillessen,” Van Gaal said.
Report