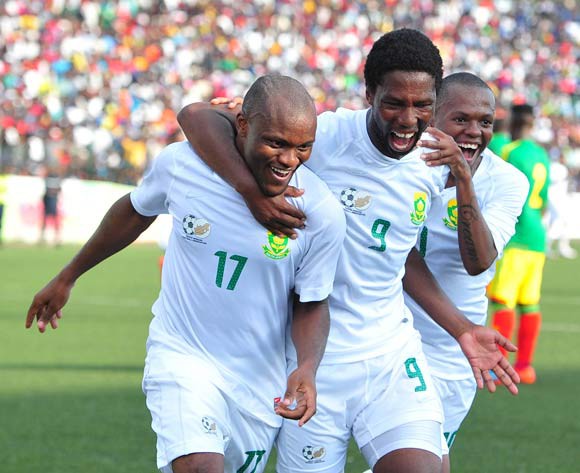 Welcome to the live play-by-play for the 2015 Africa Cup of Nations Qualifiers match between Congo and South Africa at Brazzaville.

It's a key game in Pointe-Noire, with the teams battling for ascendancy in Group A of the 2015 Morocco AFCON qualifiers.
Congo have named a strong line-up featuring dangerous attackers Thievy Bifouma and Prince Oniangue.
SA, meanwhile, have made three changes from their previous line-up, the most notable of which sees 17-year-old defender Rivaldo Coetzee become the youngest player to represent Bafana Bafana.
The national anthems are over and referee Bouchaib El Ahrach of Morocco is just about ready to get this game underway.
1' The match is underway!
2' Congo wear green, yellow and red; South Africa are in all-white.
3' Meyiwa gets his first touch of the ball, easily claiming a harmless through ball.
5' Now Massa at the other end makes a catch from a Bafana free kick that is too deep. Both teams struggling to find a rhythm to their passing on the artificial pitch.
7' Scrambling defence from South Africa... then the visitors counter attack through Serero, but the attacker can't quite get a shot away.
8' Bifouma shoots with the left foot and Coetzee deflects it away from danger for a corner!
9' Dore gets on the end of the corner kick and heads on target, but Meyiwa saves well!

12' Rantie with a good chance in the box, but his touch is poor! However, he does win a corner kick...
13' The corner is played short and then curled in, but it's easy pickings for Massa.

15' Bifouma with a snap shot to the near post and Meyiwa has to scramble to turn it away!
18' Bissiki has played a few errant crosses from the left flank and the home crowd is beginning to get on his back...
20' Coetzee misses his header from a free kick, but it's away for a goal kick to Bafana Bafana anyway.
21' Gandze slips in a promising attacking position for Congo. The pitch is proving problematic for both sets of players.
23' Midway through the first half, still 0-0 between Congo and South Africa.
25' Jali and Ndulula combine beautifully, but neither gets a shot away and it's only a corner to the visitors...
26' The corner is well defended by Congo. They're always going to dominate the aerial battles.

29' Again Gandze slips and the crowd is now getting frustrated with the home team. Music to the ears of the visitors...
32' Masango chips in a cross from the right by-line, Ndulula gets up but his header is off target.
33' Serero cuts inside from the left and shoots... high and wide. He claims a deflection, but the referee disagrees - goal kick Congo.
35' Furman down with a knock from a high foot, but he should be okay to play on.
37' Rantie almost chases down a hopeful long ball from Furman. Neither side has really got it together in attack.
39' Serero tees up Matlaba, whose shot aimed for the top corner is plucked out of the air by Massa!
41' Gandze slips over yet again... it's becoming a farce for him down Congo's left flank.
42' Furman takes another blow. He's always in the wars is the Bafana midfielder...
43' Gandze tries a shot from the edge of the box but scuffs it well wide.
44' Congo with a strong appeal for a penalty, but the referee is uninterested.
45 + 2' The referee brings the first half to an end.

48' Consecutive corner kicks for Congo, the second sees Ndinga shoot wide through a crowd of bodies!

49' Congo take a free kick quickly, Dore is through on goal but Meyiwa comes off his line to make a heroic block! Great save!
49' Francis N'Ganga (Congo) is cautioned.

50' Masango with a snap volley on the left... off the crossbar, so unlucky for Bafana!
52' Bafana on a great counter attack, Masango shoots on goal... tipped over by Massa! Corner kick...
52' Bongani Ndulula (South Africa) scores!

53' The corner kick sees Hlatshwayo head toward goal and Ndulula scores with a bicycle kick that the defender on the line couldn't keep out! Congo 0-1 SA!
55' Tokelo Rantie (South Africa) scores!

56' Furman with a lovely reverse pass for Rantie, who sweeps home a left-footed shot to make it 2-0 to Bafana Bafana!
57' Nganga shoots just over the crossbar from a free kick as Congo look for a quick response!
60' Ndulula shows his confidence as he tries to take a defender on, but he gives the ball away cheaply.
63' Congo: Ladislas Douniama replaces Delvin Ndinga

66' It's been a terrific away performance from SA, but the work's not done just yet...
67' Free header from a corner kick for Dore, but he puts it wide.

70' Twenty minutes to play, SA need to up their tempo again after going off the boil in the last few minutes.
71' Bafana on a counter attack, Rantie should make it 3-0... no, he stabs his effort wide with only the 'keeper to beat!
72' South Africa: Kermit Erasmus replaces Tokelo Rantie

73' Meyiwa with a fumble from Dore's header, but he recovers quickly to prevent a second chance for the home team!
76' Bifouma's free kick tees up a chance for Oniangie from close range, but he somehow pokes it over the top!
78' South Africa: Reneilwe Letsholonyane replaces Mandla Masango

81' Meyiwa comes off his line to make a good punch clear. Congo continue to press, they haven't given up...
90 + 5' The referee blows the whistle for Full Time.

Welcome to the live play-by-play for the 2015 Africa Cup of Nations Qualifiers match between Congo and South Africa at Brazzaville.

Goals from Bongani Ndulula and Tokelo Rantie secured a 2-0 win for South Africa over Congo in a 2015 African Cup of Nations Qualifier at Stade Municipal in Pointe-Noire on Saturday.

The victory moves Bafana Bafana top of Group A after three rounds of qualifiers.

Shakes Mashaba made three changes to the side that held defending Afcon champions Nigeria to a goalless draw last time out with Oupa Manyisa and Sibusiso Vilakazi dropping to the bench.

Bournemouth striker Tokelo Rantie returned to the starting XI along with the recalled Thulani Serero while there was also a start for 17-year-old Rivaldo Coetzee who subsequently became the youngest ever Bafana international.

Thievy Bifouma again proved to be Congo's main attacking outlet with the Almeria forward troubling the visitors defence in the early exchanges.

The lively striker forced Senzo Meyiwa into a good save at his near post in the 15th minute, directing a precise cross on target from an acute angle, the Orlando Pirates shot stopper though was up to the task.

Both sides continued to create chances in the first half with Rantie and Ndulula guilty of squandering have chances for the visitors.

The second-half was non-stop action with N'Dinga shooting over in the opening exchanges following a mad scramble before Meyiwa pulled off an superb save to deny Fode Dore who was straight through on goal.

Mandla Masango then went close for Bafana, rattling the upright with a cracking effort. A quickly taken free-kick caught the Red Devils sleeping and the Kaizer Chiefs midfielder almost made them pay with a fierce effort.

South Africa took the lead through Ndulula in the 52nd minute. Thulani Hlatshwayo's header found the AmaZulu striker who found the back of the net via a bicycle kick.

Three minutes later and it was 2-0. Dean Furman picked out Rantie who made no mistake, firing past Chancel Massa from close range to cap an outstanding passage of play by the visitors.

Chances continued to flow at both ends with Rantie notable missing a golden opportunity to complete his brace in the 71st minute.

Great defending coupled with a number of outstanding saves by Meyiwa kept Congo at bay in the final minutes as Bafana held on to secure a memorable win.

Bafana will welcome Congo to the Peter Mokaba Stadium in Polokwane in the fourth round of qualifiers on Wednesday evening.