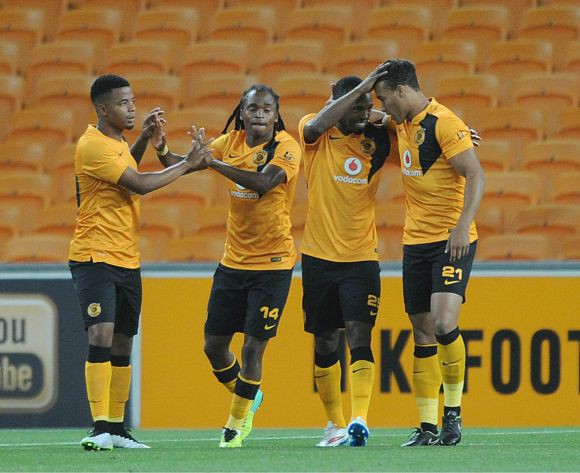 Matthew Rusike of Kaizer Chiefs celebrates a goal with teammates 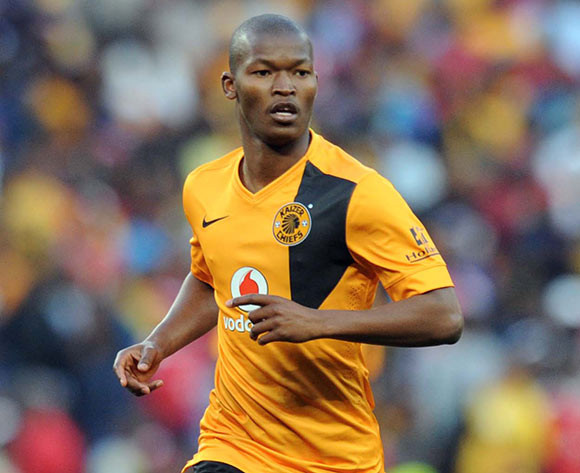 Welcome to the live play-by-play for the 2015 CAF Champions League match between Kaizer Chiefs and Township Rollers at FNB Stadium.

Welcome to live coverage of the preliminary round, first leg CAF Champions League between Kaizer Chiefs and Township Rollers.
It's a Southern African derby at FNB Stadium, with the South African PSL runners-up hosting Botswana Premier League champions.
The teams have made their way out onto the pitch and we are just a few minutes away from kick-off.
1' The match is underway!
2' Chiefs with two successive corner kicks early in the match, the second of which sees Parker with a near-post flick just over the crossbar!

5' It's all Chiefs in the early minutes, with Rollers working hard to close down the space in their own half.
6' Matthew Rusike (Kaizer Chiefs) scores!

7' Chiefs steal the ball in midfield, Parker puts Rusike in on goal and the striker finishes with a low shot to make it 1-0 to the home side!
9' That's just the start Chiefs will have been looking for, Rollers now cannot just sit back and look to frustrate them.
10' Sikele with a clever off-the-ball run, but the through pass for him is collected by Khune.
13' Rollers now getting a foothold in the game after the shock of that early goal.
15' Mathumo with a massively ambitious long-range shot from a free kick, which is well off target.
16' Another corner to Chiefs, this time Rollers' defending from the set piece is solid.

18' Rusike with a chance for 2-0, but he's denied by Masule! Then Lebese cannot make anything of the loose ball...
19' Rusike is through on goal again, but his indecisiveness allows Ditshupo to get back and steal the ball!
21' Township Rollers: Moemedi Bolweleng replaces Otlaantshekela Mooketsi

24' Boys gets across the front of Chiefs' defence but cannot turn Kebaikanye's cross on target... first sign of a potent attacking threat from Rollers.
26' Successive corner kicks for Chiefs, but again Rollers do enough to repel the threat.
29' Letsholonyane heads on target from a loose ball in the box, but his effort is deflected away by a defender.
30' Louis with snap shot from long range, but it's no threat to goalkeeper Khune.
32' Sikele with a sight of goal, but he slices a long range shot well wide.
33' Tshabalala beats the offside trap, but his first touch is poor and he eventually drags his shot wide.
35' Rollers slice Chiefs' defence apart with a good passing move, Boy tees it up for Louis but he shoots over with only the 'keeper to beat! That should have been 1-1!
38' Parker shoots for goal from a free kick... just over the bar, though Masule seemed to have it covered.
39' Parker with a turn and shot... straight into the arms of Masule.
41' Boy meets a left flank cross and heads wide, but he was flagged offside anyway.
42' Rusike gets on the end of Lebese's cross with a diving header... the ball skips away off the top of the crossbar!
44' Masilela tries a long range shot, but it's well wide.
45 + 2' The referee brings the first half to an end.

46' The second half is underway
47' No changes from either team at the start of the second half.
48' Segolame Boy (Township Rollers) scores!

49' Lovely play from Rollers, with one-touch football handing Boy a chance and he fires it into the bottom corner, 1-1!
50' Simisani Mathumo (Township Rollers) is cautioned.

59' Letsholonyane with a long range shot... high and wide.
61' The ball falls for Parker in the 'D' of the box... struck over the bar!
63' Mashamaite with some good cover defence as Boy's pace threatens Chiefs again...
64' Obuile Ncenga (Township Rollers) is cautioned.

67' Midway through the second half, Rollers are just 23 minutes (plus injury time) away from a great result in South Africa.
70' Rollers have Ngwenya warming up on the sidelines, he may be introduced soon.
72' Maluleka with a long range shot... deflected off a defender and wide of the goal for a corner kick.
73' The corner comes to nothing for Chiefs, who are getting more and more frustrated in this match.
74' Masango controls a long ball into the box, but he cannot get a clean shot away.
75' Township Rollers: Manqoba Ngwenya replaces Jerome Louis

78' Ngwenya shoots from a free kick... but it's high over the target.
79' Parker picks up a pass on the edge of the box, steps off a defender and shoots wide of the far post!
81' Less than 10 minutes to play now, Chiefs win a free kick just outside the Rollers penalty area.
82' Kaizer Chiefs: Siphelele Mthembu replaces Reneilwe Letsholonyane

83' Maluleka's free kick looks for the head of Mashamaite, but it's well defended by Rollers.
84' George Maluleka (Kaizer Chiefs) is cautioned.

90' Koko flagged offside for Rollers, who are so close now to a great away draw.
90 + 3' Tefu Mashamaite (Kaizer Chiefs) scores!

90 + 4' Mashamite gets up to power home a header from a corner and win it at the death for Chiefs!
90 + 5' The referee blows the whistle for Full Time.

Chiefs win 2-1 thanks to a goal right at the death, but Rollers deserve great credit for their performance and will have a very realistic chance of overturning the deficit in the second leg.

Welcome to the live play-by-play for the 2015 CAF Champions League match between Kaizer Chiefs and Township Rollers at FNB Stadium.

Kaizer Chiefs needed an injury-time goal to claim a 2-1 win over Botswana’s Township Rollers in a preliminary round, first leg CAF Champions League clash at FNB Stadium on Saturday.

It looked as if Amakhosi would steamroll their visitors after claiming an early lead and carving out several more good chances in the opening quarter of the game, but the Botswana side grew in confidence as the match progressed and deserved more for their efforts.

It took the hosts just six minutes to break the deadlock. After winning the ball in midfield, Bernard Parker was able to put Matthew Rusike in on goal with a well-weighted pass and the Zimbabwean coolly beat the goalkeeper to make it 1-0.

Amakhosi created several chances to add to their advantage, but the likes of Rusike, Reneilwe Letsholonyane and Siphiwe Tshabalala spurned their opportunities and with them a chance to effectively kill off the game inside the first half hour.

The Soweto giants were nearly punished for their profligacy in the 35th minute when a fine passing move from Rollers gave Jerome Louis a sight of goal with only the ‘keeper to beat, but he blazed his shot high and wide.

The half ended with Chiefs still a goal to the good, but Rollers remedied that just a couple of minutes after the restart. Some slick one-touch passing saw the ball fall for striker Segolame Boy in the penalty area and he beat Itumeleng Khune with low, left-footed shot to make it 1-1.

The match looked destined to end in a draw, but a corner kick in the third minute of injury time at the end of the game saw Tefu Mashamaite get up ahead of the goalkeeper and power home a header to hand his side a narrow 2-1 victory.

The return leg will be played in Gaborone in a fortnight’s time.

South Africa’s Kaizer Chiefs and Botswana’s Township Rollers will face off in a regional derby in a CAF Champions League first leg, preliminary round match on Saturday. Kick-off at the FNB Stadium in Soweto is set for 19h30 CAT.

For Chiefs, competing in the 2015 Champions League presents them with an opportunity to atone for last year’s failure.

The Amakhosi failed to impress upon their return to African club competition in 2014, being eliminated from the Champions League in the second round after an aggregate defeat to eventual runners-up AS Vita of DRC, before exiting the Confederation Cup after a seemingly disinterested performance against ASEC Mimosas.

The difficulty of competing both domestically and on the continent took its toll on Chiefs last season, as they relinquished a healthy lead at the top of the Absa Premiership, seemingly due to mental and physical fatigue.

Avoiding such a drop in their performances seems more likely this year: they have yet to taste defeat in their domestic league in 2014/15 and boast a big lead at the top of the table, perhaps giving them more freedom to put energy into their continental campaign.

Chiefs have not enjoyed any notable success in the Champions League, though they did win the African Cup Winners’ Cup (named the Mandela Cup at the time, now incorporated as part of the Confederation Cup) in 2001 and would love to match arch rivals Orlando Pirates’ feat (the Buccaneers won the African Cup of Champions in 1995).

Their opponents, Township Rollers, are the reigning champions of the Botswana Premier League. Nicknamed ‘Mapalastina’, they have never progressed into the latter stages of the Champions League, though they should not be underestimated.

Rollers have been a port of call for some of Botswana’s best players in recent years, including the likes of Dipsy Selolwane, Mogogi Gabonamong and Joel Mogorosi, all of whom have gone on to feature prominently in the PSL. They also boast the talents of former Mamelodi Sundowns forward Manqoba Ngwenya.

Nonetheless, Chiefs will be confident of coming out on top over the two legs of this Southern African derby (the second leg will be held in Gaborone on the weekend of February 27 to March 1). Should they do so, the Amakhosi will face either Raja Casablanca (Morocco) or Diables Noirs (Congo) in the first round.