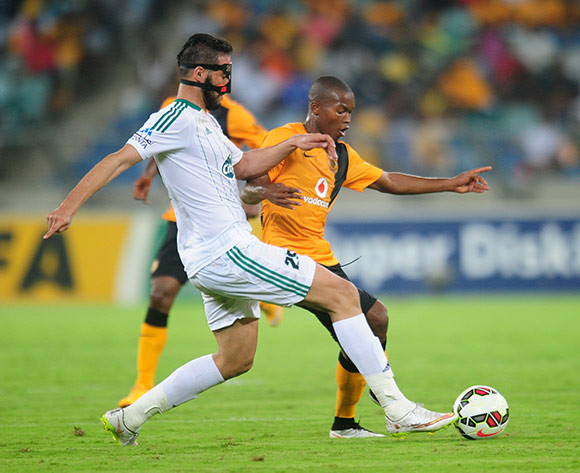 during the 2015 CAF Champions League football match between Kaizer Chiefs and Raja Casablanca at the Moses Mabhida Stadium in Durban , Kwa-Zulu Natal on the 14th of March 2015 ©Sabelo Mngoma/BackpagePix 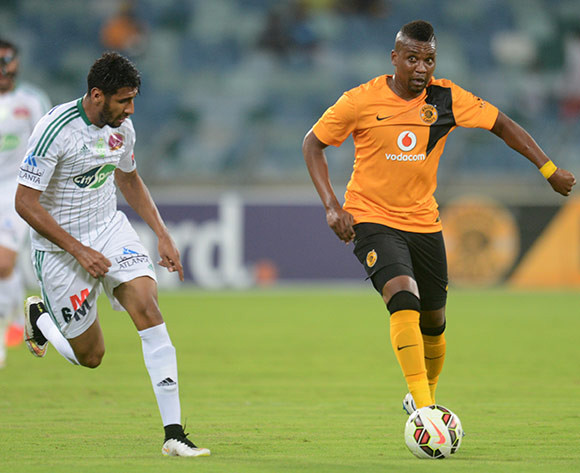 Welcome to the live play-by-play for the 2015 CAF Champions League match between Raja Casablanca and Kaizer Chiefs at Casablanca.

1' The match is underway!
25' Morgan Gould (Kaizer Chiefs) is cautioned.

Welcome to the live play-by-play for the 2015 CAF Champions League match between Raja Casablanca and Kaizer Chiefs at Casablanca.

A brace from Ighodaro Christian Osaguona saw Raja Casablanca dump Kaizer Chiefs out of the CAF Champions League after the Moroccan side beat their South African rivals 2-0 in a second leg match at the Stade Mohamed V on Sunday night.

The result sees Raja Casablanca into the next stage of the CAF Champions League 3-0 on aggregate after winning the first leg 1-0.

The first 45 produced very little in terms of real goalmouth action as both teams defended well.

The hosts saw the majority of the ball early on, but they struggled to break down a resolute Amakhosi defence.

The closest we came to a goal in the opening half was when George Lebese saw his shot form the edge of the box deflected narrowly wide of the Raja Casablanca goal.

The home side did not really threaten the Amakhosi goal – their only attempt came just after the half hour mark when a shot from Vivien Mabide was blocked on the goalline by captain Tefu Mashamaite.

Chief suffered a bit of a set-back a minute before the break when Morgan Gould had to leave the field injured and was replaced by Erick Mathoho.

The half ended 0-0, but saw Raja Casablanca leading 1-0 on aggregate.

Chiefs came out firing in the second half and Lebese should have given them the lead on the night three minutes after the restart when his shot from close range shaved the wrong side of the upright.

The South African team continued to press forward and Mandla Masango came close to scoring in the 66th minute when he met a Matthew Rusike cross, but his header was well-saved by the keeper.

With Chiefs pushing forward they left themselves exposed at the back and Ighodaro Christian Osaguona made the most of a mistake in defence in the 86th minute to slot home from close range, 1-0.

Victory was made certain for Raja Casablanca with their second goal on the night courtesy of Ighodaro Christian Osaguona yet again to seal their place in the next round of the CAF Champions League with a 2-0 win in the second leg.

Kaizer Chiefs will hope to capitalise on Raja Casablanca’s troubles when the teams meet for the second leg of their first round CAF Champions League tie on Sunday night at the Stade Mohamed V in Casablanca, kick-off at 21h00 CAT.

The first leg in Durban last month saw the Moroccan side claim a 1-0 win, putting them in pole position to advance to the last 16. The result could have been a totally different one had the Amakhosi capitalised on the numerous chances they created.

Instead they head to Morocco knowing that they must score at least one away goal to remain in the tie and prevent a second successive early exit from Africa’s premier club competition, having been eliminated in the second round by AS Vita of DRC last year.

Striker Bernard Parker is convinced the Soweto side can turn the tables on their North African opponents, citing the experience that he and the likes of Itumeleng Khune, Tsepo Masilela and Reneilwe Letsholonyane have of playing in Morocco – they were part of a Bafana Bafana team that drew 1-1 with the hosts at Stade Agadir in October 2013.

“After the game in Durban, we know now how [Raja] play,” Parker told his club’s official website. “We created numerous chances in the first leg. We definitely need to be sharper in front of goal in the second leg if we want to make a chance. However, we travel in a positive frame of mind to Casablanca. We are confident that we can get a result.”

As for Raja, they enter the game almost in a state of turmoil. They have lost back-to-back Moroccan league matches to slip to eighth on the log and have lost their last three matches at their own stadium – a shocking statistic for a team that was once considered virtually unbeatable in their own backyard.

In addition, striker Hamza Abourazzouk, who appeared as a substitute in the first leg against Chiefs, has been suspended until the end of the season due to disciplinary reasons, while Portuguese coach Jose Romao is reportedly on the verge of being fired.

The referee for the match will be Malang Diedhiou of Senegal, while the aggregate winners of the tie will advance into the second round to face either Real Banjul of the Gambia or Algeria’s ES Setif, the current Champions League title holders.