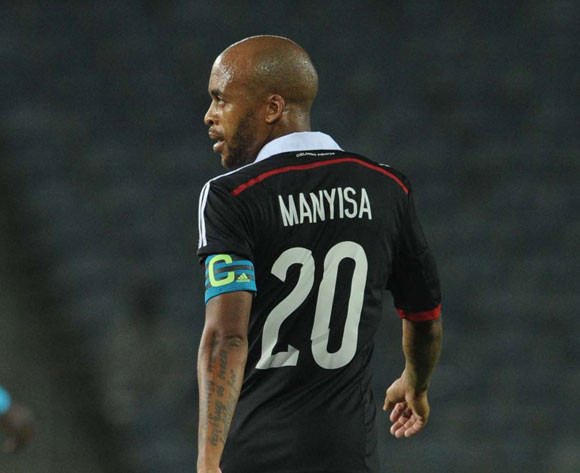 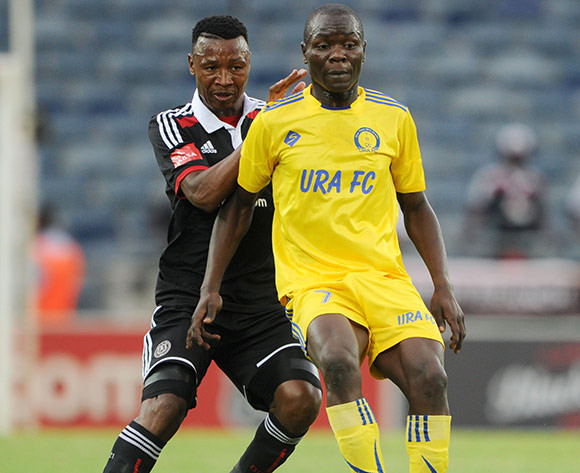 Kalends Frank of URA challenged by Siyabonga Sangweni of Orlando Pirates during the 2015 CAF Confederations Cup match between Orlando Pirates and URA at the Orlando Stadium, Soweto on the 14 March 2015 ©Muzi Ntombela/BackpagePix

Second half goals by Mpho Makola and Manyisa Oupa were enough to see Orlando Pirates qualify for the next round of the CAF Confederations Cup after drawing 2-2 with hosts URA FC.

The team coached by former South African international Eric Tinkler fought back strongly from a goal down to draw 2-2 in the second leg played in Kampala on Saturday to qualify on a 4-3 goal aggregate.

URA FC scored a goal through Yasser Mugerwa in the 36th minute after a neat cross by skipper Simeon Masaba.

After several attempts by Mpho Makola which were stopped by URA FC goalkeeper Brian Bwete, the home team fought back strongly with a neat passing game.

It was a good cross from skipper Simeon Masaba that Mugerwa capitalised on to send a hard shot that beat Brighton Mhlongo in goal for Orlando Pirates.

On resumption, the South African team that won the CAF Champions League in 1995 fought back strongly to try and get a goal.

After 53 minutes Makola headed in the equalizing goal for Orlando Pirates before Manyisa converted a penalty on 68 minutes.

Earlier URA FC’s Saidi Kyeyune should have scored the second goal for URA FC, but with only the goalkeeper to beat after 57 minutes, he blasted out.

“We are happy that even with some of our key players out injured, we have managed to qualify for the next round,” Coach Tinkler said after the match played at the Mandela National Stadium, Namboole.

“It is very disappointing that we created many chances but failed to take them,” said a disappointed URA FC Coach Alex Isabirye.

Head Coach of URA FC, Alex Isabirye has said they are ready to take on Orlando Pirates in the second leg of the CAF Confederations Cup on Saturday at the Mandela National Stadium, Namboole.

Isabirye whose side stopped SC Victoria University 2-0 in Uganda Premier League (UPL) tie on Tuesday told AfricanFootball.com that they are ready to take on the South African side.

“We simply need to be very cautious and avoid silly mistakes at the back. Scoring early goals will be very important for us because we need the goals and also be tight at the back,” added Isabirye.

Although Orlando Pirates carry a 2-1 advantage, the Ugandan side could easily qualify if they manage to squeeze a 1-0 victory.

Although Coach Eric Tinkler’s team will miss the services of injured defender Thabo Matlaba who picked an injury in during South Africa’s International friendly against Nigeria, the likes of Rooi Mahamutsa and Lehlohonolo Majoro who netted in the first leg will be the other players to watch together with Oupa Manyisa.

The good news for URA FC is the return of striker Frank Kalanda and Yasser Mugerwa who had been out injured. “These players will add something to our team and Orlando Pirates should not take us for granted,” said Isabirye, a former Uganda Cranes attacking midfielder.

Former Uganda Cranes defender Simeon Masaba and Saidi Kyeyune are also expected to play key roles to help the Ugandan side qualify for the next stage. URA FC will however miss the services of striker Robert Ssentongo who is still serving a CAF suspension after receiving a red card in the preliminary match against Madagascar’s ASSM Elgeco Plus.