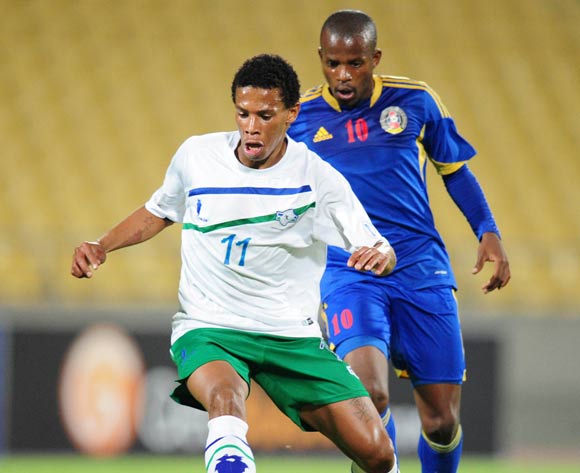 Tsoanelo Koetle of Lesotho challenged by Zweli Nxumalo of Swaziland during the 2015 Cosafa Cup match between Lesotho and Swaziland at the Royal Bafokeng Stadium, Rustenburg on the 20 May 2015 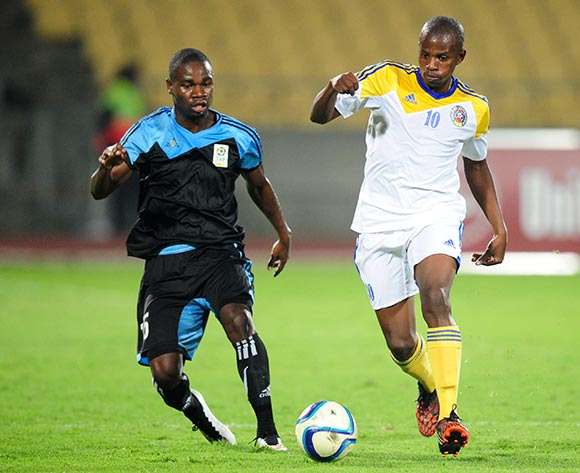 Zwell Nxumalo of Swaziland challenged by Shomari Kapombe of Tanzania during the 2015 Cosafa Cup match between Tanzania and Swaziland at the Royal Bafokeng Stadium, Rustenburg on the 18 May 2015 ©Muzi Ntombela/BackpagePix

Swaziland have registered their second win after beating Lesotho 2-0 during the 2015 Cosafa Cup match at Royal Bafokeng Stadium in Rustenburg on Wednesday night.

A simple tap-in in the first half by Xolani Sibandze, after a rocket shot from Zweli Nxumalo which came back off the crossbar, and a simple conversion in the second half by Mthunzi Mkhontfo meant Isihlangu Somnikati have registered two wins after beating Tanzania in their opening tie on Monday.

The win takes them closer to Madagascar, as they’re both on six points, whilst Likuena registered their second loss.

However, in the 11th minute, Likuena had their first attempt at goal through Tsoanelo Koetle after taking a tame shot which was easily dealt with by goalkeeper Mphikeleli Dlamini.

In the 18th minute, the experienced Tony Tsabedze found the back of the net for the Swazis but he was ruled offside, with the replay showing clearly that he was on.

Harry Bulunga’s men pushed forward and managed to keep Likuena under pressure when Sibandze saw his shot cleared off the line by Lesotho defender Nkau Lerotholi in the 21st minute, taking his side closer to opening their account.

Three minutes later, Tsabedze unleashed a powerful shot from the right but it was well read by goalkeeper Khouloe Phasumane.

Going to the tunnel, Isihlangu Somnikati were enjoying the lead and in the second stanza they made all the efforts in probing for a second goal. Zweli Nxumalo first tested the keeper from about 20 metres out.

In the 66th minute, their efforts were rewarded when the former SuperSport United midfielder Tsabedze’s magnificent ball into the box was turned home by Mkhontfo to double their lead.

With 20 minutes remaining on the clock, Swaziland caught Lesotho on the break again, however, Nxumalo directed his shot wide of Phasumane’s goals. In retaliation, Lesotho attacked through the middle with Ts’oanelo Koetle, who shot over the bar.

In the dying minutes, Mkhontfo was denied his brace by the post as his low shot from the left crashed against the upright and went away to safety with Phakusame well beaten.

With the three points in the bag, Isihlangu could be looking forward to beating Madagascar and decide who tops the group when they clash on Friday.

Swaziland out to thrash Lesotho

Known as Isihlangu Somnikati, Swaziland will be in action in their second 2015 Cosafa Cup match against Likuena of Lesotho on Wednesday night.

The Swazis are fresh from a victory against the Taifa Stars of Tanzania on Monday as they opened their account by a slender 1-0 victory.

A solitary strike by Sfiso Mabila sealed the victory for the Swazis and that has definitely boosted their morale ahead of the second tie versus the side from the mountainous kingdom.

Coached by Haris Bulunga, Swaziland will be targeting a victory and could not afford to lose two matches in a row with the quarter-final place still up for grabs.

Their best finish in the regional showpiece was when they finished in the semi-finals in 2003 after losing to Zambia and will look to better that run.

Experienced campaigners such as Tony Tsabedze, Machawe Dlamini and Mabila will be expected to be in good shape come match day for Bulunga’s side to claim a victory.

To Likuena, the match is seen as a cup final hence their desire to claim a place in the knockout stages. Seephephe Matete’s side are under pressure to grab a win and erase their previous 2-1 loss at the hands of Madagascar on Monday.

Likuena’s Thapelo Tale, Nkau Lerotholi and Thabo Masualle are some of the players that coach Matete will rely on to change their fortunes in an aim to stun the Swazis.

Likuena finished as runners-up in the Southern African tournament in 2000 after losing to Zimbabwe at home and away by 3-0.

Their match against Isihlangu is scheduled to kick-off at 19:30 and the venue is the Royal Bafokeng Stadium.