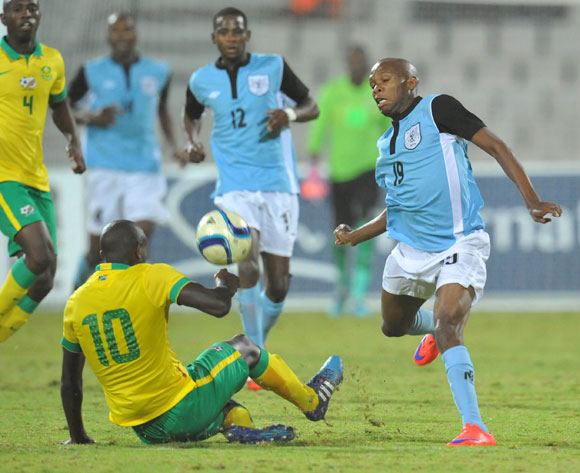 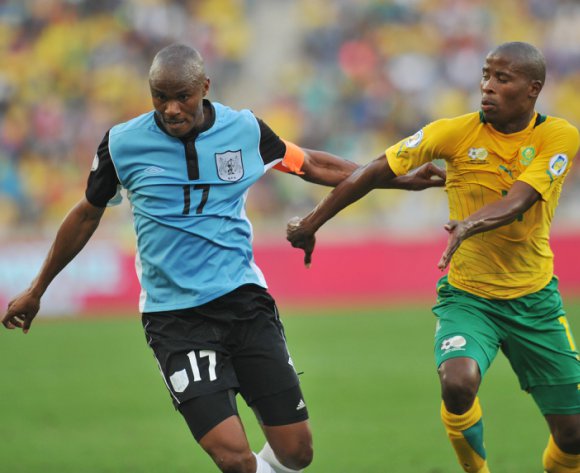 Welcome to the live play-by-play for the 2015 Cosafa Cup match between South Africa and Botswana at Royal Bafokeng Stadium.

Teams are out on the park. Captains have spoken out against Xenophobia. Signing of the anthems to follow.
This is both Bafana and Botswana's opening game of the tournament. Both teams enter the tournament at this stage.
In the early kick-off Namibia beat defending champions Zambia on penalties to book their place in the final four.
1' The match is underway!
2' And we have kick-off. Fans continue to stream in at the Moruleng Stadium.
2' Bafana in yellow in green attacking the goal to the right. Botswana in their traditional blue, white and black playing from right to left.
3' Early corner-kick for South Africa punched to safety by Dambe.
5' Both teams feeling each other out in the opening exchanges.
6' Nato clips the ball over Bafana's defensive line, but there is no one making a run and its an easy clean-up for Daniels.
8' Koobake breaks down the left before firing in a cross, but Bafana are up to the task and break through Morena.
9' 'Sox' gets the fans on their feet, corner-kick for Bafana.
10' Dambe with another good save, this time his is well positioned to punch from Lark's head.
12' Best chances coming from set-pieces thus far, nothing to write home about just yet.
14' Great skill by 'Sox' on the far side has the crowd on their feat, timely interception by Ncenga denies what would've been an open header for Morena.
17' Mabokgwane has had nothing to do in the early exchanges. The hosts with all the early possession and territory.
20' Long stoppage in play as Dambe receives some treatment to his leg. Butler giving his players some advice as they take up some water.
23' Good work in defence to guide the ball out for a goal-kick as Nhlapo charges down the right flank.
25' Free-kick for Botswana following a foul on Kgaswane from van Heerden.
27' Mabokgwane clears the ball up into the air before Kebatho latches his powerful effort high and wide. Botswana's first shot in anger.
30' Dambe again punches clear from a van Heerden free-kick. The Platinum Stars man goes down, receiving treatment for the umpteenth time.
33' Dambe is finally on his feet. Long throw in comes to nothing as Morena commits a foul inside the area.
36' Bafana finding it difficult to break down Botswana's defence and a wayward through ball is swallowed up by Dambe who looks to have recovered from the knock he received from Daniels.
40' And we are into the final five minutes of what has been a rather stale opening 45 minutes.
41' CLOSE! Brilliant ball across the face of goal by Van Heerden but somehow the ball evades both Bhengu and Morena!!!
45' Free-kick by Van Heerden over hit and Dambe comes out to gather with ease.
45' Two minutes added to the first-half.
45 + 1' The second half is underway
45 + 3' CLOSE! Botswana's best chance of the half falls to Kgaswane on the cusp of half-time, his rasping effort tipped around the post by Mabokgwane.
45 + 4' The referee brings the first half to an end.

48' Early corner-kick for Bafana Bafana. Van Heerden swings it in and Sangweni heads wide at the far post.
50' Good start to the second half by Bafana Bafana who will be eager for a goal to settle some nerves.
51' Free-kick for Botswana - Kgaswane steps up but sends his left-footed effort straight at the wall.
52' CLOSE! Bafana break through Morena and win a corner-kick - Van Heerden swings it in and Nato provides an important clearing header with Daniles lurking.
55' Another break in play as Ncenga receives some treatment after taking a blow to the head. He looks to be okay.
58' Long throw in by Van Heerden cleared by Botswana who for the time being find themselves pegged in their own half.
60' Dambe has been superb when called upon from corner-kicks, punching from safety once again as Bafana grow increasingly frustrated.
62' Botswana: Joel Mogorosi replaces Lemponye Tshireletso

66' Dambe does well to keep out a swinging Van Heerden free-kick with a diving save.
68' Another corner-kick for Van Heerden comes to nothing as Bafana continue to boss the game.
70' Into the final 20 minutes and Shakes Mashaba has yet to make a change. Remember this game will go straight to penalties if we don't have a winner after 90 minutes.
73' Quick turn and shot from Nhlapo who's curling effort flashes wide of Dambe's right-hand post.
75' Bhengu and Mogorosi send speculative efforts wide of goal as we enter the final 15.
76' South Africa: Mduduzi Nyanda replaces Phumelele Bhengu

89' Mogorosi pull back almost finds a teammate who would've had a tap in!
90' Three minutes added.
90 + 3' Botswana denied a penalty as Hendrick Moyo takes a tumble. Looked a spot-kick, but the referee says no.
90 + 4' The referee blows the whistle for Full Time.

Welcome to the live play-by-play for the 2015 Cosafa Cup match between South Africa and Botswana at Royal Bafokeng Stadium.

Botswana have knocked Bafana Bafana out of the Cosafa Cup being hosted in Rustenburg thanks to a 7-6 penalty shootout win after a goalless draw.

The Zebras nowjoin Namibia, who beat defending champions Zambia in the first quarterfinal, in the final four.

As early as the tenth minute of the match Bafana Bafana's Siyabonga Nhlapho delivered a great shot, which gave Botswana goalkeeper Kabelo Dambe some work to do.

Just five minutes before the end of the first half, National First Division leading goal scorer Phumelele Bhengu failed to connect with the ball inside the box which could have given Bafana a lead from Marc van Heerden’s cross.

In the second half Marc Van Heerden supplied another cross to Bhengu but this time he tipped it over the cross bar.

Peter Butler's Zebras were denied an opportunity to settle the game in the 90 as the referee waved away claims of a penalty-kick after Hendrick Moyo went down inside the area following a challenge from Nhlapo.

In the dying minutes Botswana missed a chance to grab a late winner as Kebatho failed to connect with a low cross from the right.

This saw the match going to penalties where Carl Lark missed the first penalty for Bafana. But Bafana made a comeback when Jackson Mabokgwane saved Hendrick Moyo’s penalty.

Then it was Kwanda Mngonyama’s penalty that hit the woodwork which saw Botswana clinching victory.

South Africa and Botswana will renew their rivalry when the teams meet in the Cosafa Cup quarterfinals on Sunday, May 24, kick-off at 17:00 CAT.

With both teams having been exempt from the group stage of the competition and drawn directly into the knockout rounds, they are expected to bring their ‘A game’ with a semifinal place on the line.

Bafana Bafana have warmed up for the encounter with practice matches against Lesotho and University of Johannesburg, and they are expected to have a final wrap-up of their preparations with a game against Malawi on Friday.

Coach Shakes Mashaba has had to deal with three injury-enforced withdrawals from his squad, with Cole Alexander, Athenkosi Dlala and Puleng Tlolane all forced to pull out. Mduduzi Nyanda, Tlou Segolela and Lebogang Manyama have been called as replacements.

Botswana come into the match under something of a cloud, as their FA fired their national U-23 coach Keitumetse Paul on Wednesday for alleged misconduct.

Paul was also assistant to senior team head coach Peter Butler and was complaining that several U-23 players should have been removed from the Cosafa Cup squad and given to his junior team for their Africa U-23 Championship qualifier against Zambia.

The Zebras team will have a familiar look to it, as far as South African fans are concerned, with the likes of PSL-based Joel Mogorosi, Mogakolodi Ngele and Kabelo Dambe in their ranks.

Bafana goalkeeper Jackson Mabokgwane says South Africa will focus on their own strengths and not worry about the threat posed by Botswana.

"For me to say it’s a full-strength or non-full-strength SA team would not be fair, because all players are selected for the national team on merit and no player owns a jersey," he said.

"Coming into the tournament, we don’t know too much about Botswana. We’ve just been concerned about ourselves, overcoming the injury challenges in our camp, and making sure we gel as quickly as we can."

South Africa and Botswana have met in eight official matches according to FIFA statistics, with the Zebras having never claimed an outright win over their neighbours.

However, they famously eliminated Bafana Bafana from the 2006 Cosafa Cup when they claimed a 5-4 penalty shootout victory.

The teams’ most recent meeting was an emphatic 4-1 win for South Africa in the qualifiers for the 2014 World Cup.