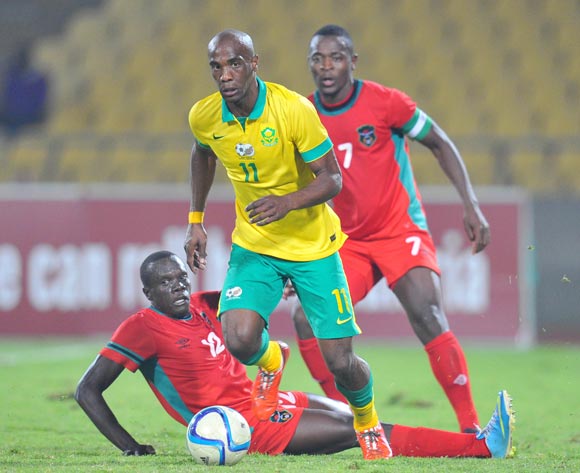 Carl Lark of South Africa tackled by Chimango Kayira of Malawi during the 2015 Cosafa Cup Plate Semi Finals match between South Africa and Malawi at Royal Bafokeng Stadium, Rustenburg on the 27 May 2015 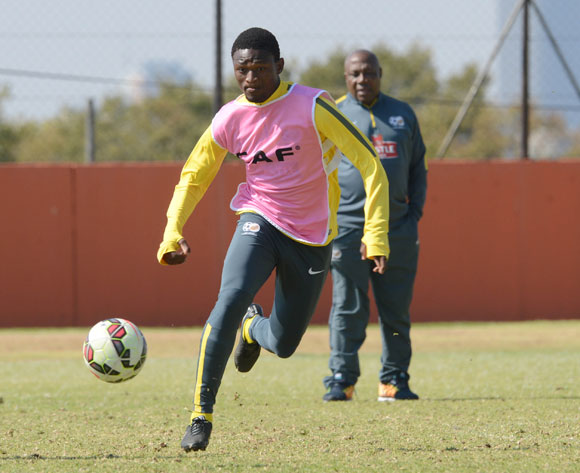 Welcome to the live play-by-play for the 2015 Cosafa Cup match between South Africa and Malawi at Royal Bafokeng Stadium.

1' The match is underway!
2' Brilliant save by Harawa to deny Bafana Bafana an early goal. Madisha forcing the Flames keeper into a fine save from a Van Heerden free-kick.
5' Harawa punches clear Van Heerden's corner-kick. Early pressure by the hosts.
10' The South African gloves man hasn't seen any action as yet with Bafana pegging Malawi in their own half in the opening exchanges.
15' Bafana Bafana have nothing to show for their early pressure just yet with Harawa enjoying a solid to the game.
17' Break in play as a Malawi player receives some treatment.
20' Van Heerden the main protagonist once again - this time picking out Carl Lark with a pin-point cross, the Santos man sends his header well over.
23' Segolela flashes his volley attempt wide of goal.
27' Malawi with their first shot in anger and it's an easy save for Mabokgwane.
28' Harawa again quick off his line to clear from danger! Enjoying a good start to the gym is the Malawi stopper.
29' Corner-kick for Bafana Bafana and you guessed it... Harawa is there to clear!
30' Harawa with an easy save to deny Motupa as we reach the half-hour.
34' Frustrated with his teammates efforts van heerden charges forward and sends a shot with his weaker right foot well wide.
36' Malawi: Zicco Mkanda replaces Muhammad Sulumba

46' The second half is underway
49' Early chance for Malawi who again shoot straight at Mabokgwane.
53' Physical start to the second-half with the referee stopping the game to allow the medics to attend to their respective players on a couple of occasions already.
57' Malawi enjoy a good spell of possession but South Africa's defence holds firm.
60' Harawa and Motupa now receiving some treatment as we enter the hour mark.
60' South Africa: Hendrick Ekstein replaces Gift Matupa

65' Van Heerden looks to be in some pain, but he is up and is okay to continue.
68' Manyama goes down in the area but the referee waves away any claims for a spot-kick.
70' Nyanda's shot is straight at Harawa who makes a good save.
72' A rare corner-kick for Malawi and Mabokgwane is fouled, free-kick to South Africa.
75' Nyanda hits the side-netting after the ball fell to his feet inside the area.
77' Harawa up to the task once again to clear from danger from a South African corner-kick.
79' Malawi: Frank Banda replaces Gerald Phiri Jnr

87' Heading into the final three minutes, looks like we will be heading for yet another penalty shoot-out
90' Three minutes added.
90 + 4' The referee blows the whistle for Full Time.

Welcome to the live play-by-play for the 2015 Cosafa Cup match between South Africa and Malawi at Royal Bafokeng Stadium.

Malawi through to Plate final

Malawi booked their place in the Cosafa Cup plate final with a 5-4 penalty shoot-out win over South Africa at the Royal Bafokeng Stadium on Wednesday.

Siyabonga Nhlapo missed the decisive spot-kick for the hosts who suffered heartbreak from 12 yards for the second time in four days.

Bafana Bafana were defeated 7-6 on penalties by Botswana in the Cup quarterfinals.

The Flames will face Zambia in Friday's plate final.

Malawi gloves man McDonald Harawa enjoyed an encouraging start to the game, denying Motjeka Madisha the opener within two minutes with a great save.

The Flames stopper got down well to his left to deny the Bafana Bafana midfielder from a Marc van Heerden free-kick.

Harawa continued to shine in goal for Malawi - getting to every ball played into the area by the South African wide men.

Van Heerden continued where he left off in the defeat to Botswana picking out Carl Lark with a precise cross, the Santos man though could only succeed in heading his attempt well wide with 20 minutes on the clock.

The AmaZulu fullback looked to take matters into his own hands, but saw his right-footed attempt fly harmlessly wide of Harawa's left-hand upright just after the half-hour.

Chances were few and far between for the remainder of the game with either side managing a mere three shots on goal apiece.

In the end Bafana Bafana missed an opportunity to go within one kick of booking their place in the plate final after Jackson Mabokgwane denied Miclam Mhone.

Cosafa Cup hosts South Africa will aim for a consolation win in the Plate section of the tournament when they tackle Malawi in the second semifinal.

The teams will meet at the Royal Bafokeng Stadium on Wednesday evening, kick-off at 19h30.

Bafana Bafana had high hopes of winning their fourth Cosafa Cup, but those dreams were shattered on Sunday evening when they drew 0-0 with Botswana and suffered a subsequent 7-6 penalty shootout defeat.

Malawi, meanwhile, were also beaten on penalties in their quarterfinal. They drew 2-2 with the Mambas of Mozambique before going down 5-4 in the shootout.

Bafana and the Flames have met in 10 official international matches according to FIFA records. South Africa have eight wins compared to just one for Malawi.

The teams’ most recent meeting was a 2012 friendly in Durban which Bafana Bafana won 3-1.

The winners will face either Ghana or Zambia in the Plate final on Friday.