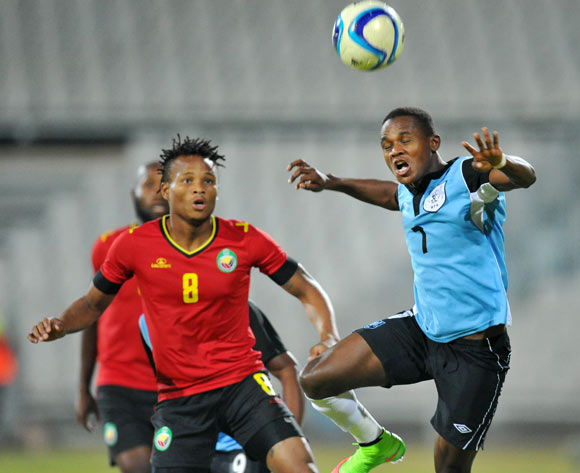 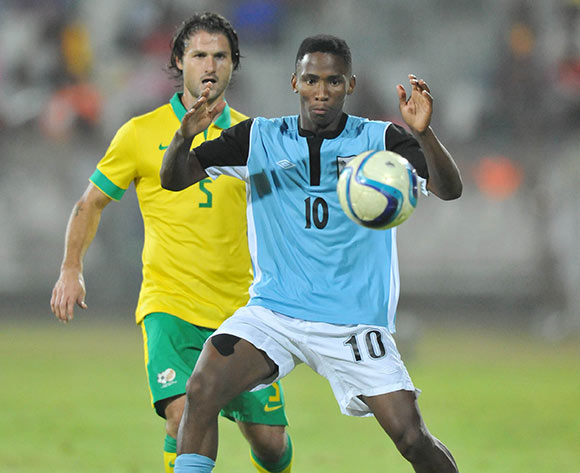 Mpho Kgaswane of Botswana challenged by Marc Van Heerden of South Africa during the 2015 Cosafa Cup Quarter Final match between South Africa v Botswana at Moruleng Stadium, Rustenburg on the 25 May 2015 ©Muzi Ntombela/BackpagePix

Welcome to the live play-by-play for the 2015 Cosafa Cup match between Botswana and Mozambique at Moruleng Stadium.

1' The match is underway!
2' Botswana play in light and dark blue, while Mozambique wear red and black.
4' Both teams still trying to settle into the match, though it's the Mambas who look more dangerous early on.
6' Some promising passing through midfield from the Zebras, but they're yet to really get at their opponent's defence.
8' Botswana will need to make best of their opportunities when they arise, and be aware of the threat of Mozambique on the break.
10' The first genuine chance of the game goes the way of Mozambique, with Isac getting in behind the defence, but his pull-back from the by-line is behind Diogo.
13' A set piece chance for Botswana, but the ball into the box is easily cleared by the Mambas defence.
15' A snap shot from the edge of the box by Boy... goalkeeper Machava makes a fine save to keep the scores level!
18' Dambe forced into a good save low at his near post from Diogo's right-wing free kick, before Guambe follows up from a tight angle and can only hit the outside of the upright.
21' Boy suffers a stamp from Hagi - not sure whether it was deliberate or not - but he's okay to continue after some treatment.
23' Midway through the first half, still goalless here at Moruleng Stadium between Botswana and Mozambique.
24' Isac looks for a left-footed curler beyond the right-hand of goalkeeper Dambe, but it flashes wide of the far post!
26' Some frantic, end-to-end play and Isac almost sends Diogo clean through on goal.
29' There are some big challenges going in from both sides now, there's no time on the ball in midfield...
31' It's been a frustrating half hour for the likes of Boy and Bebatho, who have seen little of the ball.
35' Ten minutes to half time, still goalless and chances few and far between for these teams.
36' Luis with a long-range effort, but he's off target. The Mambas haven't quite found their range just yet...
38' Dambe reads the play well and collects a dangerous diagonal that would have put Diogo in on goal.
41' Mozambique appeal for a free kick right on the edge of the area after a challenge on Cremildo, but the referee waves play on.
44' The Mambas attacking trio of Diogo, Luis and Isac look particularly dangerous...
45' Luis with a low cross, Diogo shoots on target... great save from Dambe! The keeper reacts brilliantly to tip the ball over the bar!
45 + 2' Edmilson Gabriel Dove (Mozambique) is cautioned.

46' The second half is underway
47' No changes from either team at the start of the second half.
48' Kebatho with an imaginative overhead effort that is not far off target... classy play from the Botswana striker.
51' Isac with a quick control and shot from a few metres outside the box, but it's well wide of the target.
53' Botswana: Joel Mogorosi replaces Kabelo Seakanyeng

56' Mozambique on the attack, Diogo completely misses a shot, while Isac is brought down in the box but the referee ignores their appeals for a penalty.
57' Dambe mis-times a run off his line and is almost caught out by Isac, but there's a defender well placed to clear the danger!
60' An hour played, still goalless as these teams battle for a place in the Cosafa Cup final.
62' Mozambique: Luis Melville Parkim replaces Alberto Diogo

64' Heart in mouth moment for Dambe as he slices an attempted clearance from a back-pass and it's out for a corner...
65' Botswana: Hendrick Moyo replaces Segolame Boy

66' The diminutive Isac gets in between two big defenders and scores with a glancing header from the corner kick! Botswana 0-1 Mozambique.
67' Luis Jose Miquissone (Mozambique) is cautioned.

69' Mozambique threaten another goal through Celso from a free kick, but he's penalised for a push in the back of a Botswana defender.
72' Mogorosi with a shot-cross from the right angle and Machava makes a good save to keep his side ahead!
74' Just over a quarter hour remaining... can the Zebras pull this back and keep alive their hopes of a first Cosafa Cup final?
77' Free kick to Botswana in a useful attacking position... they need to make the most of their set pieces now.
78' Omaatla Kebatho (Botswana) scores!

79' The Zebras do make the most of the set piece! the goalkeeper spills the initial effort, the ball is recycled into the box and Kebatho scores with a cracking low shot into the corner! Botswana 1-1 Mozambique.
81' Parkim with a great chance to shoot for Mozambique, but he's flagged offside in a very tight decision.
83' Nato wins a header from a Zebras corner kick, but the ball is safely into the hands of the goalkeeper.
84' Katlego Koobake (Botswana) is cautioned.

86' A break in play now while Dambe received treatment for a knock he picked up in defending a set piece.
87' Mogorosi crosses from the right to the near post, Moyo gets a shot away but it's off target!
89' Luis Melville Parkim (Mozambique) scores!

90' Isac with a floated cross from the left, Parkim arrives ahead of a ball-watching Koobake and chests home what is surely the winner for the Mambas! Botswana 1-2 Mozambique.
90 + 1' There will be three minutes of added time.
90 + 3' The referee blows the whistle for Full Time.

Welcome to the live play-by-play for the 2015 Cosafa Cup match between Botswana and Mozambique at Moruleng Stadium.

Botswana’s dreams of a maiden Cosafa Cup final appearance were dashed on Thursday night when they lost 2-1 to Mozambique in the second semifinal at Moruleng Stadium.

A last-minute goal by Mambas substitute Luis Parkim proved decisive when the teams were locked at 1-1 after earlier strikes from Isac Decarvalho and Omaatla Kebatho. Mozambique will now face Namibia in the tournament final on Saturday afternoon.

Mozambique created the first opening of the game in the 10th minute, with Isac Decarvalho sprinting free of the defence down the right flank, but his pull-back from the by-line was behind Alberto Diogo in the danger area.

Botswana responded with the first shot on target, arriving five minutes later. The skilful Segolame Boy made space on the edge of the penalty area and got a snap shot away, but goalkeeper Cesar Machava dived low to his left to make a fine save.

Botswana goalkeeper Kabelo Dambe was almost caught out by a free kick from wide on Mozambique’s right flank by Diogo in the 18th minute, while Isac sent a left-footed curler just wide of the target at the midway point of the first half.

Chances were harder to come by in the remainder of the first 45 minutes, though Mozambique almost broke the deadlock just before the break. Diogo turned Luis Miquissone’s low cross on target, but Dambe made a superb save to tip the ball over the crossbar.

The second half’s first highlight was an ambitious overhead kick from Botswana striker Omaatla Kebatho, while Botswana had a couple of heart-in-mouth moments in defence as the Mambas began to turn up the heat in attack.

In the 65th minute Mozambique claimed the lead, with the diminutive attacker Isac Decarvalho getting in between two big Zebras defenders to score with a glancing header at the near post from a corner kick.

The Zebras equalised in the 78th minute. A shot from a free kick was spilled by Machava, the ball was recycled into the box and Kebatho fired home a low, left-footed shot to make it 1-1 and seemingly put his side back in with a chance of qualifying for the final.

However, Botswana’s dreams were dashed in the final minute of regulation time when a floated cross from the left flank by Isac allowed Luis Parkim to sneak in ahead of a ball-watching Katlego Koobake and chest home the winner.

Botswana will be aiming to reach their first Cosafa Cup final when they take on Mozambique in the second semifinal on Thursday. Kick-off at the Moruleng Stadium will be at 19h30.

Botswana made waves in the tournament’s quarterfinals when they held hosts South Africa to a goalless draw before claiming a 7-6 penalty shootout victory to move into the semifinals.

It is the Zebras’ third appearance in the semis of the regional tournament, having also reached the last four in 2006 and 2007. They will hope it is third time lucky as far as their hopes of claiming a maiden place in the final is concerned.

As for Mozambique, they also had to go via the route of penalties to secure their semifinal berth. An entertaining 2-2 draw with Malawi was followed by a 5-4 shootout victory for the Mambas.

Mozambique are returning to the semifinals for the fourth time in the last five editions of the tournament, though only once did they do enough to reach the final: in 2008 they edged Madagascar in the semis before falling to South Africa in the championship-deciding match.

The teams have met in 15 official international matches according to FIFA records. The Mambas have claimed nine wins compared to just three for the Zebras.

Their most recent meeting was just two months ago – a friendly in Lobatse saw Mozambique claim a 2-1 victory.

The winners will face either Namibia or Madagascar in the Cosafa Cup final on Saturday.