General view of the Cosafa Trophy 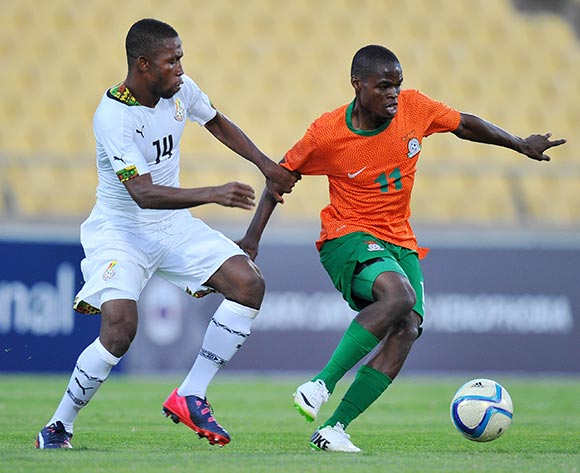 The Malawi 'Flames' have beaten Zambia 1-0 to earn the 2015 Cosafa Cup Plate title in what has been a fantastic tournament for them.

After half an hour, Mukuka Mulenga glanced his header just wide as Malawi survived a scare.

Inside the final ten minutes of the half, Allan Mukuka’s shot was blocked as Malawi held firm to take the game into the half time break.

A few minutes into the second half, Malawi's Tizgobele Kumwenda missed a header after a cross from John Banda on the right. And moments later Allan Mukuka's shot hit the side netting.

Then on the 59th minute Zicco Mkanda but Malawi ahead after a mistake by Zambia keeper Kennedy Mweene.

But six minutes later, Malawi’s captain Lucky Malata was sent off after getting a second yellow card for a foul on Jackson Mwanza.

Another red card followed when Zambia’s Donashano Malama got a second yellow for fouling Frank Banda wide on the left as the game became an even more fierce contest.

Zambia came close to a leveller in the 88th minute when Munthali headed wide from a corner kick. But Malawi held on during the final minutes to claim a fantastic result.

Zambia and Malawi will look to end the 2015 Cosafa Cup on a high by winning the Plate final when they meet at Royal Bafokeng Stadium on Friday, kick-off at 15h30.

Zambia earned their place in the Plate final thanks to an impressive 3-0 win over Ghana in the semifinals on Thursday.

Bornwell Mwape, Aaron Ketebe and Nathan Sinkala all scored in the first half to see Chipolopolo to victory over the Black Stars.

Malawi, meanwhile, held hosts South Africa to a goalless draw before a 5-4 win on penalties to advance to the final.

Zambia, the outgoing Cosafa champions, will see the Plate as little more than a consolation prize and still be frustrated by their penalty shootout defeat to Namibia in the quarterfinals of the main Cup competition.

Chipolopolo and the Flames have been regular combatants down the years according to FIFA’s statistics. In 63 matches between the teams, Zambia have 34 wins compared to 15 for the Flames.

They last met in the Cosafa Cup in the semifinals of the 2006 edition: Zambia won 3-1 en-route to claiming their third regional championship title.