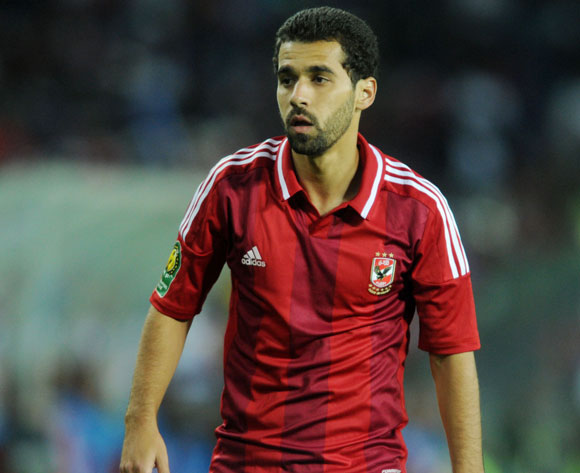 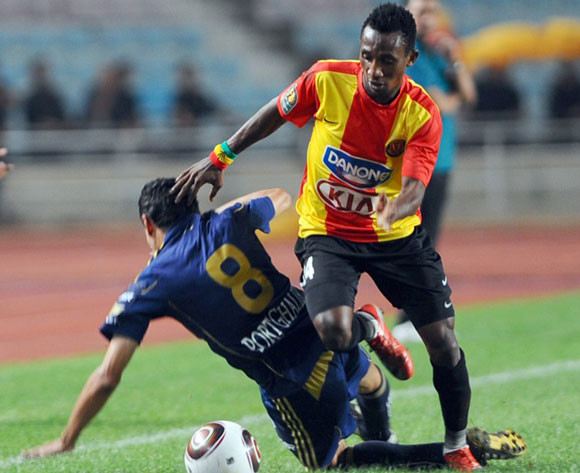 Harrison Afful and Esperance are resuming rivalry with Al Ahly

Al Ahly thrashed Espérance Tunis 3-0 in Suez on Sunday night, in their Group A opener of the 2015 Confederation Cup.

A brace from in-form attacking midfielder Abdallah El-Saied either side of half time and a late goal from substitute Moemen Zakareya earn the Egyptian giants the three points against their rivals.

While the Tunisians dominated the opening 15 minutes of the encounter, with Nigerian striker Emem Eduok causing many problems to the Red Devils’ defence, Ahly took the lead in the 20th minute through El-Saied following a poor clearance from Espérance centre-back Arbi Jabeur.

Walid Soliman came close to sending the locals into the break with a wider advantage, missing the target from the edge of the box, but El-Saied completed his brace just before the hour mark after some good work from Hossam Ghaly.

And despite defensive midfielder Hossam Ashour being sent off with twenty minutes remaining for an off-the-ball challenge, Ahly kept going forward with Walid Soliman and substitute Moemen Zakareya missing some clear opportunities.

However, the latter ultimately found the target on the stroke of full time to add to the visitors’ misery, just after Eduok nearly pulled a goal back for Espérance.

Ahly are now top of their Group A, ahead of Etoile Sportive du Sahel who managed a narrow 1-0 win over Stade Malien in Sousse on Friday evening.

Al Ahly will host Espérance Tunis in a battle of titans in Suez on Sunday, in their Group A opener of the 2015 CAF Confederation Cup.

Title holders Ahly will be looking to retain their crown in Africa’s second-tier club competition, after sealing their place in the last eight against Club Africain on penalties following their disappointing second round exit in the CAF Champions League.

About to lose their Egyptian Premier League crown to arch-enemies Zamalek, who are nine points clear at the top of the table with five more games to go, the ‘Red Devils’ have, however, enjoyed a fine run of domestic form lately with a 2-1 win over Petrojet as their latest result.

“We won against a big team that have a lot of talented players. The victory is important ahead of the Esperance test,” Ahly coach Fathi Mabrouk told the media on Tuesday.

“We will do our best to prepare well for the Esperance match. The return of our injured players will also be a key factor to get a positive result,” he added, boosted by the return from injury of left-back Hussein El-Sayed, attacking midfielder Mahmoud Hassan ‘Trezeguet’ and forwards Emad Meteb and Amr Gamal.

And while they remain wary of their prestigious opponents, the eight-time African champions are determined to go all out against the Tunisians and secure the three points to get their campaign off to a good start.

“The game against Esperance is not going to be a walkover. The Tunisians are a very good team and we can’t afford any unforced errors against them. We have to attack from the first whistle to the very end. A win at the group stage start is very vital for us,” Mabrouk warned.

Espérance Tunis also failed to reach the Group stage of the CAF Champions League, falling to Al Merreikh on away goals, before extending their continental journey with a 5-1 aggregate thrashing of Hearts of Oak in the Confed Cup playoffs.

The ‘Blood and Gold’ will travel to Suez under the technical leadership of former Olympique Marseille coach José Anigo, who replaced Portuguese manager José Morais at the helm of the Tunisians following a disappointing third-place finish in the domestic league.

The two sides have met on 12 occasions in Africa’s foremost club tournament since their first clash in the round of 16 of the 1990 African Cup of Champions Clubs, recording three victories each and playing out six draws.

But their last encounter saw the Egyptians claim their seventh title in the competition, with a 3-2 aggregate win over the Tunisians in the final of the 2012 campaign, and Espérance have never defeated Ahly on Egyptian soil.

The game will kick off at Suez Army Stadium at 22h00 CAT on Sunday 28 June.