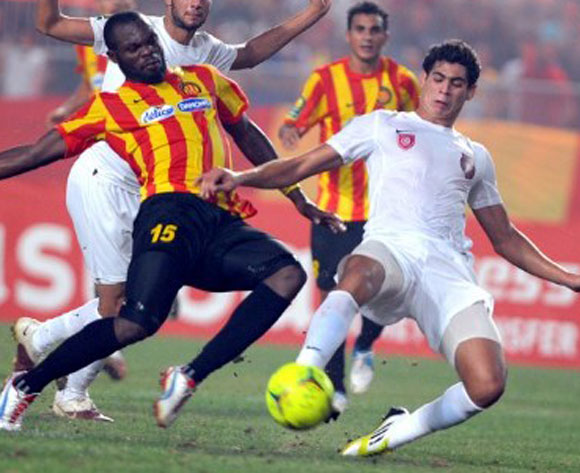 Etoile clinched the derby against Esperance 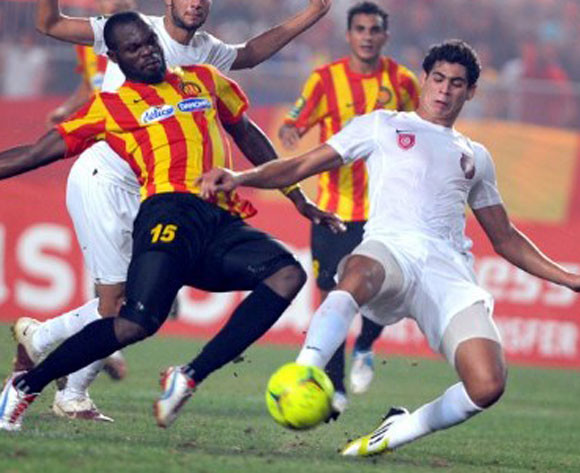 A second-half goal by Ammar Jemmal was enough to hand Etoile du Sahel the deserved victory over rivals Esperance de Tunis in their 2015 CAF Confederation Cup Group A clash on Saturday night at Stade de Rades.

The victory elevates Etoile to the group’s pole position with six points whilst Esperance occupy the third spot with no point next to their name.

Although it was Etoile who threatened first as early as the fourth minute, goalkeeper Ben Cherifia denied Beigui’s effort with a fine save.

The visitors tried to move forward, but Alaya Brigui and Franck Kom lacked precision in front of goal with the latter wasting some more first half chances as the visitors remained on the front foot.

After 30 minutes of play, Etoile were reduced to 10 men when their Brazilian forward Diogo Da Silva was sent off after being handed a straight red card and the remaining 15 minutes could not produce a goal with both sides heading to the tunnel deadlocked at 0-0.

But just after five minutes into the second stanza, Etoile found the back of the net through Ammar Jemal handing the visitors the lead with a successful header.

Esperance came knocking at Etoile’s posts looking for an equaliser but keeper Aymen Mathlouthi was in fine form to make a save in front of Houcine Ragued.

The hosts tried all they could to salvage a point but it was Etoile whose defence was solid and emerged as victors.

Tunisian archenemies Espérance de Tunis and Etoile Sportive du Sahel will renew their heated rivalry in Radès on Saturday, in a 2015 Confederation Cup Group A clash.

Espérance will be looking to bounce back in front of their home crowd after suffering a humiliating 3-0 defeat to Al Ahly on Egyptian soil in their campaign opener, while Etoile will try to keep their African momentum going following a 1-0 home win over Stade Malien.

However, midfielder Marouane Tej will be missing out on the trip after suffering an injury against Stade Malien.

But the two-time African champions have also lost many key players, including Ghana international full-back Harrison Afful, playmaker Oussama Darragi and striker Ahmed Akaichi, while newcomers Sokari and Diarra are not eligible for the rest of the campaign.

The two Tunisian heavyweights know each other perfectly well after decades of domestic battles, as well as eight previous continental encounters.

Last season in the national league, the ‘Blood and Gold’ enjoyed a 1-0 home win over Etoile before drawing 1-1 in Sousse in the reverse fixture.