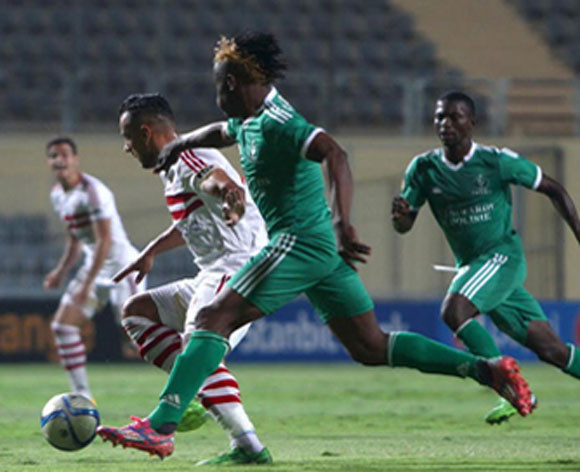 AC Leopards vs Zamalek in Dolisie

AC Leopards vs Zamalek in Dolisie

A solitary strike by Tresor Mukendi for AC Leopards was enough to hand the Congolese side the three points when they beat Zamalek 1-0 at the Stade de Municipal in Dolisie on Sunday afternoon.

Although they remain positioned at number three with four points, the win could make a difference for the hosts as they managed to keep their semi-final hopes alive.

Although the hosts showed hunger among the two sides, they managed to create chances, but a clear-cut opportunity for the Congolese was wasted when Abou-Gabal made the save for the White Knights in the first half.

Zamalek’s coach Jesualdo Ferreira tried to bring in some fresh legs in his quest for an equaliser. Mohamed Ibrahim came in for Gaber and Gomaa came in for Mostafa Fathi, but his charges failed to ignite.

Despite the loss, the White Knights still top the group as they have nine points from four matches, but the loss could be seen as a slip up.

Ferrerira’s men will now have to dig deep in search of a victory and keep their semi-final hopes alive. Their next fixture is against Tunisia’s CS Sfaxien on August 23 who are still licking their wounds after their 2-0 loss against South Africa’s Orlando Pirates.

Zamalek set to finish the job in Dolisie in Confed Cup

Zamalek will be looking to seal their spot in the last four of the Confederation Cup when they visit AC Léopards in Dolisie on Sunday, in matchday four of the competition in Group B.

The White Knights have enjoyed a perfect record so far in their continental campaign, topping their group on maximum points halfway through the mini league following three consecutive wins over CS Sfaxien, Orlando Pirates and their Congolese opponents of the day, whom they defeated 2-0 in Cairo in the reverse fixture.

Zamalek will be in high spirits coming into the game, after putting an end to an 11-year domestic drought by claiming their first Egyptian Super League crown since 2004.

And while coach Jesualdo Ferreira will not be able to rely on the suspended trio of Ayman Hefni, Ibrahim Salah and Ahmed Tawfik for the game, he has welcomed several additions to his continental squad, including Egypt U-23 star Mahmoud ‘Kahraba’ Abdel-Moneim and attacking pair Mohamed Salem and Ahmed Hassan Mekki.

A win in Dolisie will see the Egyptians book their place for the semifinals of the tournament with two more matches to go, while a draw will also prove enough should CS Sfaxien fail to collect the three points against Orlando Pirates in South Africa.

Meanwhile, the Congolese will be desperate to add to their tally and keep their chances of a last-four spot alive, after securing just a single point from their first three outings.

The match will kick off at Stade Denis Sassou-Nguesso at 16h30 CAT on Sunday 9 August 2015.