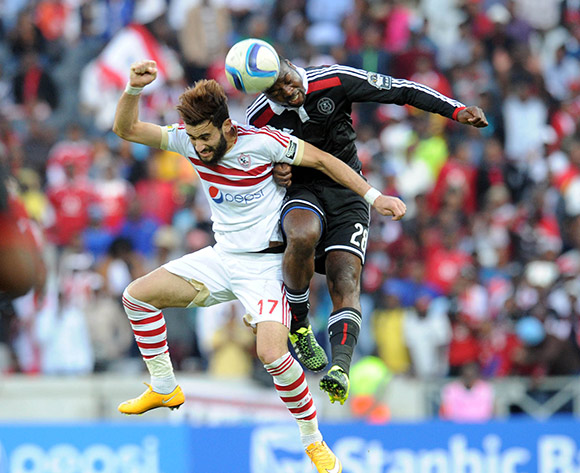 Egyptian giants Zamalek and South Africa’s Orlando Pirates will battle for top spot in Group B of the CAF Confederation Cup when they meet at the Petro Sport Stadium in Cairo on Sunday night, kick-off at 20h30 CAT.

The Buccaneers and the White Knights have both already secured progression into the semifinals of the continental competition, but this final group stage match is far from a dead rubber.

With the teams locked at 12 points apiece at the top of the log, a first-place finish – and with a theoretically more favourable semifinal – is up for grabs.

Heading into the game, Zamalek are placed above Bucs thanks to the 2-1 win they claimed in the teams’ first Group B meeting at the Mbombela Stadium back in July. This means that Pirates must win in Cairo if they are to claim top spot – a draw will not be enough.

Bucs coach Eric Tinkler has spoken of his desire to finish at the top of the group, which will ensure that his team has the advantage of hosting the second leg of the semifinal tie.

“I think we’re all looking forward to the challenge of playing against a very good team such as Zamalek,” said Tinkler.

“Obviously we would like to try and reverse the result that we had against them at home in Mbombela.

“We would like to finish top of the group, and I think that would be a fantastic achievement,” he added.

“The players know the importance of trying to win the group, because obviously we would like to find ourselves in the semifinal stage playing away from home first and then getting the second leg at home.

“It’s been quite good for us, if we look at our trajectory to where we are now then [you’ll find] that’s what happened in the majority of the games, we first played away and then we played at home and it bore great results for us.”

Meanwhile, Zamalek coach Jesualdo Ferreira has called on Egyptian football authorities to lift the spectator ban that has been in place in the country for over three years.

"No one has any idea of the passion in Egypt, but we play without fans' attendance and the passion remains," Ferreira told Portuguese newspaper Maisfutebol. "However, there can be no football without fans. They have to solve this problem.”

An official ban was issued by the Egyptian government following the Port Said stadium massacre in February 2012, when 74 fans attending a domestic match were killed.

The ban was lifted briefly in February this year, but the first fan-attended game ended violently and 19 Zamalek fans were killed outside the Air Defence Stadium. All football activities in Egypt have since been played behind closed doors.

Rwandan referee Hudu Munyemana will take charge of the game in Cairo on Sunday night. The teams will next be in action in the Confederation Cup when the first leg of the semifinals is held on the weekend of 25-27 October.