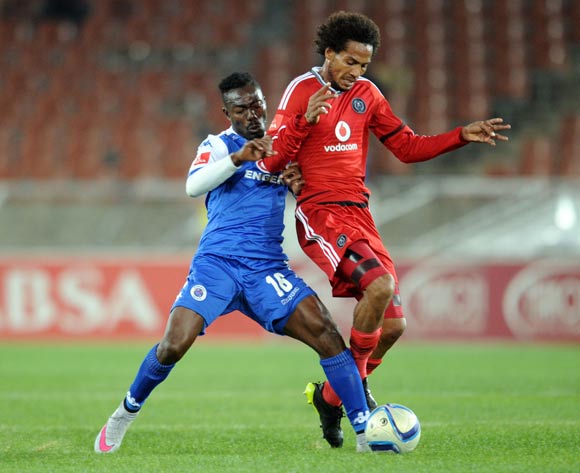 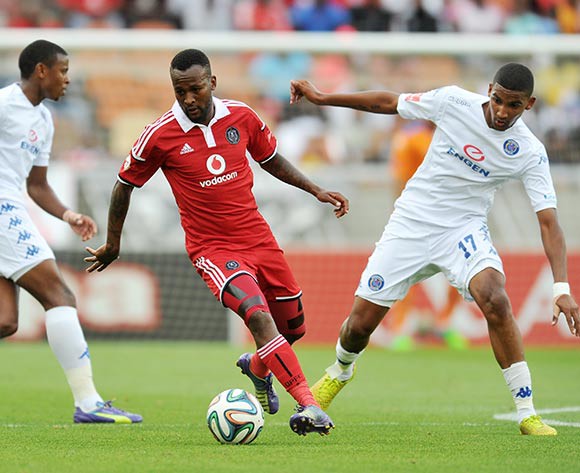 Welcome to the live play-by-play for the ABSA Premiership 2015/16 match between SuperSport Utd and Orlando Pirates at Peter Mokaba Stadium.

The final game of the opening weekend of fixtures is about to kick-off in Polokwane with SuperSport United hosting Orlando Pirates.
The two side's clashed on this ground on a few occasions last season with Brockie notable netting a stunning goal in a Nedbank Cup clash at this stadium last season.
New look defence for SuperSport once again this evening with Boxall at right-back - Farmer partners Bongani Khumalo, the youngster making his competitive debut for the club.
Eric Tinkler has stuck with most of the side that beat CS Sfaxien on Saturday with Tendai Ndoro the only change, he makes his league debut for the club.
1' The match is underway!
2' Early corner-kick for Pirates comes to nothing. The Bucaneers playing in red this evening, they are attacking the goal to the right in the first stanza. SuperSport, the home side, are in blue playing from right to left.
4' CHANCE! Rakahle blazes Sibusiso Khumalo before picking out Masuku who tees up Ndoro, the Zimbabwean hits his first time effort over Williams crossbar.
7' Myeni skins Boxall on the far side, Pirates fans on their feet. Positve start by the visitors who have seen all the ball thus far.
10' Corner-kick for SuperSport cleared by Pirates who launch the counter, Williams quick off his line to clear from danger.
11' Wome fouled by Sarr in the middle of the park, SuperSport take it quickly, but it's wasted with Pirates winning a goal-kick.
12' Good cover defending by Farmer to stifle Ndoro following a mistake by Boxall.
15' Ball sits up well for Brockie who has a swing at it, his attempt is a poor one and Phala almost keeps the ball in play! In the end it's a goal-kick for Pirates.
18' Corner-kick for SuperSport played in by Mathebula, ball cleared for another corner.
19' SAVE! Good save by Mhlongo to keep out Boxall's header, the might have struggled in defence, but he sure is a threat come set-piece time.
21' CHANCE! Another chance for Ndoro who sends his header attempt over, just failed to time his leap.
22' Michael Boxall (SuperSport Utd) scores!

23' He offered them a warning shot and now he has scored! Mathebula with the free-kick, Boxall with the one touch finish.
26' Having struggled to contain Pirates in the opening exchanges, SuperSport have settled and are now looking to double their lead.
30' Half-hour played in Polokwane with SuperSport holding a 1-0 lead. Pirates have see 60% of the ball, but yet to capatilize.
33' Farmer has been superb thus far while Cernak has worked hard in defence for SuperSport.
35' Pirates corner-kick causes some chaos in the SuperSport bix, but the hosts do enough to clear from danger.
38' SuperSport Utd: Michael Morton replaces David Mathebula

40' Pirates seeing lots of the ball, but have yet to test Williams in the SuperSport goal which is something of a concern for Eric Tinkler as we head into the final few minutes of the half.
44' Rakhale again does Khumalo, before cutting the ball in field, his ball though is a poor one and bounces of Masuku for a goal-kick.
45' Three minutes added.
45 + 3' Late free-kick well gathered by Williams as we head into the break.
45 + 4' The referee brings the first half to an end.

46' The second half is underway
48' Positive start to the half by SuperSport United who will be eager to double their lead knowing what happened in a league fixture between the two side's last season... which ended in a 2-1 win for Pirates.
49' Ball is in the back of the net, but Cernak won't be getting his goal on debut as Wome is flagged for offiside.
51' CHANCE! Boxall and Brockie link up well, but the burly forward is denied by Jele's face, the Pirates defender takes one for the team.
55' Kermit Erasmus warming up for Pirates, looks like will be coming up against his former employers.
56' Orlando Pirates: Kermit Erasmus replaces Tendai Ndoro

58' Great ball played in by Rakhale, but Manyisa is unable to control as Williams reacts quickly to gather.
61' Mhlongo receiving some treatment following a clash with Cernak. The Pirates keeper came off his line to gather a free-kick which lead to the clash.
62' Break in play as the lights die on us. Loadshedding kicking in.
62' The game is suspended, as we continue to wait for the lights to warm up. Will be back shortly...
62' Game has officially been postponed, game will continue at 62 minutes in the next 48 hours. New date and time yet to be confirmed.
63' Orlando Pirates: Felipe Ovono replaces Brighton Mhlongo

63' And the game has finally resumed!
66' Pirates dominating the opening exchanges of day 2, with Eric Tinkler throwing on Majoro before the start of play today. SuperSport leading 1-0 thanks to Boxall's goal on debut.
68' Good defending by Sangweni as Brockie looks to break following a Farmer clearance. Pirates seeing all the ball.
69' Issa Sarr (Orlando Pirates) is cautioned.

72' Free-kick for Pirates following a foul by Boxall on Masuku, Wome going into the book for decent.
73' Dove Wome (SuperSport Utd) is cautioned.

74' CHANCE! Erasmus bursts into the area, before firing at goal, Williams up to the task.
78' Pirates continue to dominate possession with SuperSport happy to sit back and defend their lead.
79' Pirates corner-kick as Myeni's strike takes a deflection.
80' BRAVE! Great block by Morton as Manyisa lets fly from range.
82' SuperSport Utd: Luvolwethu Mpeta replaces Isaka Aongor Cernak-Okanya

86' Brockie gets up well to head at goal, but his effort was never going to trouble Ovono who makes an easy save.
89' CLOSE! Myeni sends his free-kick attempt from the edge of the area just over.
90' Three minutes added.
90 + 1' Erasmus free-kick finds Jele who's header is straight at Williams. Phala forces Ovono into a save at the other end.
90 + 3' SAVE AFTER SAVE BY WILLIAMS! First to deny Erasmus then Masuku.
90 + 4' Oupa Manyisa (Orlando Pirates) is cautioned.

Welcome to the live play-by-play for the ABSA Premiership 2015/16 match between SuperSport Utd and Orlando Pirates at Peter Mokaba Stadium.

SuperSport successfully navigated through a lengthy break in play to register a 1-0 win over Orlando Pirates in their Absa Premiership opener at the Peter Mokaba Stadium.

The game was originally scheduled to finish on Tuesday evening, but floodlight failure caused the match to be postponed to Wednesday midday.

Michael Boxall's first half strike proved to be the difference between the two sides over two days, with Ronwen Williams forced into a string of late saves to deny the visitors a point.

Still on a high following their positive result in the CAF Confederation Cup on the weekend, Pirates controlled the opening exchanges with SuperSport struggling to get a foot on the ball.

Having received his work permit in the lead up to the game, Eric Tinkler started with Tendai Ndoro in attack and the striker had an early chance to open his Pirates account with four minutes on the clock.

Good work by Thabo Rakhale and Menzi Masuku opened up space for Ndoro, who sent his first-time effort well wide of Williams’ goal.

Boxall forced Brighton Mhlongo into a great save with in the 19th minute, but the Pirates goalkeeper could do nothing to deny the New Zealand international his goal on debut three minutes later.

The SuperSport right-back lost his marker before meeting David Mathebula's precise free-kick on the volley to open the scoring.

Pirates continued to dominate possession, but were unable to convert their dominance into chances, with Ronwen Williams untested in the first stanza.

The visitors were fired up at the resumption on play on Wednesday, with Tinkler encouraging his troops to surge up field as SuperSport sat back in an attempt to hold onto their narrow lead.

The Sea Robbers had chance after chance to level matters in the dying exchanges with Masuku, Sifiso Myeni, Kermit Erasmus and Happy Jele causing anxious moments for the SuperSport faithful.

Former SuperSport striker Erasmus had the best chance to square things up in second-half stoppage time, but former teammate Williams was up to the task as Matsatsantsa successfully held on to record a famous win.

United, Pirates complete round one

SuperSport United and Orlando Pirates will complete the first round of matches in the 2015/16 Absa Premiership when they meet at the Thohoyandou Stadium. The fixture is set for Tuesday, 11 August 2015, kick-off at 19h30.

The Tshwane side recorded two wins, two draws and two losses in their last six matches of the previous campaign, encapsulating their inconsistency.

Pirates ended the previous in fourth place, having claimed 50 points from 30 matches.

The Soweto side lost just one of their last 17 league matches of the campaign, having suffered five defeats in their opening 13 fixtures.

In head-to-head stats, SuperSport and Pirates have met in 48 league matches since 1990.

The Buccaneers have 22 wins compared to 15 for Matsatsantsa, while 11 matches have been drawn.

SuperSport have won nine of their 24 home matches against Pirates, suffering 10 defeats in the process.

Last season Bucs did a league ‘double’ over their Tshwane counterparts, winning 2-1 away and 4-1 at home.

Just one of the teams’ last 10 league matches has ended in a draw.