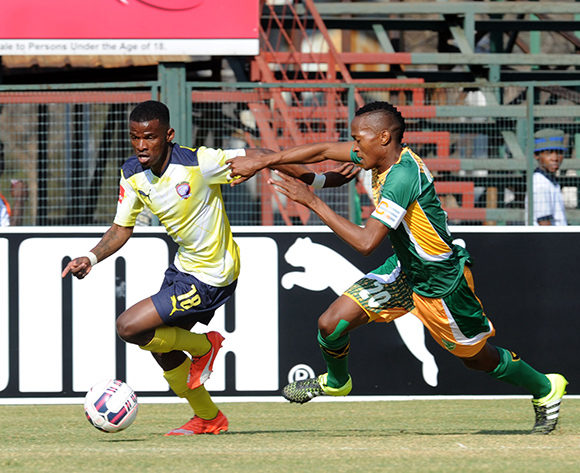 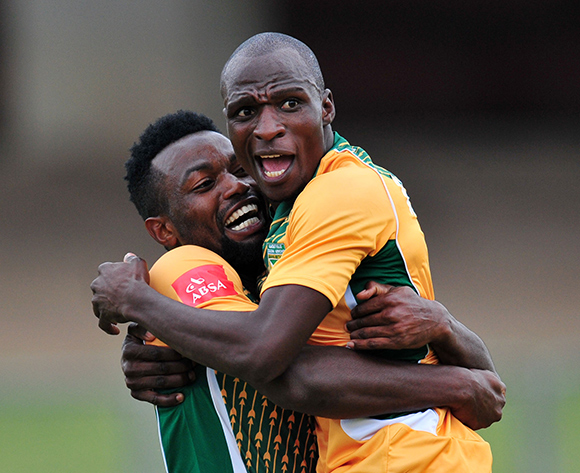 Rodney Ramagalela of Golden Arrows celebrates his goal with Mwape Musonda during the Absa Premiership 2015/16 match between Golden Arrows and University of Pretoria at Chatsworth Stadium in Chatsworth, South Africa on August 09, 2015 ©Muzi Ntombela/BackpagePix

Welcome to the live play-by-play for the ABSA Premiership 2015/16 match between Jomo Cosmos and Golden Arrows at Olen Park.

Welcome to the live play-by-play for the ABSA Premiership 2015/16 match between Jomo Cosmos and Golden Arrows at Olen Park.

Jomo Cosmos collected their second point in the Absa Premiership as they played to a goalless draw against Golden Arrows at Olen Park on Sunday afternoon.

Jomo Cosmos’s goalkeeper Sherwyn Naicker made a great save off Nkanyiso Cele’s shot early on in the match and he continued to be well positioned throughout.

Khanyeza’s shot missed the target in the 28 minute, hitting the side net on the left.

In the 40th minute Zulu wasted a great opportunity of giving his side the lead as he was all alone inside the box, but shot wide.

Zikalala also made a great save just towards the end of the first half tipping away a cross that was delivered by Cosmos.

In the second half, Naicker continued with his form as he made a good save once again denying Arrows a lead.

In the 60th minute Arrows pushed forward in attack, but Mngomezulu made a clearance with a header.

Nine minutes later Zulu came close to finding the back of a net for Cosmos with a volley inside the box, but his shot missed the target.

Both the teams tried to find the break with Cosmos attacking more, but the match finally ended in a goalless draw which saw the two teams sharing a point each.

Jomo Cosmos and Golden Arrows will resume their rivalry in the top flight for the first time since 2011/12 when they meet in an Absa Premiership match on 23 August 2015. Kick-off at Olen Park will be at 15h00 CAT.

Cosmos opened their 2015/16 league campaign with a goalless draw away to Maritzburg United on August 10.

Ezenkosi are placed seventh on the Absa Premiership log with one point from one match.

Arrows opened their 2015/16 league campaign with a 1-0 home win over University of Pretoria on August 9.

Abafana Bes’thende are placed fourth on the Absa Premiership log with three points from one match.

In head-to-head stats, Cosmos and Arrows have met in 20 top flight league matches since 2000/01.

Abafana Bes’thende have dominated the rivalry, claiming 12 wins compared to two for Ezenkosi, while six matches have been drawn.

Both of Cosmos’ two wins against Arrows have come at home, with the most recent being in the 2003/04 season.

In the National First Division last season, Arrows took four points off Cosmos with a goalless draw in the first half of the campaign followed by a 3-1 win in KwaZulu-Natal in the return game.