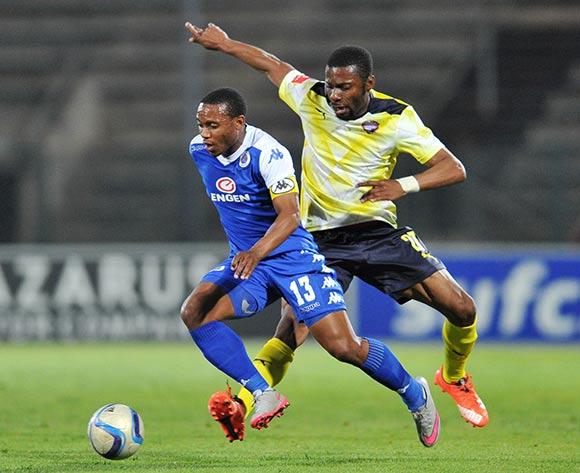 Thuso Phala of Supersport United challenged by Brice Aka of Jomo Cosmos during the Absa Premiership match between SuperSport United and Jomo Cosmos at the Lucas Moripe Stadium in Pretoria, South Africa on August 26, 2015 ©Samuel Shivambu/BackpagePix 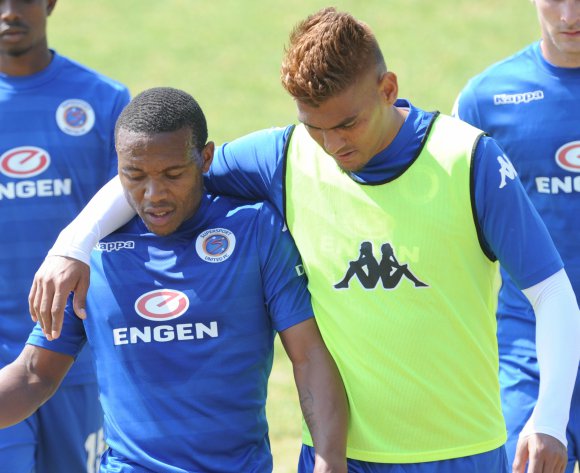 Welcome to the live play-by-play for the ABSA Premiership 2015/16 match between SuperSport Utd and Jomo Cosmos at Lucas Moripe Stadium.

Welcome to the live play-by-play for the ABSA Premiership 2015/16 match between SuperSport Utd and Jomo Cosmos at Lucas Moripe Stadium.

Jomo Cosmos played to their third successive goalless draw when they frustrated SuperSport United in an Absa Premiership encounter at the Lucas Moripe Stadium on Wednesday evening.

Ezenkosi parked the bus for the full 90, but their night was almost spoiled in the dying embers of the game, with Sherwyn Naicker pulling off a world class save to deny Jeremy Brockie a goal and Matsatsantsa all three points.

SuperSport applied all the early pressure, with the visitors camping in their own half from the onset.

As a result it was up to Matsatsantsa to find a way past the Cosmos wall. Michael Boxall saw his attempt wide before Thuso Phala, still searching for his first goal since taking over the captain’s armband, scuffed a shot from the edge of the area on 12 minutes.

Despite their defensive approach, Cosmos would register the first shot on target through Tebogo Makobela. The attacker guided his header attempt straight into Ronwen Williams’ hands.

SuperSport have caused teams problems from set-pieces this season and were presented a chance to open the scoring after Naicker failed to hold onto Thuso Phala's cross. The ball fell to Isaka Cernak, but the Australian slipped at the point of impact - to the relief of the Cosmos gloves-man.

Kingston Nkhatha squandered a golden chance to open the scoring in the 34th minute - with the goal at his mercy and teammates around him, the Zimbabwean shot wide from close range.

Nkhatha was eager to make up for the miss and went close to redeeming himself on the cusp of halftime, his turn and shot troubling the side netting.

SuperSport continued to dominate possession after the interval, but Cosmos had their chances on the counter with Pentjie Zulu and Makobela shooting wide of Williams’ goal.

In a desperate attempt to break the deadlock, Gordon Igesund introduced Bradley Grobler and Phumelele Bhengu in quick succession.

Dean Furman clipped the ball over the Cosmos defensive line before Boxall squared to his New Zealand teammate, who looked sure to score, but somehow Naicker managed to divert the ball over the crossbar from point-blank range.

United out to keep up strong start

SuperSport United will look to continue their strong start to the Absa Premiership season when they host Jomo Cosmos at Lucas Moripe Stadium on 26 August 2015, kick-off at 19h30.

SuperSport played to a 1-1 draw away to Black Aces on August 22 in their most recent result.

The Tshwane side’s last home game was a 1-0 win over Orlando Pirates in the first round of the season.

Matsatsantsa are placed fourth on the Absa Premiership log with four points from two matches.

Cosmos played to a second successive goalless draw when they held Golden Arrows at home on August 23.

The Vaal-based club opened their campaign with a stalemate at home to Maritzburg United.

Ezenkosi are placed 12th on the Absa Premiership log with two points from as many matches.

In head-to-head stats, SuperSport and Cosmos have met in 35 league matches since 1991.

Ezenkosi have 13 wins compared to eight for Matsatsantsa, while 14 matches have been drawn.

SuperSport have won three of their 18 home matches against Cosmos, suffering seven defeats in the process.

The teams last met in the league in the 2011/12 season and played to a 2-2 draw in Ezenkosi’s home match and a goalless stalemate in Matsatsantsa’s home match.