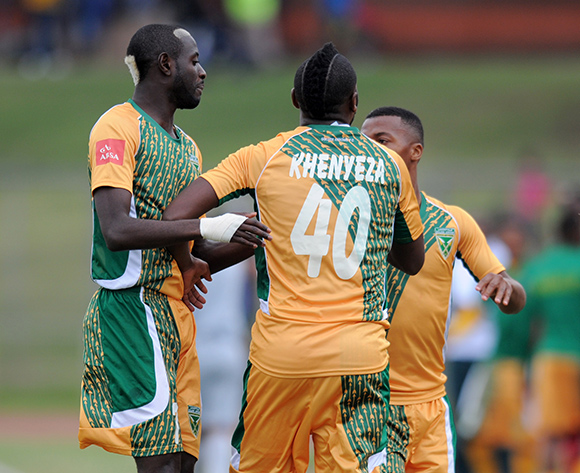 Mabhudi Khenyeza of Golden Arrows celebrates his goal with teammates during the Absa Premiership 2015/16 match between Golden Arrows and Mamelodi Sundowns at Chatsworth Stadium, Chatsworth on the 12 September 2015 ©Muzi Ntombela/BackpagePix 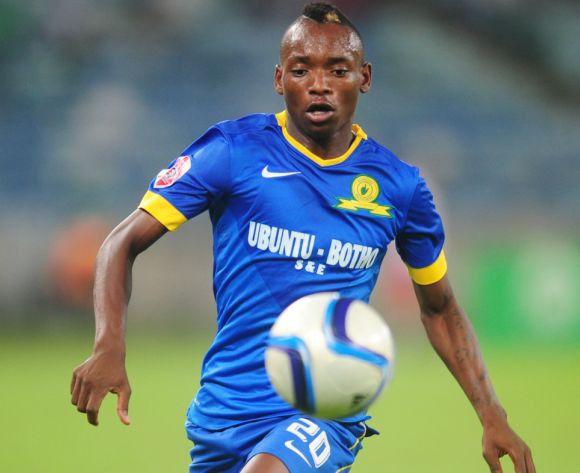 Welcome to the live play-by-play for the ABSA Premiership 2015/16 match between Golden Arrows and Mamelodi Sundowns at Chatsworth Stadium.

1' The match is underway!
6' Dennis Onyango (Mamelodi Sundowns) is cautioned.

Welcome to the live play-by-play for the ABSA Premiership 2015/16 match between Golden Arrows and Mamelodi Sundowns at Chatsworth Stadium.

Golden Arrows handed Mamelodi Sundowns their second defeat of the season as they beat the Brazilians 2-1 in their Absa Premiership encounter at the Chatsworth Stadium on Saturday.

It was Mabhuti Khanyeza who gave the homes side a lead through a penalty in the fifth minute after goalkeeper Onyango had committed a foul inside the box.

In the eight minute Zikalala made a double save denying Billiat an equalizer as Mamelodi Sundowns started to attack.

As if that wasn't enough as Sundowns were trying to search for an equalizer, but Bongani Zungu received his second yellow card which saw him leaving the field and the visitors chasing with ten men.

In the 45th minute Onyago denied Shitolo an opportunity to double the score before the half time as he made a good save to his right.

This saw Arrows going into a half time break with a 1-0 lead.

In the second half, Zwane proved to be a super sub as he had come in for Malajila giving the Brazilians an equalizer with his right foot finish, 1-1.

Substitute Ryan Chapman, who had come in for Fikizolo, almost scored with his first touch as well, but his long strike went over the crossbar.

After all the hard work Chapman was rewarded as he scored Arrows' second goal with a great finish in the 70th minute, 2-1.

In the last ten minutes Arendse came close to finding an equalizer but his header went wide.

Billiat and substitute Fiston Abduol Razak tried to push for an equalizer, but the Arrows defence was solid and this saw the Durban outfit retaining their winning ways.

Arrows, ‘Downs both look to bounce back

Golden Arrows and Mamelodi Sundowns will both look to bounce back from defeats in their last Absa Premiership outings when they meet at Chatsworth Stadium on 12 September 2015, kick-off at 15h00.

Arrows suffered their first defeat of the season when they were beaten 2-0 by Platinum Stars on August 26.

The Durban side’s only home match this season was a 1-0 win over University of Pretoria on the opening weekend.

Abafana Bes’thende are placed 10th on the Absa Premiership log with four points from three matches.

Sundowns suffered their first defeat of the season when they were beaten 1-0 by Black Aces on August 25.

The Tshwane side’s two away matches this season have seen them claim just one point.

The Brazilians are placed eighth on the Absa Premiership log with four points from three matches.

In head-to-head stats, Arrows and Sundowns have met in 28 league matches since 2000/01.

The Brazilians have 13 wins compared to eight for Abafana Bes’thende, while seven matches have been draw.

Arrows have won six of their 14 home matches against Sundowns, suffering six defeats in the process.

Arrows have won just one of the teams’ last nine league matches.