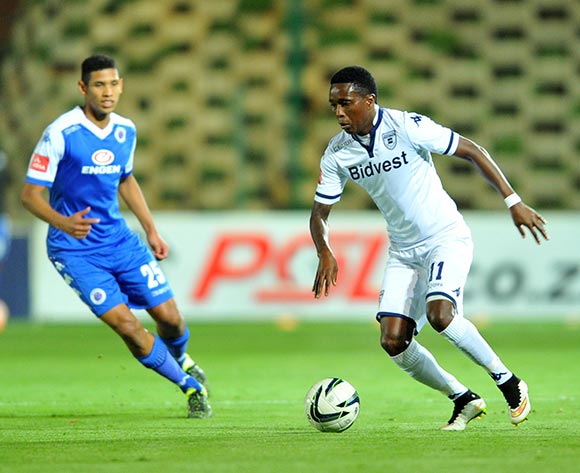 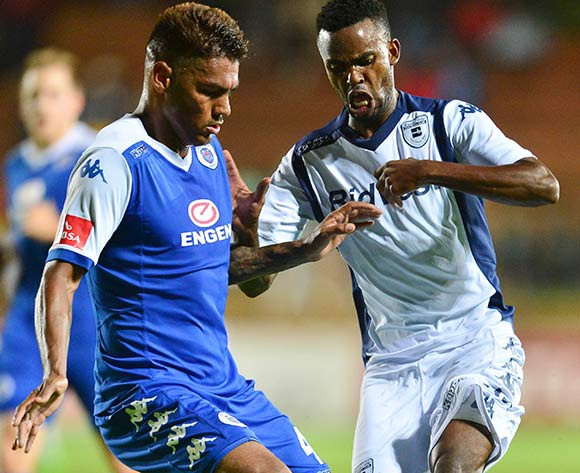 Clayton Daniels of Supersport and Jabulani Shongwe of Bidvest Wits during the Absa Premiership Football match between Bidvest Wits and Supersport United at the Bidvest Stadium in Johannesburg on December 17, 2014 ©Barry Aldworth/BackpagePix

Welcome to the live play-by-play for the ABSA Premiership 2015/16 match between Bidvest Wits and SuperSport Utd at Bidvest Stadium.

1' The match is underway!
12' Papy Faty (Bidvest Wits) is cautioned.

Welcome to the live play-by-play for the ABSA Premiership 2015/16 match between Bidvest Wits and SuperSport Utd at Bidvest Stadium.

Bidvest Wits played the entire second-half with 10-men, but successfully held on to secure a narrow 1-0 win over Absa Premiership title rivals SuperSport United at Bidvest Stadium on Tuesday evening.

Jabulani Shongwe scored the only goal of the game before Henrico Botes was sent for an early shower on the cusp of half-time.

Despite their man disadvantage, the Clever Boys continued to create the better chances and were deserved winners on the night.

Discounting Papy Faty's early attempt there nothing to write home about in the early exchanges, with the most exciting moment of play an off-the-ball scuffle which resulted in Michael Boxall and the Burundi international seeing yellow.

While possession was equally shared between the two sides, Wits looked the more dangerous and Daine Klate was unlucky to lose his footing, having found space inside the area following a quick counter in the 19th minute.

SuperSport were finding it hard to find a way past a stubborn Clever Boys defence, with Moeneeb Josephs untested in the opening half-hour.

At the other end Thulani Hlatshwayo forced Ronwen Williams into an easy save in the 37th minute with the defender failing to conjure any power on the ball having found a pocket of space inside the area.

Bidvest Wits, though, would be rewarded soon after with Shongwe opening the scoring on the night with 41 minutes on the clock.

The Bafana Bafana midfielder has been keeping Sibusiso Vilakazi on the bench and having scored in the 1-0 win over AmaTuks, he showed the confidence of a man in-form - charging into the area before stepping past Bongani Khumalo and curling the ball into the back of the net.

Having seen his side take the lead Gavin Hunt would've had his team talk worked out, but the former Matsatsantsa coach had to change his speech heading into the tunnel as Botes was sent off following a second bookable offence.

Desperate times call for desperate measures - eager not to lose two games in succession against fellow title contenders, Gordon Igesund introduced both Kingston Nkhatha in quick succession as he searched for the equaliser.

Still SuperSport struggled to create chances with Thuso Phala seeing his shot in the 71st minute fly just over before a superb bit of defending by Markus Lecki denied Jeremy Brockie a shot at goal with four minutes of regulation time remaining.

The ball fell favourably for the New Zealand international inside the area, but the young defender was aware of the danger, to clear at Brockie's shoelaces.

The win moves Bidvest Wits top of the standings with four wins from five matches.

Bidvest Wits will look to continue their good form in the Absa Premiership when they host SuperSport United at Bidvest Stadium on 22 September 2015, kick-off at 19h30.

Wits claimed their third win of the season when they defeated University of Pretoria 1-0 away on September 13.

The Johannesburg side has claimed two wins from their two home matches so far this season.

The Clever Boys are placed second on the Absa Premiership log with nine points from four matches.

SuperSport suffered their first defeat of the season when they lost 4-1 at home to Kaizer Chiefs on September 12.

The Tshwane side played to a 1-1 draw at Black Aces in their only away match of the season thus far.

Matsatsantsa are placed eighth on the Absa Premiership log with five points from four matches.

In head-to-head stats, Wits and SuperSport have met in 46 league matches since 1990.

Each side has claimed 14 wins, while 18 matches have been drawn. Even in terms of goals scored there is little to separate the teams, with United having scored 42 times to the Clever Boys’ 41.

Wits have won seven of their 23 home matches against SuperSport, suffering six defeats in the process.

Last season the Clever Boys did a league ‘double’ over Matsatsantsa, winning 1-0 both in Pretoria and Tshwane.

Wits are unbeaten in their last six league matches against SuperSport.