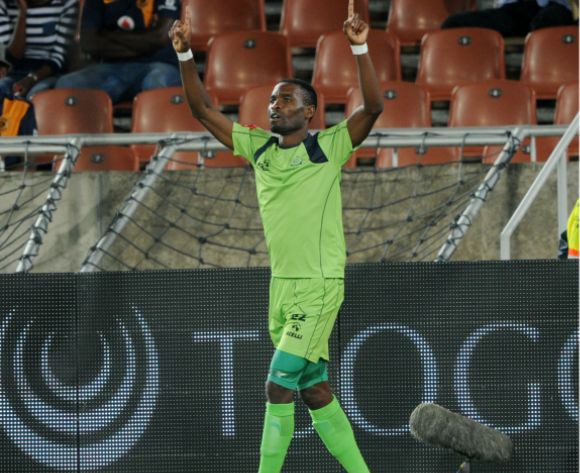 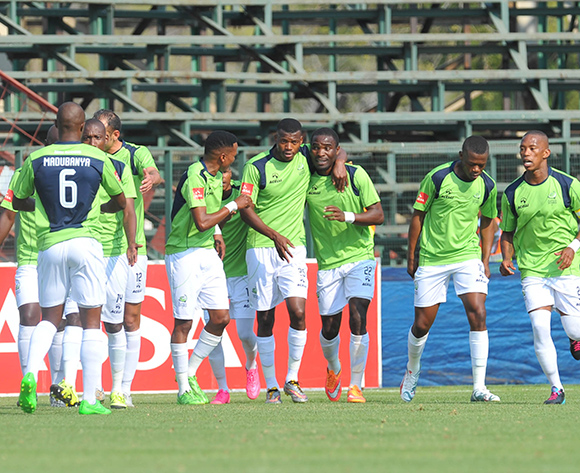 Robert Ngambi of Platinum Stars celebrates his goal with his teammates during the Absa Premiership match between Jomo Cosmos and Platinum Stars at Olen Park in Potchefstroom, South Africa on September 13, 2015 ©Samuel Shivambu/BackpagePix

Welcome to the live play-by-play for the ABSA Premiership 2015/16 match between SuperSport Utd and Platinum Stars at Lucas Moripe Stadium.

46' The second half is underway
53' Sibusiso Msomi (Platinum Stars ) scores!

Welcome to the live play-by-play for the ABSA Premiership 2015/16 match between SuperSport Utd and Platinum Stars at Lucas Moripe Stadium.

Pressure building on Igesund as SuperSport suffer another defeat

Pressure is building on Gordon Igesund as SuperSport slumped to their third successive Absa Premiership defeat, going down 3-1 to Platinum Stars at the Lucas Moripe Stadium on Saturday.

It was a happy return for Cavin Johnson, with goals from Sibusiso Msomi, Bonginkosi Ntuli and Robert Ng'ambi helping Dikwena leapfrog Bidvest Wits and into top spot on the log standings.

Jeremy Brockie scored what proved to be a mere consolation for the hosts, who could end the weekend in the relegation zone if AmaTuks and Jomo Cosmos win on Sunday.

Stars almost got off to the ideal start as a floated free-kick from the left flank found Eleazer Rodgers, who rose highest only to see his header fly wide in the opening minute of the clash.

The pair of Ntuli and Rodgers was proving to be a handful for the SuperSport defence with the latter again over powering Clayton Daniels only to see his effort wide of goal in the 22nd minute.

Rodgers and Ntuli continued to cause havoc with the pair linking up well inside the area to set-up Ng'ambi, who would've felt disappointed in himself for failing to hit the target with an acrobatic shot six minutes later.

Ng'ambi then saw his shot from inside the area straight at Ronwen Williams before Ntuli missed a gilt-edged chance with only the goalkeeper to beat.

Dove Wome almost made the burly forward pay for his mistake soon after, but Mbongeni Mzimela was up to the task to see the sides enter the break deadlocked at 0-0.

The opening goal finally came in the 53rd minute, Msomi's shot from a tight angle flying past Williams via the inside of the post.

Things went from bad to worse for hosts as Ntuli doubled Dikwena's lead seven minutes later. The on-loan Sundowns striker weaved his way past a few static defenders before providing a cool finish.

SuperSport pulled a goal back through Brockie from an acute angle in the 68th minute only for Ng'ambi to restore Stars lead following poor defending by Matsatsantsa.

Despite a few nervy moments in the final exchanges, Stars held on for a memorable win.

SuperSport United will welcome an in-form Platinum Stars for an Absa Premiership clash at Lucas Moripe Stadium on 26 September 2015, kick-off at 15h00.

SuperSport suffered a second successive defeat when they went down 1-0 away to Bidvest Wits on September 22.

The Tshwane side has claimed four points from their three home matches so far this season.

Matsatsantsa are placed 12th on the Absa Premiership log with five points from as many matches.

Stars claimed a third successive league win when they beat Chippa United 3-2 at home on September 22.

The Rustenburg side has claimed four points from two away matches so far this season.

Dikwena are placed second on the Absa Premiership log with 11 points from five matches.

In head-to-head stats, SuperSport and Stars have met in 24 league matches since 2003/04.

Matsatsantsa have 11 wins compared to six for Dikwena, while seven matches have been drawn.

SuperSport have won four of their 12 home matches against Stars, suffering four defeats in the process.

Last season United took four points off Dikwena, winning 3-1 in Tshwane before playing out a goalless draw in the return game in Rustenburg.

The teams have played to three goalless stalemates in their last nine league meetings.