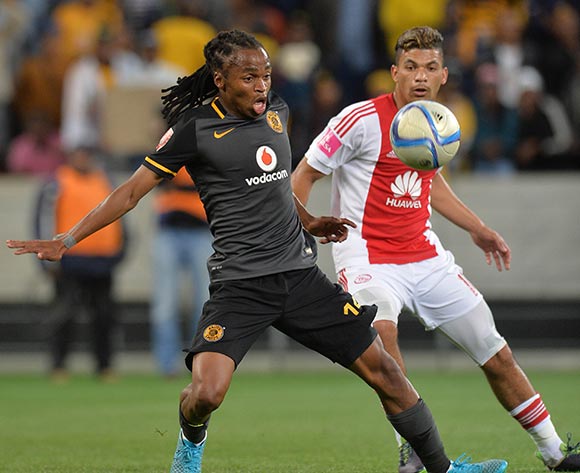 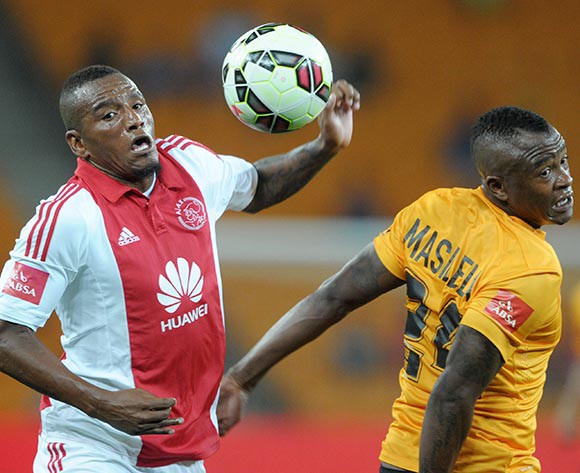 Welcome to the live play-by-play for the ABSA Premiership 2015/16 match between Ajax Cape Town and Kaizer Chiefs at Cape Town Stadium.

Good evening and welcome to the live PBP for what promises to be an exciting Absa Premiership clash between Ajax Cape Town and Kaizer Chiefs.
The two teams lock horns exactly a week after Ajax beat Chiefs in the MTN8 final.
Team news Ajax: Paulse starts, Coetzee and Norodien back in the side.
Team news Chiefs: Lebese on the bench, Xulu on the bench with Bukenya in to combat Paulse threat. Manqele and Abraw up front.
STAT: In head-to-head stats, Ajax and Chiefs have met in 32 league matches since 1999/2000. The Amakhosi have 14 wins compared to nine for the Urban Warriors, while nine matches have been drawn.
1' The match is underway!
2' Will be interesting to see how Abraw and Manqele link up this evening. A real chance for both to make a name for themselves.
5' Blistering start to the game, with both teams settling in nicely. Good crowd gathered in the Mother City.
7' Good call by the assistant as Manqele bursts through on goal, the former Chippa man clearly offside.
9' Early pressure by Chiefs who are eager to make amends for their MTN8 defeat.
10' Ajax though quick on the counter and Mzwakali draws a foul out of Bukenya. Free-kick 25 yards out.
11' Free-kick wasted by Ajax, misunderstanding between Lolo and Norodien gets De Sa of his feet.
14' Shabba slips in behind, but he is offside.
15' CHANCE AND SAVE! Great save by Jaakkola to deny Abraw from close range, after Manqele picked out the burly forward with a precise cross.
17' Hardly had time to breath, what a start to the game - end to end stuff.
20' Great movement by Masilela, and equally great pass by Shabba to pick him out, but Lolo is back quickly to clear for a corner-kick.
23' Lolo to the rescue again, this time to clear Parker's free-kick.
24' Shabba appealing for a penalty, but referee says no. Lebusa maybe a tad fortunate there.
25' Another Parker free-kick, but Jaakkola is up to the task, punching clear from danger.
29' Corner-kick for Ajax, their first of the game.
30' Losper with a miss kick before Mobara is caught offside as we reach the half-hour mark.
34' Free-kick for Chiefs following a foul by Graham. Shabba to swing it in, but again Ajax clear.
35' Norodien's cross-cum-shot flies just over Pieterse's crossbar, had the Chiefs stopper worried.
37' Pieterse with a vital touch off Paulse's head, Losper with a superb cross. Ajax picking up momentum.
40' Ajax controlling the tempo of the game heading into the final five minutes of the half.
41' Great defending by Coetzee to clear Manqele's shot from danger. Open game this, but no goals thus far.
45' Denied! what a save! Ball falls to Masilela who's left-footed shot takes a deflection, but Jaakkola is there.
45 + 3' The referee brings the first half to an end.

46' The second half is underway
47' Masilela with his weaker foot! Well wide, better he keeps to his left foot then. We have continued where we left off.
48' Penalty appeal at the other end as Paulse goes down inside the area, but referee waves away his claims.
50' First five minutes has flown by and Ajax have started the half the stronger of the two teams.
52' Note* Mobara has continued after the break, but he is in some pain, heavily bandaged wrist.
54' Referee gives Paulse a stern talking to. The big man walking a tight rope at the moment.
57' Great start to the half by Ajax, Roger de Sa's half-time team talking, tweak, working magic thus far.
60' Ivan Bukenya (Kaizer Chiefs) is cautioned.

61' Bukenya see's yellow following a foul on Norodien. Resulting free-kick cleared by the Amakhosi.
63' An injury to Losper has seen a dip in tempo with Paulse finally in the referee's book.
63' Nathan Paulse (Ajax Cape Town) is cautioned.

66' Manqele with his first goal for Chiefs! a poachers finish following good work by Yeye and Shabba.
68' Katsande is all over the place, great tackle to stop Norodien in his tracks.
69' Tsepo Masilela (Kaizer Chiefs) is cautioned.

76' Will we have a winner? What a game thus far as Lebese and Erwin Isaacs make their way on to the park, both coaches going for all three points.
81' CHANCE! Gaxa's cross finds Lebese, but the wingers shot is straight at Jaakkola.
83' Ajax Cape Town: Franklin Cale replaces Riyaad Norodien

Welcome to the live play-by-play for the ABSA Premiership 2015/16 match between Ajax Cape Town and Kaizer Chiefs at Cape Town Stadium.

Ajax come from behind to hold Chiefs

Ajax Cape Town came from behind to secure a 1-1 draw against Kaizer Chiefs in an Absa Premiership clash at Cape Town Stadium on Saturday.

Having dominated the opening 45, the Amakhosi took the lead through Edward Manqele five minutes after the hour, but the hosts hit back through the in-from Nathan Paulse as the game ended all square.

The result moves Chiefs up to fourth, Ajax remain sixth.

Eager to make amends for their MTN8 final defeat to the same opposition, Chiefs applied all the early pressure.

Head coach Steve Komphela made several changes to the side that went down to the Urban Warriors in Port Elizabeth and two of those changes, Edward Manqele and Camaldine Abraw combined for the first chance of the match on 15 minutes.

Manqele's low cross finding fellow former Free State Stars forward Abraw who would've scored were it not for a superb reflex save by Anssi Jaakkola.

The Finnish goalkeeper has been in great nick for Ajax and had to be at his best in the opening half-hour as the Amakhosi dominated proceedings.

Ajax though find their rhythm as the half grew on and Reyaad Pieterse had to be on his toes as Riyaad Norodien saw his cross-cum shot fly just over before the Chiefs stopper was forced into a smart intervention to deny Paulse a chance at goal.

Chiefs finished a end-to-end half on the front foot with Rivaldo Coetzee doing well to clear Manqele's shot at goal before Jaakkola produced a world class save to thwart Tsepo Masilela.

The opening goal of the game finally came with 65 minutes on the clock. Good work by Reneilwe Letsholonyane and Siphiwe Tshabalala set up Manqele who tapped in from close range for his first goal in the gold and black.

Ajax hit back immediately through Paulse from a Cecil Lolo corner-kick. The lanky forward rising above two Chiefs players to nod in his third goal in seven days.

George Lebese came off the bench in the 74th minute and the winger had a succession of chances to steal the win for the visitors, but on both occasions he picked out Jaakkola who was duly named man of the match.

Ajax Cape Town and Kaizer Chiefs will battle for three Absa Premiership points when the teams meet at Cape Town Stadium on 26 September 2015, kick-off at 20h15.

Ajax suffered their second defeat of the season when they were beaten 3-2 at Mamelodi Sundowns on September 23.

The Cape Town side has claimed three wins from three matches at home so far this season.

The Urban Warriors are placed fifth on the Absa Premiership log with nine points from five matches.

Chiefs played to their third draw of the season when they were held 1-1 at home by University of Pretoria on September 23.

The Soweto side has claimed five points from three away matches so far this season.

The Amakhosi are placed fourth on the Absa Premiership log with nine points from five matches.

The Amakhosi have 14 wins compared to nine for the Urban Warriors, while nine matches have been drawn.

Ajax have won seven of their 16 home matches against Chiefs, suffering four defeats in the process.

Last season the Amakhosi completed a league ‘double’ over the Urban Warriors by winning 1-0 both away and home.

The teams have not played out a draw against each other in the league since the 2008/09 season.