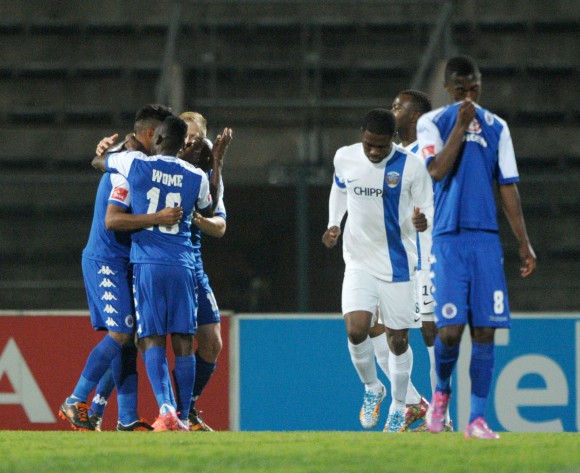 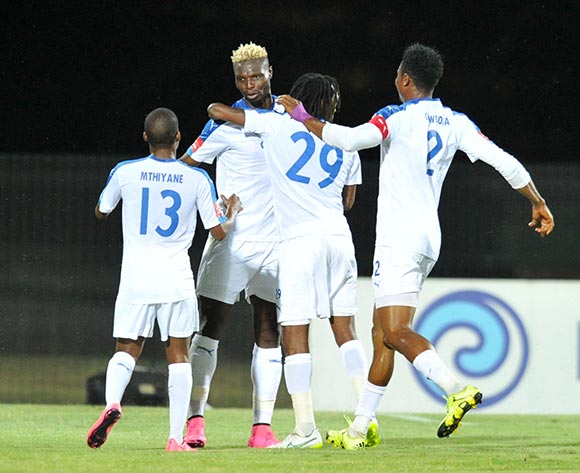 Aristide Bance of Chippa United celebrates his goal with teammates during the Absa Premiership 2015/16 match between Maritzburg United and Chippa United at Harry Gwala Stadium, Pietermaritzburg on the 21 October 2015 ©Muzi Ntombela/BackpagePix

Welcome to the live play-by-play for the ABSA Premiership 2015/16 match between Chippa United and SuperSport Utd at Nelson Mandela Bay Stadium.

46' The second half is underway
46' Enocent Mkhabela (SuperSport Utd) is cautioned.

Welcome to the live play-by-play for the ABSA Premiership 2015/16 match between Chippa United and SuperSport Utd at Nelson Mandela Bay Stadium.

SuperSport United claimed their first win Absa Premiership win since the opening weekend of the season and snapped a four-game losing streak by beating Chippa United 2-0 on Tuesday night.

Clayton Daniels and Jeremy Brockie scored the goals at the Nelson Mandela Bay Stadium, securing a result which eases the pressure on coach Gordon Igesund and denies the Chilli Boys a hat-trick of victories.

Chippa had the first clear sight of goal, with Mark Mayambela presented with a chance in the 20th minute, but United goalkeeper Ronwen Williams produced a fine save to keep the score line blank.

A short while later James Okwuosa got on the end of Nkosinathi Mthiyane’s corner kick, but he was unable to direct his header on target, with the Chilli Boys continuing to search for an early lead.

Instead it was SuperSport who broke the deadlock late in the half, with defender Clayton Daniels finding the back of the net with a well-placed header from Thuso Phala’s corner kick in the 41st minute.

Chippa made two attacking changes early in the second half, sending on Lerato Manzini and Kuduku Maleasenya, but they nearly went two goals down just past the hour mark when Phala played a one-two and looked likely to score until the intervention of goalkeeper Daniel Akpeyi.

The second goal from United finally arrived in the 85th minute when Jeremy Brockie showed great technique to finish off a cross from Phala, securing the win and three precious points for the Tshwane side.

The victory takes SuperSport from 14th on the log to 11th, with eight points from as many matches. Chippa drop one place to 10th with 10 points from eight matches.

Chippa United will chase a hat-trick of wins in the Absa Premiership when they host SuperSport United at Nelson Mandela Bay Stadium on 27 October 2015, kick-off at 19h30.

Chippa claimed a second successive league win when they beat Maritzburg United 2-0 away on October 21.

The Eastern Cape side has claimed seven points from three home matches this season.

The Chilli Boys are placed ninth on the Absa Premiership log with 10 points from seven matches.

SuperSport suffered a fourth successive league loss when they were beaten 2-1 at home by Golden Arrows on October 20.

The Tshwane side has claimed one point from two away matches this season.

Matsatsantsa are placed 14th on the Absa Premiership log with five points from seven matches.

In head-to-head stats, Chippa and SuperSport have met in four league matches since 2012/13.

Matsatsantsa have an unbeaten record in the sequence, with three wins to their name and one draw from the teams’ first meeting.

Last season Matsatsantsa completed a league ‘double’ over the Chilli Boys, winning 1-0 in Tshwane and 2-1 in the Eastern Cape.

A SuperSport attacker has scored a brace of goals in each of the team’s two away matches against Chippa: Erasmus in 2012/13, Manyama in 2014/15.