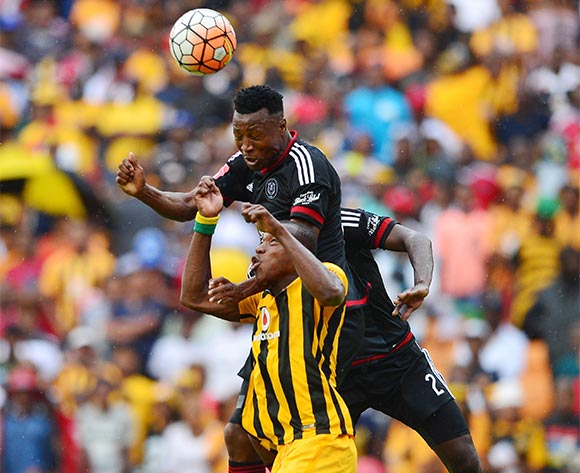 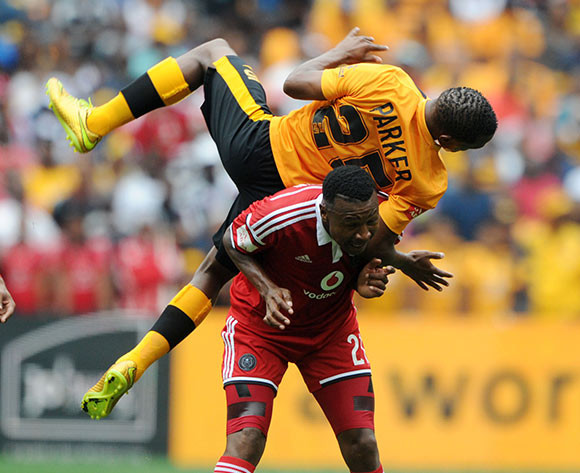 Welcome to the live play-by-play for the ABSA Premiership 2015/16 match between Kaizer Chiefs and Orlando Pirates at FNB Stadium.

1' The match is underway!
2' Both teams wear their famous traditional colours: gold and black for Chiefs, all black for Pirates.
3' Chiefs with the first corner kick, Tshabalala's delivery is well defended by the Bucs backline.

4' Sangweni gets a talking-to after a clumsy, late challenge on Manqele.
5' Manqele limps off to receive some treatment after the foul, hopefully nothing more serious than a dead leg.
6' The Chiefs striker is back on the field and okay to continue...
8' Pirates with their first corner kick, but the delivery from Makola is poor. Attacking chance wasted.

9' Both teams still trying to find their feet in this game.
10' Rakhale with some nifty footwork to get the crowd humming.
12' Bukenya almost gives the ball away in a very dangerous position, heart-in-mouth moment for Chiefs fans.
13' The ball ping-pongs around the Chiefs box, but ends up safely in the hands of Khune.
16' Erasmus with a tame long-range shot that drifts well wide of Khune's goals.
17' Rakhale volleys on target from long range, but Khune is able to make a comfortable save.
19' Bucs look the better team so far, Chiefs have been unable to get their passing game going.
20' Chiefs' defence has been guilty of giving the ball away far too often, it must a big concern for coach Steve Komphela.
23' Midway through the first half, still goalless in the Soweto derby.
24' It's no surprise really: the last five league meetings of these two teams have produced just five goals.
25' Good covering from Bukenya to come across and tackle Erasmus down Pirates' right flank.
26' Issa Sarr (Orlando Pirates) scores!

27' Pirates break the deadlock! Sangweni heads on target from a free kick, Khune makes a good save but Sarr turns home the rebound!
29' Maybe that's the wake-up call Chiefs need to get going, they really haven't been at the races...
30' Up to the half hour mark, 1-0 to Bucs.
32' Amakhosi still look unsure and disjointed. They're being completely outplayed in midfield.
33' The team in gold and black can't seem to get their creative players on the ball...
34' Erasmus crosses from the right, the ball evades Gabuza but falls kindly for Matlaba, who scuffs his shot and misses a great opportunity!
36' Chiefs will be lucky to go in at just 1-0 down at half time unless they improve dramatically in the next few minutes.
38' Sarr is back on the field after receiving some treatment for a knock to the head.
39' Tshabalala crosses from a corner, but it's well defended by the team in black.

41' Letsholonyane picks the wrong option for a pass and a promising Chiefs attack fizzles out.
42' Erasmus cracks a long range shot... way over the target.
44' Erick Mathoho (Kaizer Chiefs) scores!

45' Chiefs draw level from a set piece! Tshabalala provides a perfect cross from a free kick wide left and Mathoho gets free at the back post to power home a header!
45 + 2' Thandani Ntshumayelo (Orlando Pirates) is cautioned.

46' The second half is underway
49' Chiefs with the first corner kick of the second half, but Pirates end up with the free kick for some pushing in the box.

50' Lebese with an early cross, but it's too strong for either Abraw or Manqele.
51' Rakhale cuts inside from the right and looks to shoot, but his effort is blocked.
52' Makola gives away a free kick just outside the 'D' of his box, great attacking position for Chiefs.
54' Tshabalala shoots from the free kick... just wide!
55' Ayanda Gcaba (Orlando Pirates) scores!

56' Gcaba scores with a well-placed header from a corner kick, Bucs back in front at 2-1!
58' Pirates looking confident after the second goal and they have another corner kick coming up...
59' This time the corner kick is well defended before Rakhale shoots ambitiously from long range and misses the target.

60' Manqele with a turn and shot, but it's an easy save for Mpontshane.
62' Gcaba with a long throw-in which causes some consternation in the Chiefs defence before they are able to clear their lines.
64' Siyabonga Sangweni (Orlando Pirates) is cautioned.

65' Tshabalala delivers from a free kick, Mpontshane makes an easy catch.
67' Makola shoots on goal from a free kick, but it's straight at the wall.
68' Ntshumayelo with a terrific run back to track Abraw before making an excellent tackle in the box.
69' Gabuza powers forward and Khune has to come out and make a brave save at his feet! The best chance of the game from open play...
70' Khune saves from Makola's dipping shot but the ball goes straight back into the danger zone! Luckily his defenders are on hand to clean up.
71' Kaizer Chiefs: Bernard Parker replaces George Lebese

73' Erasmus' dipping free kick almost catches out Khune, but lands on the roof of the net. Now Erasmus with a left-footed shot, Khune with a fingertip save!
74' Sarr with a header on target, Khune makes a great save with his feet!
76' Less than 15 minutes left, can Chiefs get back into this?
77' Erasmus crosses for Makola, who can't get over the header and another chance goes a begging.
78' Kaizer Chiefs: George Maluleka replaces Edward Manqele

80' Ntshumayelo with a fierce shot from outside the box... just wide!
81' Makola shoots on target, easy save for Khune.
82' Gabuza with another great chance, another fine save from Khune! The 'keeper has been excellent today!
83' Thamsanqa Gabuza (Orlando Pirates) scores!

84' The third goal finally arrives for Bucs, with Erasmus having a brilliant run before teeing up Gabuza to have a tap-in!
84' Orlando Pirates: Edwin Gyimah replaces Thandani Ntshumayelo

90' Into the final minute of regulation time, this will be a famous win for Bucs!
90 + 1' There will be four minutes of added time.
90 + 3' Mpho Makola (Orlando Pirates) is cautioned.

Welcome to the live play-by-play for the ABSA Premiership 2015/16 match between Kaizer Chiefs and Orlando Pirates at FNB Stadium.

Goals from Issa Sarr, Ayanda Gcaba and Thamsanqa Gabuza took Orlando Pirates to their first Absa Premiership win over Kaizer Chiefs since 2012, as the Buccaneers overpowered their Soweto rivals at the FNB Stadium on Saturday.

Pirates settled the quicker of the two teams and had the first shots in anger, with Kermit Erasmus shooting wide in the 16th minute before Thabo Rakhale volleyed on target a short while later, but Itumeleng Khune was able to make a comfortable save.

Bucs’ dominance was rewarded with a goal in the 26th minute. A free kick from Mpho Makola to the far post was headed on target by Siyabonga Sangweni – Khune made a fine initial save, but the rebound was turned home by midfielder Issa Sarr.

Pirates were completely dominating the first half but failed to take advantage of a great chance to double their lead in the 34th minute when Thabo Matlaba scuffed his shot from an Erasmus cross.

And the team in black was made to pay in the 44th minute when Chiefs drew level through a well-worked set piece. Siphiwe Tshabalala provided a perfect cross from a free kick on the left and Erick Mathoho arrived unmarked at the back post to power home an equaliser.


It was the Amakhosi’s only attempt at goal in the whole of the first half, but enough to leave the game locked at 1-1 at the interval.

The theme of set-piece goals continued 10 minutes into the second half when Pirates reclaimed the lead from a corner kick. Erasmus’ delivery picked out an unmarked Gcaba in the middle of the box and the defender was able to beat Khune’s left hand with a well-placed header.

As the second half wore on, Bucs looked more likely to add to their advantage and Chiefs needed Khune to make a couple of good saves to keep them in the game. The keeper made a particularly brilliant improvised save with his feet to keep out a point-blank header from Sarr in the 74th minute.

Just under 10 minutes later the third goal finally arrived for Pirates, with the excellent Erasmus bewitching Mathoho with a superb jinking run before teeing up Thamsanqa Gabuza to score with a tap-in.

Kaizer Chiefs will look to add to Orlando Pirates’ woes when the teams meet for an Absa Premiership match at FNB Stadium on 31 October 2015, kick-off at 15h30.

Chiefs recorded their third league win of the season when they beat Black Aces 1-0 at home on October 27.

The Soweto side has claimed seven points from three home matches this season.

The Amakhosi are placed fourth on the Absa Premiership log with 14 points from eight matches.

Pirates suffered a second successive league loss (and their fourth defeat in seven such matches) when they went down 2-0 at home to Golden Arrows on October 28.

The Soweto side has claimed one point from three away matches this season.

The Buccaneers are placed 13th on the Absa Premiership log with five points from seven matches.

In head-to-head stats, Chiefs and Pirates have met in 59 league matches since 1985.

The Amakhosi have 24 wins compared to 12 for the Buccaneers, while 23 matches have been drawn.

Chiefs have won 13 of their 28 home matches against Pirates, suffering five defeats in the process.

Last season the Amakhosi took four points off Bucs, winning 2-0 away before playing out a goalless stalemate in the return game.

Four of the teams’ last six meetings have ended in draws.