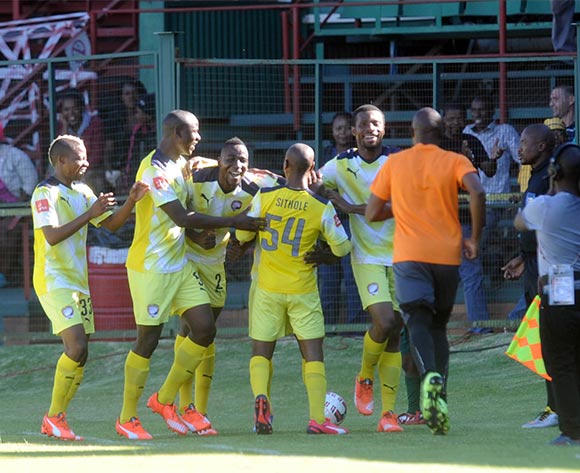 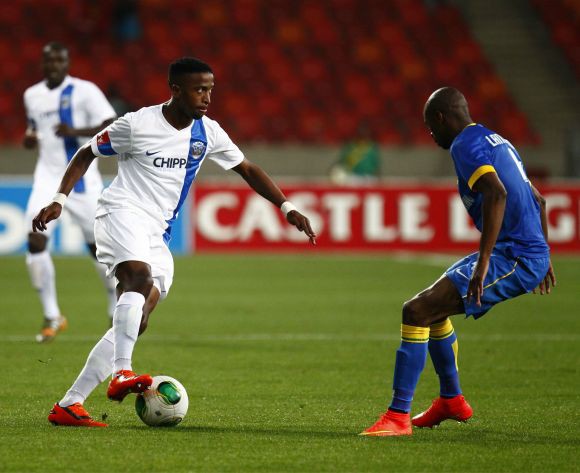 William Twala of Chippa United taking on Langerman of Sundowns

Welcome to the live play-by-play for the ABSA Premiership 2015/16 match between Jomo Cosmos and Chippa United at Olen Park.

27' Brice Aka (Jomo Cosmos) takes a penalty kick on goal.

Welcome to the live play-by-play for the ABSA Premiership 2015/16 match between Jomo Cosmos and Chippa United at Olen Park.

Four goals in the first half saw Jomo Cosmos beat Chippa United 4-3 in an Absa Premiership match at Olen Park on Sunday afternoon.

The win is only Cosmos’ second of the league campaign and sees them up to 14th place with ten points from 11 games, five points clear of the relegation zone.

Jomo Cosmos recorded their second win in a seven goal thriller after beating Chippa United 4-3 in an Absa Premiership match at Olen Park on Sunday afternoon.

Cosmos started the better of the two teams and made their pressure tell in the 20th minute when Charlton Mashumba found the back of the net with a clinical finish from just inside the box, 1-0.

Six minutes later Cosmos were able to double their lead from the penalty spot courtesy of Brice Aka after Sandile Zuke handled the ball inside the box, 2-0.

Trying to implement some positive change Chippa took off Andile Mbenyane in the 29th minute and replaced him with Rhulani Manzini.

Matters got even worse for Chippa just after the half hour mark when Pentjie Zulu found the back of the net for Cosmos after turning home a pass from Thabang Monare, 3-0.

In the 37th minute the Manzini substitute paid dividends when he managed to pull a goal back for Chippa after being put through on goal by Aristide Bance, 3-1.

Cosmos, though, quickly hit back with their fourth goal after powerful finish from Sipho Mngomezulu three minutes before half time, 4-1.

Chippa came out firing in the second half and controlled the flow of the game, but they struggled to break down the Cosmos defence.

That was until the 70th minute when Aristide Bance found Chippa’s second goal after a well-worked passing movement allowed him to find some space, 4-2.

Chippa set up a frantic final five minutes when William Twala got onto the end of a Manzini pass and made it 4-3.

Chippa threw number forward in attack after that, but Cosmos managed to hold on for the win.

The loss was Chippa’s sixth of the season sees them in eighth place on the table with 13 points.

Jomo Cosmos and Chippa United will battle for three Absa Premiership points when they meet at Olen Park on 22 November 2015, kick-off at 15h30.

Cosmos suffered a fifth defeat in their last seven league matches when they were beaten 3-1 at Bidvest Wits on November 8.

The Potchefstroom-based side has claimed five points from as many home matches this season.

Ezenkosi are placed 14th on the Absa Premiership log with seven points from 10 matches.

Chippa suffered a second defeat from their last three league matches when they were beaten 1-0 at home by Mamelodi Sundowns on November 4.

The Eastern Cape side has claimed three points from four away matches this season.

The Chilli Boys are placed eighth on the Absa Premiership log with 13 points from 10 matches.

In head-to-head stats, this will be the first top flight league meeting between Cosmos and Chippa.