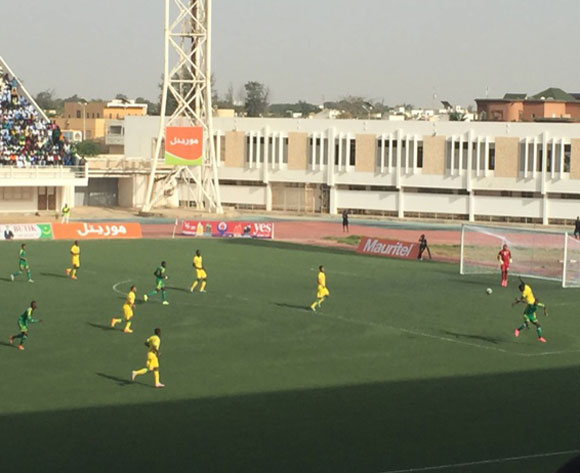 Ismael Diakite netted very late to seal Mauritania's 4-0 victory over a hapless South Sudan side, and the Les Mourabitones won 5-1 on aggregate over the Tigers on Tuesday night.

The 2018 FIFA World Cup qualification (CAF) first round second-leg encounter was played at the Stade Olympique, in Nouakchott.

The Les Mourabitones, and Tigers had played to a 1-1 draw in the first-leg encounter at the Juba National Stadium, Juba in South Sudan on Thursday.

It took only four minutes for Mauritania to break the deadlock through Ahmed Khalil much to the delight of the home crowd.

Les Mourabitones were unable to score another again in the first-half as the Tigers managed to contain them until the referee blew the whistle for half-tim.

Nevertheless, the home side did double their lead in the 62nd minute through their 20-year-old striker Boubacar Bagili.

Les Mourabitones continued to press the South Sudan defence for more goals, and Moussa Samba made it 3-0 with five minutes left on the clock.

African football giants Tunisia will be Mauritania's next opponents in the World Cup qualification second-round in November, 2015.

Mauritania look to down South Sudan in WC qualifier

Mauritania will hope to wrap up their 2018 FIFA World Cup preliminary round qualifiers with a win as they host South Sudan for a second leg match.

The hosts went to South Sudan and managed to come back with a point following their 1-1 draw on Thursday last week, and a win is a must at home as they’d like to progress through to the next round.

Known as Mourabitones, the hosts will be boosted by the fact that they have continued with their three-match unbeaten run.

Coach Corentin Martins da Silva will look forward to leading his team to another victory and will be inspired by their 3-1 win over South Africa in their previous tie at home back in September.

Key players such as Boubacar Bagli and Oumar Nd’iaye will have to continue where they left off in Juba and help their team to get a win.

On the other hand, the visiting team will also target a win as they’d like to mark their return to international football with a bang.

Coach Sang-Jae Lee is aware of the task at hand, and he will have to motivate his troops and aim to cause an upset away.

Players such as striker Dominic Abui Pretino, who scored the equaliser last week, and skipper Jumma Ginnaro will be expected to lead the Bright Stars on the day.

The match is scheduled to get underway at Nouakchott, Mauritania on Tuesday, October 13 and the outcome of the match is set to determine who goes through to the group stages.