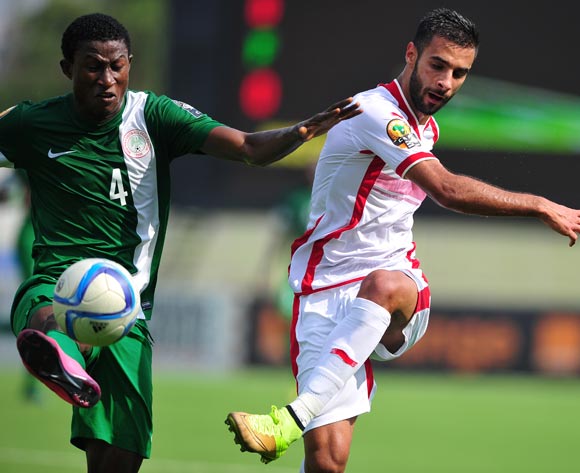 Abdelkader Oueslati of Tunisia gets his pass away as he is challenged by Mohammed Usman of Nigeria during the 2016 CHAN Rwanda game between Tunisia and Nigeria at Stade de Kigali, Kigali on 22 January 2016 ©Ryan Wilkisky/BackpagePix 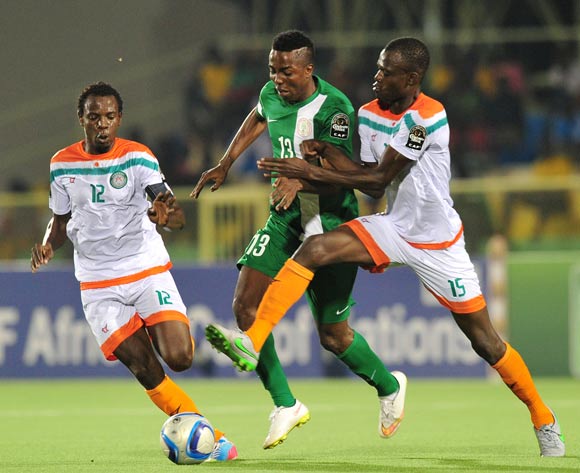 Chisom Chikatara of Nigeria challenged by Katkore Boureima and Souleymane Sakou Dela of Niger during the 2016 CHAN Rwanda, match between Nigeria and Niger at the Stade de Kigali in Kigali, Rwanda on 18 January 2016 ©Muzi Ntombela/BackpagePix

Nigeria remain top of CHAN 2016 Group C after a 1-1 draw with Tunisia on Friday afternoon at the Stade Regional in Kigali.

The Super Eagles have four points from two matches, while Tunisia are second on two points pending the outcome of the other group game between Guinea and Niger later today at the same venue.

On Tuesday, Nigeria will face Guinea, while Tunisia take on Niger in the final group games to determine the quarterfinalists from this pool.

Chisom Chikatara scored his fourth goal to give Nigeria the lead against the run of play, but Tunisia drew level through danger man Ahmed Akaichi after 70 minutes.

The exciting Chikatara was set up by man of the match Osas Okoro to make hay and had the result stayed like this, Nigeria would have joined hosts Rwanda and DR Congo into the last-eight.

However, the North Africans stayed in contention for a place in the knockout stage of the competition when Akiachi turned sharply inside the box to fire home after he was set up by co-striker Essifi, who was brought in to improve Tunisia’s attack.

Tunisia piled pressure in search of a winner thereafter with a diving Ezenwa deny Hamza Mathlouthi a minute from full time.

The Carthage Eagles of Tunisia dominated play and their goal by Akiachi just before half time ought to have stood after television replays showed the ball had not crossed the line before it was crossed for the Etoile du Sahel striker to head past Nigeria goalkeeper Ikechukwu Ezenwa.

The first half therefore ended  goalless with Nigeria playing below par.

The North Africans started the game the brighter of the two teams and Nigeria goalkeeper Ikechukwu Ezenwa had to pull two big saves in the 14th and 27th minutes to deny Tunisia.

Nigeria’s biggest chance was in the 11th minute, when Ifeanyi Matthew powered a shot from inside the box which goalkeeper Rami Jeridi somehow got a hand to.

The Eagles dangerous runs down both flanks were missing as both Prince Aggreh on the left and Osas Okoro on the right failed to go behind the Tunisia back four.

Aggreh would later be replaced late in the game by Ezekiel Bassey.

Orji Kalu stabilised the shaky Eagles defence when he came on at the start of the second half for Stephen Eze to curtail the danger posed by Akaichi.

Nigeria will book a place in the last-eight of the 2016 CHAN in Rwanda with a win over Tunisia in Kigali on Friday afternoon.

Nigeria lead Group C after a 4-1 thumping of Niger in their opening game on Monday with Tunisia and Guinea splitting the points after a 2-2 draw.

Etoile du Sahel striker Ahmed Akaichi was the man of the match for ‘The Carthage Eagles’ with his brace and he will be the man the Eagles defence will have to watch out for in this encounter.

The Nigeria back four was not really tested by Niger, but will most likely be stretched by the North Africans, who won the 2011 CHAN in Sudan on their debut.

Abia Warriors central defender Austin Obaroakpo has served out a one-match ban after his bookings in the qualifiers against Burkina Faso, but it is left to be seen if coach Sunday Oliseh will want to change the new pairing of Stephen Eze and Orji Kalu after the preferred Jamiu Alimi bombed against Niger.

The two other selection dilemma for Oliseh will be whether to start hat-trick hero Chisom Chikatara ahead of Tunde Adeniji, who was ineffective against the Mena save for his assist for Osas Okoro to open scoring in the second half against Nigeria’s next-door neigbours, and also if the experienced campaigner Bartholomew ‘Mosquito’ Ibenegbu should again start ahead of the younger Usman Mohammed, who replaced him and did far more in the 20 minutes he was on the park.

Against Guinea, the Tunisia defence was slow and ponderous, and it is expected that Nigeria will employ the speed and mobility of wide midfielders Okoro and Prince Aggreh to get behind them.

Oliseh has maintained his young team are up against a team from a better league than that of Nigeria.

“The Tunisians are the favourites because they have a great league and players,” he said.

"I am not saying that we are inferior to Tunisia, we have a good young squad and we are taking it game after game. I am not putting the players under undue pressure.”