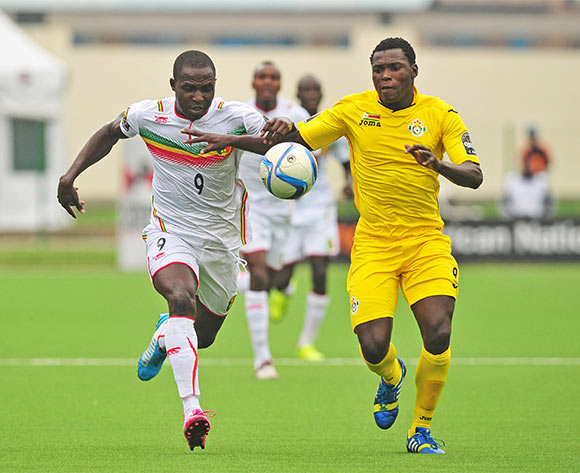 Farai Madhananga of Zimbabwe and Hamidou Sinayoko of Mali battle for possession during the 2016 CHAN Rwanda game between Zimbabwe and Mali at the Rubavu Stadium, Rubavu on 23 January 2016 ©Ryan Wilkisky/BackpagePix 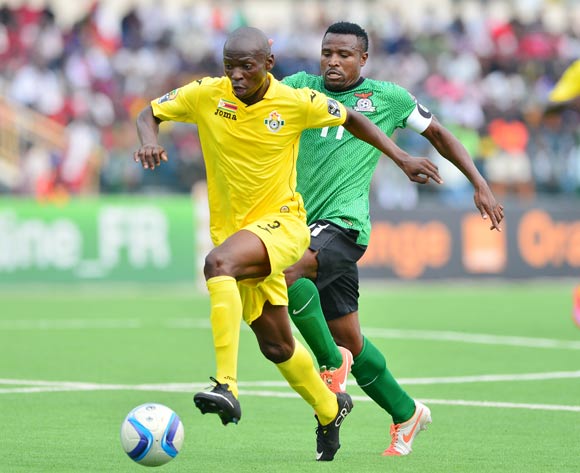 Ocean Mushure of Zimbabwe challenged by Christopher Katongo of Zambia during the 2016 CHAN football match between Zimbabwe and Zambia at the Rubavu Stadium in Rubavu, Rwanda on 19 January 2016 ©Gavin Barker/BackpagePix

Consequently the loss for Zimbabwe sees the brave Warriors crashing out of the tournament and unable to qualify for the quarterfinals.

The win for Mali at the Stade Umuganda in Gisenyi, Rwanda see them up to four points in Group D from two matches while Zimbabwe are firmly rooted to the bottom of the standings with zero points.

Mali started the better of the two teams and saw more of the ball, but their touches in the final third were poor which resulted in no clear cut chances on goal.

Zimbabwe, though, slowly found their footing in the game and had the first real chance on goal in the 17th minute when Farai Edwin Madhanaga fired inches wide from a 24-yard free-kick.

Ten minutes later Mali fashioned their first opening when Sekou Koita cut in from the right flank, but shot narrowly wide from the edge of the box.

Just before the half hour Zimbabwe came bitterly close to break the deadlock when Roderick Mutuma met a right wing cross with a strong header, but he saw his effort come off the left-hand post.

In the 40th minute Ronald Chitiyo should have given Zimbabwe the lead when he found himself in space 14-yards out from goal, but under no pressure he fluffed his shot straight into the arms of the Malian keeper.

It was a fast start to the second half by Zimbabwe as Matuma played Tatenda Marshal Mudehwe through on goal with a clever back-heel two minutes in, but he shot inches over the target from 16-yards out.

In the 55th Mamadou Coulibaly came close for Mali when he headed a corner-kick just over the crossbar.

Ten minutes later Zimbabwean substitute William Manondo drove down the left flank and beat two defenders on his way into the box, but his 16-yard shot from an acute angle was well beaten away by the Malian keeper.

We finally saw the game’s opening goal in the 82nd minute when a left-sided free-kick was worked into the box by Lassana Samake and volleyed home from a couple of yards out by Moussa Sissoko to hand Mali a 1-0 lead.

Zimbabwe tried to find their way back into the match, but were unable to do so as they lost 1-0. As a result they stand no chance of qualifying for the quarterfinals.

Zimbabwe will have to pull out all the stops and grab a win as they face Mali in their second 2015 CAF African Championships Group D match on Saturday in Rwanda.

The Warriors are fresh from a 1-0 defeat at the hands of Zambia in their opening tie on Tuesday and going to the Eagles of Mali means they will have to up their game.

Calisto Pasuwa’s side is the only team in the group with zero points as Mali and Uganda have one each while Zambia have a win, this means a bit of pressure for the Southern African side.

However, Zimbabwean striker Knox Mutizwa believes they can beat the West Africans and maximise their chances of reaching the next stage.

“It is unfortunate that we lost but we now have to quickly put that behind us and focus on the match against Mali,” said Mutizwa.

“After our match, we watched Uganda playing Mali and we saw that they’re physical and quick but I think we can handle them.

“I think we are faster than the Malians and we pass better. What is important is how we carry ourselves in the next game

“We have to show character and rise again, I believe in this team and I think we can win against Mali.”

On the other hand, Malian coach Djibril Drame said Zimbabwe will be a different side and welcomed the point against the Cranes.

Drame will be inspired by the fact that his charges netted two and will hope to see the same performance from his side.

“The first game is always important and to have a point is better than nothing,” Dramé said,

“Our next game is against Zimbabwe. They eliminated us at the quarters two years ago in South Africa but things are different now. It is not the same team, same players, same environment and same kind of preparation so it will be a different game.”

The clash is scheduled for Saturday at Stade Umuganda in Gisenyi at 13:00.